The chemistry between Christopher Daniels and Frankie Kazarian is obvious on-screen, and their TNA tag team title reigns validate their in-ring skills. During a TNA conference call on Wednesday, they proved that it is not just an act, as they joked and laughed their way through questions from around the world.

In fact, having met and talked with both wrestlers on their own, this hybrid concoction of the two of them together as Bad Influence is something altogether different, as the volume is turned way up and the bragging goes to surprising levels. 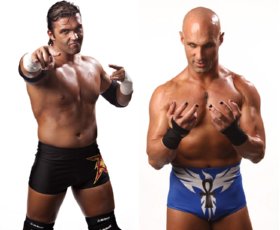 “I want you guys to know that it isn’t like we just opened up a Christmas gift. This isn’t something that we just found in ourselves. This has been us from the very first,” said Daniels. “And I hate to say ‘I told you so’ to TNA, but I told you so! If you’d just given us the microphone in 2004, 2005, 2006, you could have been enjoying the seventh year of Bad Influence. But now you’re enjoying the second year of Bad Influence. The world is watching, the world is listening, the world is raving about the talent of young Francois Kazarian and yours truly, Christopher Daniels — and they should be, because we’re awesome. We’re the reason that people are watching the show, we’re the straw that stirs the drink. The girls want to be with us and the dudes want to be just like us. That’s what’s happening. That’s Bad Influence, not bad meaning bad, but bad meaning good.”

Compared to the bouncy, boastful Daniels, Kazarian is almost subdued, but not humble.

“It’s satisfying to finally have an opportunity, and to go out there and talk and to be us,” he said. “None of this is stuff that’s written. It’s literally us, it’s us talking. We’re not playing characters, we are us. That is more refreshing than anything. We’re not going out there portraying someone else. This is just us, doing our thing, telling the truth, having fun. It’s satisfying to have that opportunity, because in the past, the opportunities never really presented themselves. But now they do and we hit a home run every time we go out there and do it.”

Creatively, Bad Influence claim that everything they have done on Impact to entertain has been their ideas, from the appletinis, to the Gangam style dancing, to Throwback Thursdays with 1980s Zubaz pants. Though a couple of things, like the dancing, can come from a dare, they admitted. “A lot of times people don’t think we have the balls to do certain things and we do them,” said Kazarian.

This Sunday at the TNA Genesis pay-per-view, Daniels takes on “Cowboy” James Storm in a singles bout.

They know each other very, very well, having been foundations from the very start of the company.

“I’ve seen James Storm from the very beginning. I’ve watched him grow from a tag team wrestler, a man who was basically just half of two great tag teams, and I’ve seen him become a great singles star on his own,” said Daniels, who said if Storm was a comic book character, he’d be Mighty Mouse. “But the truth of the matter is, no matter how great James has become, he’s never going to be as good as me. I’m always one step ahead. I’m always one year ahead. The experience factor I have over James Storm is legendary, and I’m going to use that experience to my advantage on Sunday.”

“Let me correct you on that. James Storm cheated and kicked me with his boot spur, and got a tainted victory — which I’ve contested and it’s up in the air right now,” Kaz corrected. “Anyhoo, I’ll be in the house this Sunday because, let’s face it, James Storm, his whole career in TNA has been a liar, a cheater, a scoundrel, a scallywag. A Chris Daniels, his whole TNA career, has been nothing but forthright, honest, and upstanding. So I’m going to be there to fight the good fight, like I have been. Chris Daniels does not need my help to beat James Storm, but I’m going to be there just in case. Call me an insurance policy.”

Daniels and Kazarian have been friends for a long time now, going back to days together on the California indy scene.

“In this business, let’s be honest, you make very few friends and a whole lot of acquaintances,” said Kazarian. “We’ve been lucky enough to be friends for the better part of 15 years. That obviously translates into the ring. And yes, we are having fun, because it’s great to be us. It’s gelled as a tag team. The funny thing is, you haven’t even seen the tip of the iceberg as far as what we can and what we’ve going to do.”

They have vowed to get the TNA tag team titles back around their waists, and accused the current champs, Chavo Guerrero and Shawn Hernandez, of ducking them and facing lesser challengers like Matt Morgan and Joey Ryan.

“When they decide to give a chance back to the actual World tag team champions of the world, the best tag team the biz-i-ness — that would be Francois Kazarian and myself — as soon as they decide to give us that opportunity again, we’re going to regain those titles,” vowed Daniels.

But can they be a successful tag team without merchandise?

“If you want to get all of our witty and/or funny quotes printed on T-shirts, that would be a lot of T-shirts,” mused Kazarian. “And it would be almost impossible, because we’d have to do it ourselves, since TNA has yet to make any merchandise and cash in on the millions of people asking for it.”

“They could just put our faces on the shirt, and that would be a great seller,” quipped Daniels. 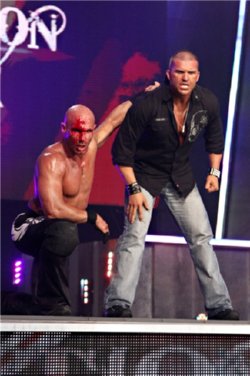 A bloody Christopher Daniels and Kazarian at Destination X in 2012.

“I’m sure there’s meetings in the office about this and it’s just impossible to decide,” surmised Kazarian.

The goal is to stay as a tag team but with more, much more.

“Where is it written that we can’t basically monopolize every title in TNA?” asked Kazarian. “Why can’t Chris Daniels win the World title? Why can’t I win the TV title? And hold the tag team titles at the same time?”

The X Division is always a possibility too.

“We both, at separate times in our careers, basically conquered the X Division,” recalled Kazarian, who praised the talents of Christian York, Zema Ion, and Kenny King. “I’d like to say we were both architects of that division. We both helped built it and establish it. If you have an itch to do that, then scratch it. That itch right now would be Rob Van Dam. … Is that on the agenda? The world may never know.”