More than anything, the recent WWE DVD release Best Pay-Per-View Matches 2012 proves that the past year was the Year of Punk.

Punk, the WWE champion throughout the year, has three separate matches on the DVD release, in three very different matches. He faces Dolph Ziggler from the Royal Rumble, Daniel Bryan from Money in the Bank, and John Cena from Night of Champions. And then there’s another on the Blu-Ray (versus Ryback at Hell in a Cell) to boot.

But it’s the push of the irregular faces that gets me.

Right there at the top of the box is Undertaker versus Triple H from WrestleMania. Brock Lesnar and The Rock are there too. The total matches in 2012 from these guys over the course of the year, combined, wouldn’t match Punk’s output in a month, his current injury notwithstanding. 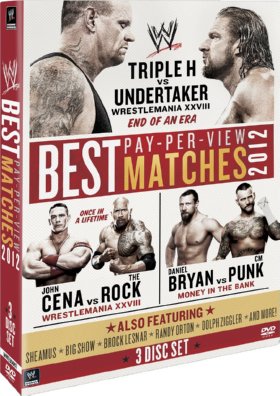 The other note I made about the collection — there are NO tag team matches, nada, zippo; not even on the Blu-Ray.

So what do you get? Ah, good question. Let me run you through what’s on the DVD, hosted by Scott Stanford, and my thoughts on the matches — most of which I was watching for the first time. For the proper recap of the match and the PPV, click on the PPV recap link. Do consider that in order for the DVD to be available by the end of the year, WWE had to choose matches from earlier in the year; hence, there’s nothing from Survivor Series or TLC.

CM Punk vs. Dolph Ziggler – WWE Championship – Royal Rumble, January 29, 2012
No one quite does recapping as well as WWE, and here is the whole Punk versus the authority figure, John Laurinaitis, storyline laid out for us, leading to “Mr. Charisma” acting as special guest referee. Hindsight is 20/20, as they say, and Michael Cole’s line about hoping Laurinaitis would be “leading Raw for years and years to come” wasn’t exactly prophetic. So just a year ago, Laurinaitis was a huge deal, and now he is basically non-existent.

Daniel Bryan vs. Big Show vs. The Great Khali vs. Santino Marella vs. Wade Barrett vs. Cody Rhodes – Elimination Chamber Match for the World Heavyweight Championship – Elimination Chamber, February 19, 2012
Besides the absurdity of The Great Khali being on any sort of “Best of” DVD, this match proved how awesome The Big Show can be when he is on a rampage and mean, and just how over Santino was at the time, filling in for Randy Orton, who was out of the match because of a concussion. (And, to be fair, Khali replaced Mark Henry.) “His stock just went up,” said Booker T of Marella, proving that the writing team doesn’t listen to the commentators or the fans. It’s also worth noting that Bryan would be more over after his WrestleMania blink-and-you-miss-it match against Sheamus than he is here as the World champ.

Triple H vs. Undertaker – Hell in a Cell Match, WrestleMania XXVIII, April 1, 2012
With special guest referee Shawn Michaels, this epic pits HHH against Undertaker for the third time at ‘Mania. What I found jarring was watching a Hell in a Cell match right after an Elimination Chamber bout, where there is no room around the ring for the action. Ironic that Triple H would end the year with a shaved head too, eh, being Mr. Corporate now. The departure of all three together at the end of the battle is a great Mania Moment for sure.

The Rock vs. John Cena – WrestleMania XXVIII, April 1, 2012
This was billed again and again as “Once in a Lifetime” and when I sat through the ridiculous rappers and long entrances the first time, I vowed then it would be “Once in a Lifetime” for me as well with it. So if you take out the Hobbit-like indulgence that sucked the life out of the stadium before the hotly-anticipated match started, I just watch the match and it was still okay — not great, not terrible. The Rock deserves kudos for bringing it like he did. I wouldn’t have booked him to win, but hey, what do I know anyway? In a way, Cena looked like the bigger man for laying down. And there is no way the match could have lived up to the hype either.

Layla vs. Beth Phoenix – Divas Championship Match – Over the Limit, May 20, 2012
So there’s a token women’s match, but not a tag team one, eh? There was a surprising amount of logic and action in this one, and the neckbreaker out of nowhere for the win got me out of my seat. But my mind kept wondering, ‘Did Beth Phoenix know she would be leaving WWE at this point?’

Christian vs. Cody Rhodes – Intercontinental Championship Match – No Way Out, June 17, 2012
This was a good, evenly-matched bout, enhanced by some good announcing that fills in the background and makes it all more believable. Everything Monday and Friday nights should be but aren’t. Christian took a few great bumps that made me forget how long he’s been around.

CM Punk vs. Daniel Bryan – WWE Championship – Money in the Bank, July 15, 2012
After sitting through the “Complicated Situations” recap of the love triangle storyline between AJ Lee, CM Punk and Daniel Bryan, I was looking forward to seeing some great wrestling. And it was, but there was way too much AJ. “Let them wrestle! Let them wrestle!” I did like the fact that, with the inevitable ref bump by special guest referee AJ that it was noted that “with an experienced referee that would never, ever have happened.” After AJ was cleared away, the pace picked up … and then she came back and played with tables and chairs, and their minds. As much as the hardcore ROH-type fan may think that Punk and Bryan are cringing, in fact they are probably really enjoying in, doing something different and expanding their craft.

Triple H vs. Brock Lesnar – SummerSlam, August 19, 2012
The “Colossal Collision” recap leads into “The Perfect Storm.” Notable here is that John Cena versus Brock Lesnar isn’t on this DVD release. Again, thanks to the trusty fast forward, I don’t have to sit through the introductions, which are just way, way, way too long. “This is definitely not UFC,” quipped Jerry Lawler. They do tell a story, both with the working over of HHH’s arm and Lesnar’s stomach, but I just didn’t find it a particularly compelling one.

Randy Orton vs. Dolph Ziggler – Night of Champions, September 16, 2012
Sorry, but I still find The Viper deathly dull. My favourite part of the bout was JBL on commentary, especially when he compared Vickie Guerrero to Farmer Burns, the legendary coach/manager of Frank Gotch. I also liked it when Michael Cole called JBL on acting like a politician and flip-flopping on his opinions as the match changed.

CM Punk vs. John Cena – WWE Championship – Night of Champions, September 16, 2012
As Cole points out, there was a real “big fight atmosphere” with this enjoyable match. I loved Punk’s New York Yankees trunks and boots to piss off the Boston crowd. Despite all the bitching and moaning, Cena hasn’t been just a punch-kick guy in some time, and he proves it here for the hot crowd. Will we get the payoff of Punk using the Rock Bottom soon? Long-range booking could be another theme from 2012 (and 2011).

Sheamus vs. Big Show – World Heavyweight Championship – Hell in a Cell, October 28, 2012
I’m still not totally sold on Sheamus, and I think he needs to really mix it up a little more instead of the same old, same old, but this was a big year for him too. The Big Show is always pretty consistent, and we know what to expect out of him by now.

So, what else can I say? I watched the DVD, not the Blu-Ray (the bonus stuff is listed at right). Not sure there’s anything I’d go back to watch again, other than in historical context, like in a decade when my son is 16 or so and talking about how so-and-so is awesome and cutting edge and speaking his mind, and I’ll throw in this to show him CM Punk at the top of his game.

2 out of 3 Falls Match for the World Heavyweight Championship, Sheamus vs. Daniel Bryan, Extreme Rules, April 29, 2012

SmackDown Money in the Bank Ladder Match: Christian vs. Dolph Ziggler vs. Tensai vs. Santino Marella vs. Damien Sandow vs.Tyson Kidd vs. Cody Rhodes vs. Sin Cara, Money in the Bank, July 15, 2012