Bill Dromo, who passed away Friday at the age of 75, got the “local boy makes good” story written about him in 1963, when he returned to Winnipeg for an AWA bout.

The Winnipeg Free Press newspaper trumpeted “Kid Canadian” and his roots. He was born June 28, 1937 to Mike and Anne Dromo, and grew up in Teulon, 45 minutes north of Winnipeg, where he lived until he was nine, when the family moved to Winnipeg. In the story, Dromo talked about beginning to wrestle at the age of 15 — football was “too rough” — at the Airways Community Club in St. James, under the watch of Dave Piper. 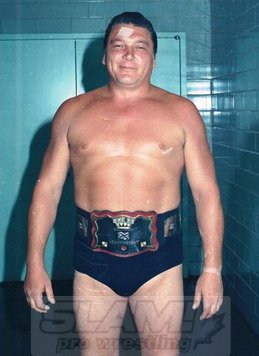 “He wrestled amateur for five and one-half years at the St. Boniface Health Club, presently the Madison Club, before turning pro and seeking fame south of the border,” reads the article, which, if anything, underplays Dromo’s accomplishments as an amateur wrestler.

He was a legitimate heavyweight in the amateur world, and was among the top in the city in the mid-1950s, in the discussion with the likes of older amateur standouts who had turned to pro wrestling, like Gordon Nelson and George Gordienko.

In the 1963 Free Press article, Dromo also makes mention of a new development in his life — he’d met a dental assistant (and part-time woman wrestler) while visiting the dentist in Atlanta. “It cost me $750 to have my teeth fixed, plus a marriage licence,” he grinned. With that dental assistant, Karin, Bill Dromo would have three daughters, Tanja, Kelly, and Denise, over the course of their 52-year marriage.

Superstar Billy Graham wrote about Dromo in his autobiography, thanking the Winnipeger for breaking ranks with the veterans in Stampede Wrestling and offering the rookie Graham advice on where to get proper wrestling gear and lending him size 15 boots until it arrived. Graham took note of the exhausting road in front of him: “Another sobering moment came while sitting in the passenger seat, as ‘Wild’ Bill Dromo drove us to one of the towns in the Stampede territory. I noticed that he’d pinned photos of his wife and children to the sun visor, as close to his face as possible. Because of the profession he’d chosen, his kids were growing up without him. I never mentioned the pictures because they obviously meant so much to him. But I’d study them as we traveled those monotonously endless miles on the snow-covered prairies.”

Before hitting the road, the 6-foot-3, 255-pound Dromo polished his skills as a pro wrestler at the Madison Boxing & Wrestling Club for promoter Gordon Mackie. That led to matches for Tony Stetcher out of Minneapolis. After a stint in the Midwest, based out of Indianapolis, he arrived in Georgia in 1960. The Peach State would be home for the rest of his life, though his wrestling travels took him in many directions: Stampede Wrestling, British Columbia, Japan for the JWA, IWE and New Japan, the WWWF (where he wrestled as Bill Zbyszko), Texas, the AWA, Los Angeles, Florida.

He worked as both a babyface and a heel, his boyish looks a boon for the heroics, his size an advantage as a villain. Dromo took pride in tough bouts, like those he had with Johnny Valentine.

“I made sure I saw my shoelaces on his chest,” Dromo bragged to Steven Johnson about a match in Tampa, Florida. “There was no human being sitting out in that crowd that could have stood what we gave each other. If we had hit them out in the street like that, they wouldn’t have lasted 30 seconds.”

In an interview from 2004 with historian Crimson Mask, Buddy Colt talked about Dromo, whom he wrestled often. “They didn’t use him in Atlanta as a main event, but down in Fred Ward’s towns we must have wrestled 12 or 13 returns. We drew a lot of money down there. Bill Dromo was very believable in the ring, nothing fancy, but a solid worker, kind of like Bob Orton Sr., or even Johnny Valentine. He made you believe his matches.”

The late Skull Von Stroheim (Walter Nurnberg) recalled a little side of Dromo in a February 2001 interview with Scott Teal’s Whatever Happened to … ? newsletter. “Bill liked to gig frogs. He was a real frog eater. One time, we were on our way to Miami and he caught a little alligator. It was two to three feet long. He was driving a Volkswagen and he put it in the trunk. The trunk’s in the front of those old Volkswagens, you know. It knocked the hell out of that hood.” 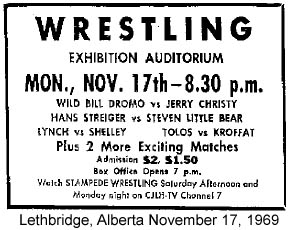 Dromo loved the outdoors, and was involved in his community, including the Shriners and his church.

The must-read interview with Dromo is on the Georgiawrestlinghistory.com website, which also hosts his website. In the lengthy question and answer session, Dromo talks about growing up, hypnotizing chickens, his early days as a wrestler, the trials of the road, and goes into detail about the Atlanta promotion.

“Anyone that has ever met or talked to Bill Dromo knows he is not one to mince words — although he is very careful with them. He is the kind of person who only speaks his mind when he feels something really needs to be said,” wrote Rich Tate in the preamble to the interview.

Titles that Dromo held include the Stampede International tag team belts with Gil Hayes, a tag title in Macon, Georgia with Alberto Torres, the Mid-America tag belts out of Alabama with Tojo Yamamoto, and the Southern heavyweight title out of Florida, and Georgia city belts like the Columbus heavyweight title and the Augusta heavyweight title.

Dromo also worked under a mask as Mr. Griffin, in Griffin, Georgia, and the Super Destroyer in Tennessee for promoter Jerry Jarrett at the tail end of his career.

His last recorded match was in 1982. He ran a restaurant and worked as a security guard until retiring. Dromo had numerous ailments, including a ruptured aorta in December 1996, that required 15 hours of surgery. For the last number of years, he suffered from Parkinson’s Disease.

“Having known Bill for about ten years, this one hurts personally,” wrote Tate. “He was always available with kind words even when it was obvious his health was getting the better of him. He will indeed be missed by many.”

The funeral service will be held at 2 p.m. on Friday, January 4, 2013 in the chapel of West Cobb Funeral Home and Crematory in Marietta, Georgia, with Rev. Bobby Simmons (a former wrestling referee) officiating. Interment will follow at Kennesaw Memorial Park Cemetery. Survivors include his wife, Karin, daughters Denise Walker (Marc), Tanja Matthews (Stan), and Kelly Hicks (Bobby), along with six grandchildren, and other relatives.