Al Mandell, dead at 92, was ‘Forrest Gump of wrestling’

The contributions of Al Mandell to the business of professional wrestling are harder to classify than those that held title belts or made others look good in the ring. Mandell, who died on Wednesday, December 26, at the age of 92, was a jack of all trades, friend of all, with a long, deep reach into history.

Or, as Davey O’Hannon once cracked: “He’s been in this business longer than sweat.”

Perhaps it is best to sit back as this tale might take a while, and it jumps around — a lot. In many ways, it’s almost like a Forrest Gump story for wrestling, a man who was witness to so much.

Albert H. Mandell was born on May 12, 1920, in Barberton, Ohio, to a father, Ben, who was from Russia, and a mother, Dora, from Lithuania. After high school, he worked as a cook in the Civilian Conservation Corps, a New Deal-era program for youth.

He served his country for almost 25 years in the Air Force. During World War II, he was stationed in England, and one of his duties was chairman of the entertainment committee at the base. A long-time fan of professional wrestling, naturally he made a deal to put on some wrestling shows on the base. 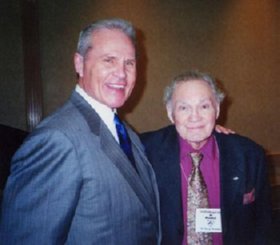 Paul Diamond and Al Mandell at a Cauliflower Alley Club reunion in 2001. Photo by Rose Diamond

As a result of his dedication, he will be buried in Arlington National Cemetery in Washington, DC. According to long-time friend and Executive Vice President of the Cauliflower Alley Club, Karl Lauer, Mandell “was a highly decorated airman, with a chest full of ribbons, but rarely ever talked about his military days.”

He also met his wife, Jill, in England, and befriended grapplers like Ricki Starr, Al Hayes and Jack Laskin.

Jumping back in time, Mandell had already met a lot of wrestlers in Akron.

“I broke into the business working in the office after school,” he once told this writer. The Akron promoter was Carl A. Singleton, and “he was one of Al Haft’s protégés from Columbus.”

When historian J Michael Kenyon asked about Singleton promoting “the first women’s mud-bath wrestling match in the history of the mat game,” Mandell screeched: “Yessir! I helped mix the mud.” (For the record, Mildred Burke of Kansas City beat Babe Gordon of Chicago in this epic struggle.)

Mandell also wrestled, though for anyone who knew him, that might be a bit of a surprise. The lanky Mandell admitted he never weighed more than 165 pounds.

“I didn’t work that much. I filled in spots in Akron, when the first match guy wouldn’t show. I worked maybe a dozen matches all told,” he said in 2008. “The last match I worked was in 1940. I was in the army then, and I came home on leave. I went up to the office to see what was going on. The promoter said, ‘Do you want to work this week?’ I said, ‘Sure, why not? I can always use a couple of bucks.’ That night I worked a match and it went to a Broadway with another local kid there in town. That was my swan song.”

It wouldn’t be wrong to say he had a story about everybody, and many of his friendships went back to those early days.

Like Orville Brown, who was the first choice of the fledgling National Wrestling Alliance to be its World champion in 1948 until a car accident derailed those plans, opting for Lou Thesz instead.

“Now, personally, I don’t think Thesz could have beaten Orville in a shoot,” said Mandell. “I’ve seen them both work many times, and Thesz was good, but again, I quote Bobby Bruns, that when Brown was in his prime, nobody could beat him.”

Bruns, who was one of the most talented wrestlers of the 1940s and 1950s, and later a key behind-the-scenes figure in St. Louis, Buffalo and Oklahoma, was one of Mandell’s great friends through the years.

“Right before I went to Japan in 1951, I met him in San Francisco for lunch one day. Because he knew I was going to Japan, he said, ‘Al, I’ll see you over there.’ I said, ‘You’re kidding me.’ He said, ‘No.’ We corresponded after I left California. So I’m working duty at the NCO one night at the headquarters building. My office phone rang, and here’s Bobby Bruns on the phone. He was calling me from the Haneda Airport in Tokyo. He’d just landed.”

And so Mandell was a party to the initial invasion of American talent into Japan to wrestle in 1951. Mandell was the type who could remember details — in detail. He started to name the other wrestlers who opened Japan up to foreign talent: Ovila Asselin, Andre Adore, Hal Sakata, Doc Len Hall, and Casey Burger.

“I knew them all personally,” he established. “Then Casey got hurt, and Bobby brought Gino Vagnone in, and he worked under the name of Red Vagnone. While they were there, Bobby discovered Rikidozan. He made a contract with him, and sent him back to Hawaii to get trained, and then he came back to California and made a lot of money. … Bobby was the one who found him in Tokyo. And he trained down, he was a sumo wrestler. He trained down and became quite good.”

In 1953, Mandell had been in Japan for about a month on a second tour of duty when he learned that his mother was dying in Pittsburgh. Given a leave, Mandell landed in San Francisco, and called Bruns in the middle of the night, whereupon Bruns arranged to loan his friend money. In Pittsburgh, Mandell picked up the wire and the $500 — the secret code word was “kayfabe.”

Around 1965, Mandell was stationed in Omaha, Nebraska, with the Air Force, and served as the timekeeper at the wrestling shows.

Following his time in the armed forces, Mandell worked for the Charlotte, North Carolina Sheriff’s Department for a quarter century. He was also a long-time member of the North Carolina Boxing Commission.

He would become a key figure in the IWA, the expansionist-minded promotion that Chicago sports mogul Eddie Einhorn started in the 1970s. In late 1975, Einhorn bailed on the project, and Buffalo promoters Pedro Martinez and Johnny Powers assumed control, basing the effort out of Charlotte.

Mandell was called upon by the IWA to try to book venues around the area. The Crocketts already controlled the area, and arenas and ballparks refused the newcomers. An anti-trust suit was filed in Charlotte court.

“We got our hearing in front of city council. Nobody was there from the parks and recreation commission, so they adjourned it for a week,” recalled Mandell. “The next meeting was the following week, and it went back to court. Here was the chairman of the parks and recreation commission sitting in there. The attorney grilled him. Several members of city council were really concerned about that. They asked this guy all kinds of questions, and he’s hemming and hawing, sputtering and coughing.”

It was decided that the buildings should be open for bids, but Powers and the IWA opted against putting in a bid, feeling they would only be outbid by Crockett. “If a bid had been submitted by IWA, that would have shown something in good faith and they would have won the case,” Mandell claimed. “But the Crocketts won the case. That was almost the end of the IWA. … I had to give testimony in court. They subpoenaed me. Crockett brought a big attorney out of Chicago to handle the case, because the local attorney said they felt out of place.”

In his line of work with the Sheriff’s department, Mandell helped wrestlers around town, including Johnny Weaver, who he lined up for a job with the Mecklenburg County Sheriff’s Office.

Despite all the accomplishments and accolades, Mandell’s greatest contribution to pro wrestling was probably through his unwavering commitment to the Cauliflower Alley Club. He was a board member for many, many years, and spread the gospel of the CAC and its charitable ventures wherever he travelled.

“Al also holds the record for getting the most CAC guy to join the club, over his 70 plus years in the wrestling business he has got close to 100 members over the years,” said Karl Lauer of the CAC. “He up until a few years ago would attend every Indy show in North Carolina and always had a pocketful of membership forms.and would pass them out.”

Jason “Wolfman” Sanderson, another CAC board member, paid tribute to Mandell on his Facebook page: “In addition to helping recruit members, he helped keep the memories of some of the ‘Old Timers’ alive, as evidenced by his dedicated championing to get the CAC to honor the Orville Brown before his death. He helped keep in touch with some of the past members and encouraged many to return to the reunions. One of the ones that helped bring, and was kind enough to introduce me to, was the late Lord Alfred Hayes. To be around them when the brandy flowed, you needed a good pair of boots and had to be prepared to laugh!”

Al Mandell passed away on Wednesday, December 26, 2012, from natural causes.

— with files from Steven Johnson and J Michael Kenyon

Greg Oliver, who managed to hook up Johnny Powers and Al Mandell again after many years, can only say, “Rest in peace, Al. Thanks for all the stories over the years.”