To Ring of Honor, the words ‘Final Battle’ signify the last Internet pay per view of the promotion’s calendar year. But to Jerry Lynn, those two words have taken on an entirely new meaning.

“I kind of knew my days were numbered,” Lynn said. “It all started in September of 2010. I had a serious injury and just had back surgery, so that pretty much ended my full-time career. But I thought that I could still continue part-time.”

Earlier this year, Lynn announced that he would indeed be stepping away from in-ring competition forever. But not before he competes in his last few matches, including the one at Ring of Honor’s Final Battle iPPV. 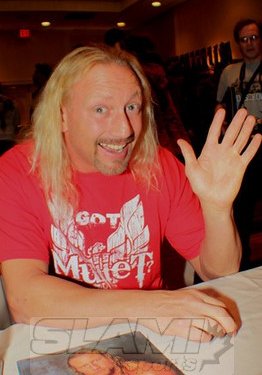 “I wrestled Dan Maff on a Pro Wrestling Syndicate show, and he had a really bad stinger during the match. I didn’t even know anything was wrong until afterwards. But it was right at that moment when I realized that I was kind of pushing my luck,” Lynn said. “It’s a bitter pill to swallow when you realize that you might have to quit altogether.”

As his career winds down, Lynn still finds the time to reflect on the good moments as well. And for a man who has worked in every major promotion, there have been quite a few.

“When thinking of moments that define my career, I always think back to when myself and Lightning Kid/X-Pac [Sean Waltman] finally got some national exposure,” Lynn said. “I remember stepping out into the Sportatorium, which was the same arena that The Freebirds and The Von Erichs used to compete in. It was just so surreal.”

There was a time when smaller wrestlers were never really given a fair chance. But Lynn was certainly able to break that mold and get some exposure on a national level. Eventually, everybody recognizes talent when they see it.

“One of my personal all-time favourites was ‘Hot Stuff’ Eddie Gilbert. He was a booker at the time for USWA and one of my matches really stuck out to him, so he started booking me. It felt really good to have someone like that compliment my work,” Lynn said. “In ECW, there was never a dull moment. It was like a rock tour times 10. Being in WCW was really big for me as well. I felt like I had finally made it at that point. It was the first time that I got to work for a major promotion. The exposure was great, and it wasn’t just about winning titles for me.”

When WCW and ECW both folded in 2001, Lynn had a brief run in the WWE, and actually held their Light Heavyweight Championship for a while. The following year, he jumped on the TNA bandwagon and helped establish the high flying X-Division; in fact, Lynn actually participated in the first match in TNA history. It was a four-way dance to determine the first X-Division Champion, and it was between himself, A.J. Styles, Low-Ki and Psychosis, with Ricky “The Dragon” Steamboat as the guest referee.

“It was an honor to be in the ring with such a legend (Steamboat) and AJ (Styles) and I always kind of joke around, because there were so many false finishes in that match, that Steamboat came up to us afterwards and said, ‘You guys are wearing me out,'” Lynn said. “I had fun feuding with AJ when it first started. A.J. has always been a great guy who never had an inflated ego.”

It was around this time that Lynn’s relationship with Ring of Honor came about as well.

“I knew Gabe Sapolsky from my ECW days. After ECW went under, he was booking for Ring of Honor and saw an opportunity to bring me in. It was very nice,” Lynn said.

That maiden voyage into Ring of Honor impressed Lynn so much that he kept coming back for more. And ROH was always happy to have him; so happy in fact, that they decided to put their World Title on Lynn in 2009, with a victory over Nigel McGuinness.

“I always think of Cary [Silkin] and Syd [Eick] as two of the most honorable promoters that I’ve ever worked for,” Lynn said. “The guys in ROH are all so fortunate that Cary has such a passion for pro wrestling. Even when Ring of Honor was losing money, he was able to keep it going. The fans of Ring of Honor are a lot like ECW fans, and ROH has some of the most talented wrestlers in the world on their roster.”

Another man who kind of made a second home for himself in Ring of Honor this year was Lance Storm, whom Lynn gets set to face on a Pro Wrestling Syndicate show on February 6 of next year. And Lynn and Storm are certainly no strangers to each other.

“Lance and I get along great. I really like wrestling him. He’s such a great wrestler and I know I never have to worry about him hurting me, or anything like that,” Lynn said. “We’ve travelled together for about a year and a half or two years. It’s very difficult to find someone to travel with that you’re compatible with, but it was a pleasure to travel with Lance.”

The next stop on Lynn’s retirement tour will be at ROH Final Battle on December 16, as he prepares to face a man who many consider to be the future of the business, “The Prodigy” Mike Bennett.

“I got to wrestle him (Bennett) in a six-man tag at the Chikara King of Trios show, so I have been in the ring with him before, but not too much,” Lynn said. “From what I’ve seen in the ring and just his ring presence, he just has that ‘IT’ factor.”

Bennett is a guy that Storm knows all too well, considering the trilogy of matches they’ve had this year. “I really enjoyed the time in the ring,” Storm said. “He’s really technically sound, his timing is good, really impressed with the overall presentation of Mike Bennett.”

The final match of Lynn’s career will take place in Minneapolis, Minnesota, on March 23 of next year. It will actually be the 25th anniversary of his debut match in 1988. Although the details regarding his opponent(s) have not been finalized as of yet, Lynn would definitely like to reignite some old feuds.

“It will be great to be back in Minneapolis,” Lynn said. “That’s where it started, so why not end it there?”