This is the eleventh induction class for the Hall of Fame, located in Amsterdam, New York. 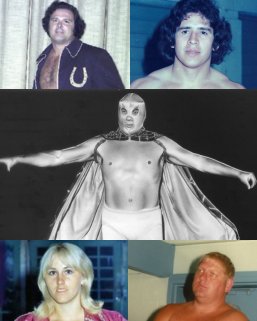 Sandor Szabo and Dick Shikat both enter under the Pioneers section of the Hall.

The Hungarian-born Szabo had a lengthy career, from the 1930s into the 1960s. Heavily promoted in New York by promoter Jack Pfeffer, Szabo would later become a bigger star on the opposite coast. “He’d have that Hungarian accent, and always kept himself in great, great shape,” said Gene Kiniski in 2009. “He was very, very popular with the wrestling crowd in California.”

“Shikat is as good a wrestler as ever lived,” once said New York promoter Toots Mondt. Recognized as one of a myriad of world champions in the 1930s, he was a top performer and a key figure in pro wrestling history. For more see this bio by Tim Hornbaker: Dick Shikat Wrestling History.

In the women’s category, Joyce Grable gets the nod. “The Golden Goddess of the Mat” was a native of Georgia, and broke into the business in 1971, under the Fabulous Moolah (Lillian Ellison). She wrestled for 20 years. For more, see the SLAM! Wrestling story: Joyce Grable to be honoured by CAC

For the International honoree, the PWHF has chosen El Santo. Arguably, there is no bigger star in the history of lucha libre in Mexico. For more, see the SLAM! Wrestling story: The legend of El Santo.

Tito Santana (Merced Solis) really needs little introduction. As a star in the WWF during the national expansion, he was a huge star, at times second only two Hulk Hogan on the babyface roster. After coming out of West Texas State, he tried a little pro football, before settling in to pro wrestling in 1977. He is still wrestling today.

For “Cowboy” Bill Watts, his time as a promoter in the Mid-South territory has often overshone his wrestling career. Like Santana, Watts had played a little football and was an accomplished amateur wrestler as well. He was a main event star in the 1960s, and a consistent performer throughout the 1970s.

Baron von Raschke really does have a German background, but he is not an evil villain by any means. He was a top U.S. amateur wrestler, unable to compete in the 1964 Olympics because of an injury, and turned to pro wrestling after a year teaching. Mad Dog Vachon made him a German villain in the early 1970s, and he was a top star until the mid-’80s, when he retired.

The late Dick Murdoch followed his father, Frankie Murdoch, into pro wrestling. He was a pro’s pro, someone that wrestlers rave about for their talent. To the fans, he was easy to hate. From the late 1960s until the early 1990s, he was an A-one performer. Never one to listen to doctor’s orders, he suffered from high blood pressure and suffered a fatal heart attack in June 1996.

JJ Dillon (Jim Morrison) is the inductee for the Colleague category, though his actual in-ring work was always great too. A wrestling fan growing up, he got a chance to become a referee and pro wrestler, which led to a good career. However, it was as manager JJ Dillon, particularly with the Four Horsemen, that he gained fame. Later, he was a key behind-the-scenes figure in WCW and the WWE.

The Pro Wrestling Hall of Fame put together a video of its 2013 inductees:

Greg Oliver was a member of the Pro Wrestling Hall of Fame Selection Committee for 2013.