Tag team book a study of a lost art

Todd Roberg’s book The Lost Art of Tag Team Wrestling, while a brisk read at 229 pages, is very well written and presents what made tag team wrestling special, particularly in the 1980s.

The self-published book begins with a short introduction in which Roberg explains how he became a wrestling fan and came to appreciate the art of tag team wrestling. Yet, it is in many ways Jerry Jarrett’s foreword where the book’s central analysis begins. In the opening, Jarrett openly discusses how big tag team wrestling used to be throughout the decades and how he feels that the promoters are to blame for it being in the state it is in today. 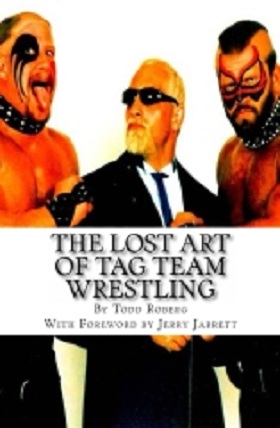 From there Roberg takes the reader through what he considers the last golden era of tag team wrestling, the 1980s, and touches lightly on the 1990s. The book effectively goes through the highlights in tag team wrestling in the 1980s that will bring back pleasant nostalgic memories for someone who grew up during that era.

However, the 1990s Roberg’s cites as the decline in tag team wrestling and perhaps most controversially he does not single out any tag team formed during that decade as being what he considers one of the greatest tag teams of all-time. During the 1990s there were several great tag teams such as the Dudley Boyz, Harlem Heat, The Outsiders, The Hardy Boyz, Edge and Christian, Sting and Luger, and many more, and while the state of tag team wrestling was different during that decade all of these teams were major draws for WWE and WCW.

The book finishes with a listing of the great tag teams from the 1980s and not only takes the reader through what made each special, but also traces the careers of both members of those respective tag teams throughout the various territories, the championships the teams held and any replacement members the teams had. This section is thoroughly researched and provides nuggets on several tag teams that many may not be aware of. Also, sprinkled throughout the book are several black and white photos of various tag teams from the 1980s.

If there is one weakness in the book it is there is a lack of any quotes from members of the various tag teams that Roberg mentions in the book. Quotes from Dillon and Smith Hart help to make up for this deficit to a degree, yet the absence of the aforementioned results in a lack of insight and perspective that would have helped to add weight to the book’s central arguments about why the 1980s were a special time for tag team wrestling and why it declined after that decade. Some additional material on how tag team wrestling started and evolved during the decades leading up to 1980 beyond what was present in the book would have nice too.Despite that criticism though I have to give The Lost Art of Tag Team Wrestling high marks for effectively presenting its arguments in a clear and engaging manner. The book is a great starting point for discussing tag team wrestling, especially if paired with The Pro Wrestling Hall of Fame: The Tag Teams, by SLAM! Wrestling’s Greg Oliver and Steven Johnson. I look forward to Roberg, who wrestled in the Pacific Northwest as Skag Rollins, handling other subject matter in greater depth in the future.