No trust between Survivor Series partners Kofi and Miz

Kofi Kingston is more than a little surprised at the WWE Universe. He didn’t think that, when they were given a chance to vote someone into the open spot on the Team Foley squad for Sunday’s Survivor Series that they’d pick his arch-enemy, The Miz.

“It’s insane to me, man,” Kingston told SLAM! Wrestling. “I saw the options. I thought for sure the WWE Universe was going to vote for Zach Ryder, especially being that he’s the Internet guy.” (Santino Marella was the third option.)

Kingston lifted the Intercontinental championship off The Miz back in October and they are no strangers to each other. 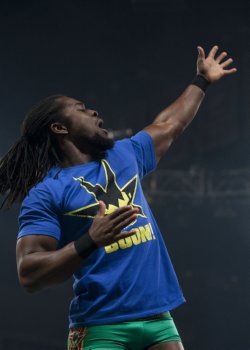 “Who would have thought that you would have seen me and The Miz on the same team?” he queried. “Especially after the past month that we’ve been going at it, going hard at it. We’re definitely two guys that don’t like each other. I’m hoping that we can all put our differences aside for the benefit of the team and we can come through and win — because I really don’t like losing, especially to the likes of guys like Del Rio and Ziggler and Wade Barrett. Hopefully we can put our differences aside, but I’ll definitely have my eyes open.”

WWE.com has reported that Cody Rhodes suffered a concussion and hurt his shoulder at the WWE Main Event taping, and is questionable for the match.

“There is no update as of now,” said Kingston late Thursday afternoon. “We’ll see, man. I know shoulders are very sensitive. I’ve had a couple of shoulder, not injuries, but I’ve hurt my shoulder a couple of times, and it’s very hard to fight through. But I guess we’ll see. We’re ready for anything. We’ll find out. We still have a few days.”

The 31-year-old native of Ghana, who now calls Tampa, Florida home, does not have the Intercontinental title on the line at Sunday’s pay-per-view — “only because it’s Survivor Series” — and relishes the chance to be in a traditional Survivor Series match: “I’m not mad being a part of that.”

But back to The Miz.

Again, it is somewhat mindboggling that he is apparently headed towards a run as a babyface, as much as anyone is a hero these days.

“Apparently there are people who do [like him]. We were in Cleveland for Smackdown, but even in Columbus the night before, people were chanting for him,” said Kingston. “I think it might be one of those situations were people respect his journey. He has a great story as far as sticking with it and pursuing his dream. Even when people told him he wasn’t going to make it, he told them, ‘No, I am going to make it.’ I respect his story a lot. I just don’t like him as a person. He’s very obnoxious and arrogant. Hopefully, I don’t know, maybe he’s turning a new leaf. I guess we’ll all just have to wait and see, because I’m just as anxious as you guys are to see how it’s all going to play out.”

Naturally, the flip side is a possible heel turn one day for the popular Kingston, who moved up to the main WWE roster in 2008.

He’s obviously thought about it.

“I tell everybody this, it’s really up to the WWE Universe,” he said. “The whole babyface/heel role is so blurred these days. Back in the ’80s, you could come out and fight the good fight, like Hulk Hogan would, or guys like Ricky ‘The Dragon’ Steamboat were automatically good guys. Then you had the attitude era where you had Austin that was doing the exact opposite of what they did, and people were cheering him, and booing a guy like Bret Hart who was the ultimate good guy. It really is up to the WWE Universe.

“If I come out there and people stop cheering for me and they start throwing things at me and booing me, then I guess I’m the quote/unquote heel, as they say. Until then, I seem to be pretty well-liked and whatnot, and I like the WWE Universe too. I feed off their energy and everything.

“I guess we’ll wait and see. You never say never in this industry.”

Survivor Series takes place this Sunday at Bankers Life Fieldhouse in Indianapolis. Besides the traditional match, there are four announced title bouts: The Big Show vs. Sheamus for the World Heavyweight Championship; C-M Punk vs. Ryback vs. John Cena in a Triple threat match for the WWE Championship; Eve Torres vs. Kaitlyn for the Divas Championship; and Antonio Cesaro vs. R-Truth for the United States Championship.

Before hanging up, Kingston made sure to get a plug in for the free pre-show free match, which is at 7:30 p.m., streaming live on WWE.com, Facebook.com/WWE and YouTube.com/WWE.

“You can get your wrestling fix started early by watching the pre-show,” concluded Kingston. “That will be a great match too, I guarantee it.”