PERRYSBURG, Ohio — As a wrestler, Mick Foley is known as the “Hardcore Legend” and is a three-time WWE Champion. As a burgeoning comedian, Foley, always known for his timing on the mic, is making his mark at clubs around the world.

Wednesday, he brought his comedic stylings to the Funny Bone just outside Toledo, Ohio for a show that lasted about 75 minutes at a small club in front of a few hundred enthusiastic fans. 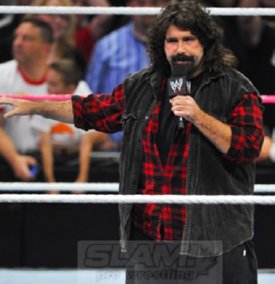 Mick Foley in the ring at Monday Night Raw in Albany, NY, in September. Photo by Minas Panagiotakis, www.photography514.com

Obviously, the large majority of fans there were wrestling fans, many toting Foley’s books to be signed after the show. But even the non-wrestling fans there (mostly women being dragged there by their significant others) seemed to enjoy the humor, most of which centered around wrestling, but is generally funny whether you get it or not.

Foley touched on politics, including the scandal surround former CIA director, Gen. David Petraeus. He talked at length about the power of women’s breasts, noting he’s never won an argument with his wife because of them and how, at a TNA house show (in front of dozens and dozens of fans, he was sure to note) in Germany, he once motor-boated Velvet Sky at the behest of Bully Ray. Well, she made him do the motor-boating.

Many of the jokes were sexually charged, but Foley kept much of the swearing to a minimum for the 19-and-over crowd, only using the dreaded “F-word” about four or five times.

Foley went into serious mode for a bit and noted how there is something you shouldn’t try at home, you should leave it to the professionals, etc. Of course, you think he’s talking about professional wrestling, but no, he was talking about making home sex tapes. He said he might have one, but it won’t be getting out anywhere because HD reveals too many things, the biggest of which is that his wife has large hands. He also took this moment to take a quick jab at Hulk Hogan’s recent fiasco.

Foley also touched on Monday’s controversial Raw segment with CM Punk and Paul Heyman, noting his promo was off the cuff, but also making fun of himself several times throughout the show for his emphatic “HE WAS DEAD!” line.

Foley also encouraged audience participation, welcoming questions that led him off on new topics, one of which included a time when Hardcore Holly exposed Al Snow’s private parts to the world at a 1999 house show in Montreal (which I believe is talked about in one of his books as the “Penis Suplex”), which also brought about talk about male grooming habits.

While much of the audience participation was good, one woman decided to keep going on a completely inane question about spandex. She would not shut up even though she really wasn’t even asking a question. The whole ordeal (and a return to it) took about 15 minutes of precious show time. It also got a little creepy when a guy offered to take a drink out of the same water glass as Foley.

Still, Foley noted at times how his hard in-ring style is making things tough. He made light of his troubles getting around and noted before the post-show meet-and-greet that, because of head injuries, he couldn’t look at a camera with a flash, so don’t be offended if it looks like he’s looking off.

A long line formed for Foley after the show, and he had merchandise to sell, including last year’s tour shirt, which he noted he wanted to get rid of, so he was up for negotiation on the price.

All-in-all, fun was had by all and if Foley is performing in your area, it’s definitely worth checking out. It’s very different to see someone up-close like this in such a different role. His material was pretty good (although he joked he tried out a lot of things on this show that he’d probably be throwing away) and he’s someone who can induce a lot of laughs. I went in saying it should be a good one and I can confirm it was a good one.