WWE ’13 full of Attitude and more

Every year when the newest WWE video game is released, the big question is which classic wrestlers will be included in the game. With such a clamoring for wrestlers of yesteryear WWE started out with WWE Legends of WrestleMania and WWE All-Stars which focused on the Federation Era. Showcasing some of the most popular pro wrestlers of the last 30 years, it only makes sense to continue that winning formula. Now in WWE ’13, wrestlers from the most viewed era of pro wrestling, the Attitude Era, are at your fingertips. 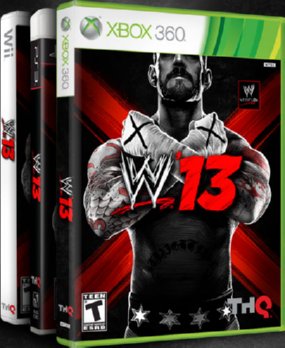 The Attitude Era roster is extensive with 35 characters and replaces the Road to WrestleMania mode of previous versions. Of course Stone Cold, Rock ‘n’ Sock and D-Generation X are included, but lots of mid-card wrestlers like Too Cool, The Brood (Gangrel, Edge & Christian) and the Godfather (along with his hoes) are available. There are some obvious exclusions. While Edge and Christian are available, Team Xtreme (although Lita is in the game) and the Dudley Boyz are not. This is probably just because of their current contracts with Impact! Wrestling rather than an accidental omission.

Now just letting you choose any of these wrestlers at the start of the game wouldn’t make you appreciate them. If you want to unlock the 100-plus items including characters and their alternate attires, cutscenes, video packages and classic arenas, you have to repeat history. This means if HBK is supposed to be disqualified while using a steel chair against the Undertaker, that’s exactly what you have to do in order to progress.

Fortunately, a checklist is on the screen during each match letting you know which objectives you still need to complete in order to duplicate history. If you don’t want the checklist on the screen, a simple button push hides it. You can bring it back any time in the match. Some of the objectives are hidden at first so those who don’t know how a match is supposed to end will be able to experience these matches unfolding in “real time.”

Rather than one long, lengthy campaign, Attitude Era mode is broken up into five chapters, where you control eight of the most iconic pro wrestlers including D-X, Mankind, The Rock, the Brothers of Destruction, Bret Hart and “Stone Cold” Steve Austin.

Told from the perspective of the WWE during the Monday Night Wars, which does acknowledge both WCW and ECW during this time, your main task of these matches is to repeat history. The in-game cutscenes are wonderfully complimented by great video packages which were created by WWE’s own editors. The vignettes shown in the game not only help you understand certain feuds, matches and the changing of the wrestling industry, but also serve as a nice history lesson for those who didn’t witness the Monday Night War era when it originally ran. 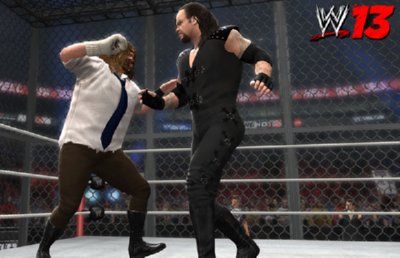 Going back in time to Mankind versus The Undertaker in Hell in a Cell.

While the visuals are certainly nice, it’s not the only thing WWE did to recreate this era. Jerry “The King” Lawler and Good Old J.R. provide commentary for these classic matches, including using actual sound bites from that era. This sometimes leads to unexpected hilarity. Every time any of the classic sound bites are supposed to say “WWF” you only hear them say the “WW” part with a pause.

Regarding the current “PG Era” of WWE, the game seems to have a tough time figuring out the demographics of this game. Certain words are bleeped out and other times they’re audible. The best example is Road Dogg’s entrance music which replaces “Your ass better call somebody!” with “You better call somebody!” Yet when the New Age Outlaws are introduced, Road Dogg’s partner is announced as “Badass Billy Gun” complete with him wearing his “Mr. Ass” tights. Perplexing indeed.

While Attitude Era will probably get the most attention from gamers, it’s not the only update to the series. The Creation Mode has undergone an overhaul. Basically if you want something created, you can do it. This means custom entrances, characters, stables, championships arenas etc. are all available if you’ve got the determination (and the patience). One of the achievements in the game is to compete for a created title, in a created arena with created wrestlers.

For those who haven’t picked up a copy of a WWE game lately, this is definitely one worth getting. Not only can you easily recreate some of the most iconic matches (like the ’98 King of the Ring Hell in a Cell match and the Montreal Screwjob) but with a little thought, other classic matches (like the Bret Hart/British Bulldog Intercontinental title match in England).

I can only hope that the WWE will continue to tap into its history for more games like this. Should you get this game if you’re a wrestling fan? In the words of Hall of Famer Stone Cold: “Hell yeah!”