Gail Kim: Happy in marriage and in TNA

This past year, Gail Kim’s life has changed for the better in a number of ways. She returned to TNA Wrestling, got married, and was recently named by Pro Wrestling Illustrated magazine as the best woman wrestler of the year. When she makes her Canadian return, as part of TNA’s November 9th house show in Windsor, Ontario, she’s hoping the good times will keep on rolling.

“Time flies when you’re having fun,” she said about her recent successes, during an exclusive interview with SLAM! Wrestling. “I’ve been lucky to have this longevity in this business, to have the opportunity to do what I love.” 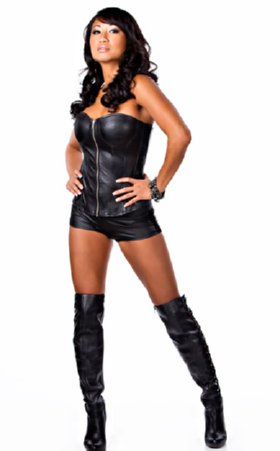 And, in particular, to be able to do it in TNA Wrestling. Kim returned to the company last October after leaving WWE due to admitted frustrations with her role there. In TNA, Kim said, things are a different story, as the women’s division is treated a lot differently.

“(TNA) has really focused on women’s wrestling in a different manner than WWE, and I just enjoy it more here. I’ve experienced both major promotions twice now, and I can honestly say that TNA is a better fit for me.”

During the years she was away from TNA, there were several changes to the roster and even some to TNA’s head office. However, she said there was no problem in returning, and re-finding her place.

“I’ve been in the wrestling business so long now, you kind of cross paths with everybody, so it wasn’t really like starting over from square one,” she said. “So (while) there was some new people, still we all have the same passion for what we’re doing, and share a common goal of trying to make the company bigger and better.”

“I love both aspects of it — working with girls that have been doing it for ten years-plus like Mickie James and Tara, and with those who are looking forward towards the future. And I enjoy being able to help some of the more inexperienced girls that I can help — I remember my first match back was a tag match with Brooke Tessmacher; she didn’t really know that much in the ring back then, but she has come so far in the past year.” 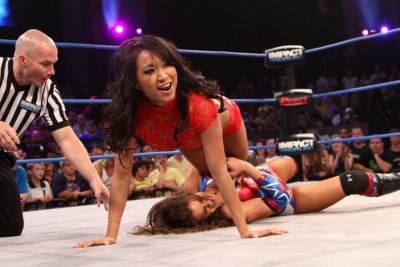 To see how the Knockouts division has evolved over the past few years gives Kim a great sense of pride and accomplishment, having been there when it first started, and being a key player today. Indeed, she has more tenure in the company — and in the business — than many of the roster, male or female.

“A lot of people ask me what are some of my favourite moments of my career. And of course, nights like winning the first Knockouts Championship is one of them. But if you think about the whole picture, the thing that makes me most proud is fighting for that women’s division and it actually happening. It wasn’t overnight, it took a lot of begging and pleading to wrestle. For that to happen, and for it to become successful, that was a dream come true.”

The Pro Wrestling Illustrated award confirms that success, and it’s an honour that Kim is quite proud of.

“After 13 years, and now being a ‘grizzled veteran’,” she laughed, “to be able to do what I love at the best of my abilities, and to be recognized for it, that’s quite an hounour. To be doing well at this point in my career, I’m very happy, and it’s just what I want to keep doing.”

Beyond her in-ring success, the other happy milestone in Kim’s life this past year was her marriage to celebrity chef Robert Irvine (the two met on Irvine’s TV show Dinner: Impossible). Interestingly, while Kim has enjoyed her fair share of fame as a result of her career, she says her husband’s celebrity status is at even another level.

“In wrestling, the fanbase is a hardcore and loyal core group. Whereas his fans range from kids to grandmothers to family. We always laugh at the differences in our fans. He always says to me, ‘Your fans are crazy’ in the sense that they’re so fiercely loyal and so into what we do. It does bring a new spectrum of fans. Now we have everyone — we have the hardcore wrestling fans, and now the kids, the grandmothers, the families, and the foodies. It’s pretty cool.”

So, has there been any thought about combining the two fan-bases by him into the ring?

“No,” she laughed, “I don’t think so. He looks the part, but he’s a softie on the inside. Sometimes, when we play around — I’m very physical, and sometimes I’ll play around with him, and he can’t handle it. He doesn’t like me to say that. I’ll joke around and hit him, and he’ll be like, “Ow, that really hurts, Gail, I don’t like that.'”

Though he was impressed with what he saw when he joined Kim on a tour last year. Sitting at ringside, he got to see what fans in Windsor will get to see on November 9.

“He was blown away by what he saw,” she said. “He was never exposed to pro wrestling before he met me, but he was really impressed with what we offered the fans.”

That’s a common refrain from people who have seen a TNA house show in person. TNA puts on a completely fan-friendly experience, with VIP meet and greet experiences, autograph sessions, and even the chance to visit backstage.

“For the amount of money that a family spends on entertainment, it’s so worth it. You never experience anything like it. The interaction, the physicality, the comedy, everything. Even if you’re not a wrestling fan, it’s nothing like anything you’ve ever seen.”

To get to perform for her fellow Canadians, in a city that she’s very familiar with, will be even more special for Kim.

“Of course, I wrestled in Windsor for Scott D’Amore’s promotion way back in my very early days. That was at the very, very beginning, when I was working under a mask as La Felina. It’s fun to reminisce, it will be fun to be in front of those fans again.

Indeed, the ring is always a fun place for Kim to be in, and she doesn’t have plans beyond being there for the immediate future.

“I’ve always been the kind of girl that takes things by the moment, lives day to day,” she admitted. “Even with wrestling, it was kind of a spontaneous decision for me. I decided one day that I would go to a wrestling school, and fulfil my dreams. Everything just kind of found its way for me. I think things will just happen as they happen, and I’ll take it as it comes. So far, it’s worked out. If I was forced to retire tomorrow, I’d be happy with everything I’ve accomplished. I’m lucky, because not everyone can say that.”