CM Punk DVD lives up to the hype

When WWE first announced that a CM Punk bio DVD was in the works, I was genuinely excited for it. After all, Punk has been one of my favourites since his days in Ring of Honor.

When I found out that the DVD, titled Best in the World was going to be heavy on Punk’s input, I became more excited. The last time I had heard word of heavy wrestler involvement was for Chris Jericho’s DVD and that was easily one of my favourites that WWE has ever done. 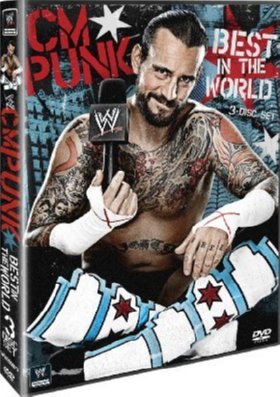 As one could expect, then, the DVD is a true chronicle of Punk’s wrestling career. From his backyard federation in Chicago (though I suspect he exaggerates the the attendance figures a bit) to his time training with Ace Steel and early days pre-Ring of Honor are all covered in great (and I do mean great) depth. Really, this is the first time, including Jericho, that we really get that full spectrum of a wrestler’s work, dating back to the Chris Benoit and Eddie Guerrero DVDs (and this one probably surpasses them).

Throughout this early section, we get the story of Punk vs. Colt Cabana and Punk vs. Chris Hero — including commentary from both foes — which were fantastic. We also get some match clips and while some WWE fans may balk at the lack of full matches included, you have to remember that those were one-hour Broadways, and that’s a lot of time to eat up on a DVD series.

Ring of Honor is up next and we get some really good talk about the early feud with Raven and, of course, his work with Cabana. Samoa Joe is also brought up at length, and this is where the “it’s a real shame” comments start to come in, so let’s be blunt — it’s a real shame that WWE couldn’t get Samoa Joe to offer his take on Punk; it’s a real shame that WWE wouldn’t talk with Raven or then-ROH booker Gabe Sapolsky. And, even though the matches were easily as long as the other Broadways, it’s a real low down dirty shame that we didn’t get any full out Summer of Punk segments; but this is also new territory to WWE — no other wrestler profiled, yet, has come from this level of stardom in Ring of Honor. We’ll see what happens when Bryan Danielson/Daniel Bryan gets his DVD (and I’m ignoring the recently-released Superstar Collection Daniel Bryan).

From there we move into Ohio Valley Wrestling, which was then a WWE developmental territory, and this is where we get “pissed off Punk” and the introduction of him being a “Paul Heyman guy.” This to me is where the DVD really shines, as we see Punk starting to get vocal but learning as he goes along. This is carried through to ECW and his matches with John Morrison (another “it’s a real shame” moment for an in-depth interview) up to WWE, and the real heart of the DVD — the championships.

As you might expect, Punk shows his frustration with his first couple runs with the World Championship, and deservedly so. We start to see more at this point from John Cena and Triple H, and I do have to give both credit, along with Michael Hayes, for being honest and not sugar-coating their thoughts on Punk at the time. Punk’s disdain for that time period, transitioning to his enjoyment in the Straight Edge Society (where again we have an “it’s a real shame” spot with no interview from Luke Gallows). What’s interesting is that the Nexus angle isn’t mentioned whatsoever, but that’s probably for the best, because…

Understandably, this section is a bit rushed. At this point it’s such recent history that there isn’t a lot of meat to really pick over. We get a few promo highlights, some about ‘Mania (without talking enough about the feud with Jericho) and that’s pretty much it.

Now having said all this and accumulating a list of “it’s a real shame” spots that would rival any other DVD I’ve reviewed over the decade plus I’ve been reviewing DVDs on SLAM! Wrestling, you might thing I’m not a fan of this documentary; on the contrary though, I really did enjoy it. The reality is that there is so much covered in the near two-hour doc that if it went longer, it would’ve started to lag. There’s also a good half hour of bonus clips, so you’re really looking at a robust profile of the man known outside the wrestling world as Phil Brooks.

As for match selection? Well, you get what you’d expect pretty much: Punk’s debut in ECW, the title victories, the standout matches, etc. The reality is that even though Punk’s been in WWE for six years or so, he has had far too few longer, intricate matches, and part of that can be blamed on how he’s been booked. The other part? Simply put, you don’t have some of the wrestlers who are “go-to” inclusions you regularly see in documentaries. Kurt Angle and Brock Lesnar are two examples, as are The Rock and Steve Austin. I’m near positive Brock and Punk didn’t battle in OVW, and as for the other three, they weren’t on the active roster at the same time as Punk.

The only fun piece that would’ve been interesting to see that wasn’t included were a couple “enhancement” matches Punk had on HeAT back in the day against the likes of Val Venis.

At this point though, I’m nitpicking for the sake of nitpicking. Really, you cannot go wrong with Best In the World. Get it, right now.