The news of the passing of famed photographer Theo Ehret in May at the age of 91 was slow to reach the boxing and wrestling fans who had marveled at his mastery over the years. It’s a cliché, but where video of John Tolos throwing the dreaded Monsel’s Powder into the eyes of Freddie Blassie in Los Angeles does not exist, the famed angle was caught for all eternity in Ehret’s lens. 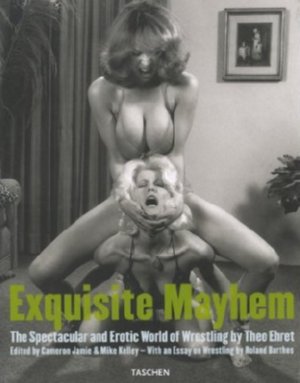 It certainly helped that Ehret had earned the trust of the wrestlers and the bookers, and was often let in on finishes and the timing of the bouts.

“I taught Blassie (in the sixties) to look off in the distance and point. Just point. Never look at the camera directly but tell them to glance diagonally in a straight line away from your lens,” Ehret once told Dr. Mike Lano, one of his students/worshippers shooting at ringside. “That kind of posing creates depth and wonder. And with someone doing a crazy act like Sheik or (Pampero) Firpo, you really don’t have to tell them what to do. They know what they’re doing for the character.”

Dan Westbrook was another ringside photographer in Los Angeles who looked up to Theo (pronounced “TEY-O”).

“In the 1970s-1980s, Theo’s name was synonymous with Los Angeles boxing and wrestling. Theo’s works were always works of art,” said Westbrook, further explaining what made Ehret great — more than just his Rolleiflex camera.”Theo was best known for his use of medium format equipment, particularly 120 size film,” said Westbrook. “His pictures were always quite incredibly detailed. He was a true photographer, as he developed and printed his own pictures at his studio. He captured the essence of action and had a special realism to his posed pictures, some of which he took in his studio. Only one other sports photographer had a special ‘look’ to his photos, Canada’s Tony Lanza. Theo preferred available light photography but excelled at flash photography, which presented other problems. He used special lighting set-ups for the posed pictures, giving them an almost 3-D effect. It was his trademark.” 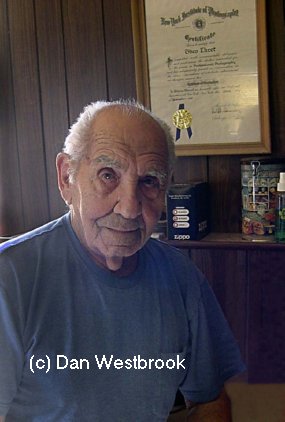 Jeff Walton started at the Olympic Auditorium in 1968 as the wrestling publicist, and convinced the Los Angeles promoter, Mike Lebell, to use more of Ehret’s photos.

“As the years went by I talked Mike into using Theo’s material as he was dependable and if we needed a certain shot for TV we knew Theo could capture it,” said Walton. “When my sons were born Theo was there to take beautiful photos which I still have in my home.”

Ehret was born July 7, 1920, in Mannheim, Germany. Drafted into the German Navy during World War II, he lost a finger during his service, and was interred in a prisoner-of-war camp in Italy.

In 1952, Theo and his wife, Elsbeth, made their way to the United States, arriving in South Dakota and subsequently fleeing south to the warmer clime of L.A. a year later.

Talented with his hands, Ehret fixed cars and saved money to get a camera, as he had learned photography in Germany from an uncle. He furthered his education at Mortensen’s school of photography. In 1963, he opened a studio on Sunset Boulevard in a part of L.A. known as Echo Park. Initially, he did commercial shoots in the public relations world, capturing landscapes and architecture.Shooting boxing at the Olympic was where he rose to prominence. One of the few female promoters in the country, Aileen Eaton, was the face of the Olympic, and the cards there were among the best at the time. The crowds at her shows often filled with Hollywood celebrities. Ehret did the publicity photos for the programs, and shot at ringside. Soon his photos would be appearing in national boxing magazines.

In 1964, Ehret began working with the Olympic’s pro wrestling, which was run by Eaton’s son, Mike Lebell.”Theo was on the Olympic payroll but had permission to do whatever he wanted with the photos because he paid for all his materials himself,” said historian Steve Yohe. “So another source of income was selling his work to the wrestling magazines.”

“Every bit as important as covering L.A. wrestling was Theo Ehret’s contributions to Victory Sports of his vast array of bikini and nude apartment house wrestling photos,” recalled said California wrestler Kurt Brown. “Every one of us teenage newsletter fans back in the 1970s were the same: we would shake our heads and gripe about these pornographic photos that were polluting the pages of wrestling magazines. This lasted until we were were out of earshot of one another, out of eyesight of any family members, and then we would (very politely) salivate all over the pages of the hot mamas in condo combat.”

Exquisite Mayhem, published in 2001, is a coffee-table book that celebrates Ehret’s apartment wrestling photos, as well as his more traditional grappling shots.

Writer David Davis befriended Ehret through various projects, and has worked over the last few years to get a book of his boxing and wrestling images published. In the LA Observed publication, Davis paid tribute to Ehret.”Theo liked to say that he wasn’t a huge fan of boxing or wrestling, that shooting at the Olympic was just another gig. That was part of his inherent modesty,” wrote Davis. “His immense body of work compares favorably with the likes of Charles Hoff, the longtime New York Daily News photojournalist who shot boxing during the 1940s and 1950s.”

According to Walton, there was an opportunity for Ehret to have gotten even bigger fame through the expansion-minded WWF, even though he had suffered a small stroke in the early 1980s.

“In 1985 when I started to work for the WWF in putting their magazine together I told Vince [McMahon] to fly Theo in to the TV tapings in Allentown, PA,” recalled Walton. “Vince was very impressed with Theo and his work. At the time Jimmy ‘Superfly’ Snuka was the hot item. Vince needed a mid-air shot of Snuka. Theo captued a great leap frog over Don Muraco and was so impressed he wanted him to stay on the East Coast and went as far to offer Theo a complete photography studio in New York. But like me, Theo’s home was in Los Angeles and he turned down a very lucrative offer from the WWF titan.”

According to Lano, the wrestling scene in the late 1970s didn’t interest Ehret, and his attendance at ringside was sporadic “because there really wasn’t anything for me to shoot,” Ehret told him. “Fewer and fewer big names were coming in from about 1979 on.” 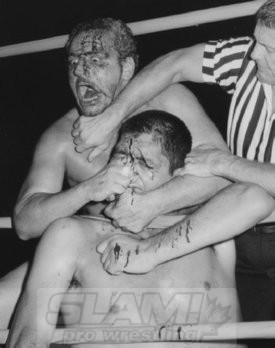 A classic Theo Ehret shot of The Sheik being The Sheik from the Wrestling Revue Archives: www.wrestlingrevue.com

“I began working alongside Theo, shooting wrestling in the early 1970s,” said Westbrook. “He shot for the American magazines and I took pictures for the Japanese press. I found Theo to be very professional and courteous. We both did our jobs and then went home. We continued through the 1980s, even after The Olympic’s wrestling promotion was sold to Vince McMahon and moved into different venues across the Los Angeles and Orange County areas.”

Ehret told Lano that he had been “out of circulation by choice all these years to spend time with my wife.”

It was Lano that convinced Ehret that one last wrestling appearance was a must, and Ehret came out to the January reunion of Los Angeles wrestling at the LAX Westin Hotel, a part of WrestleReunion.

“Mike, how did you get everyone here that’s still living?! Dick Beyer, Billy Graham, Gene LeBell, all the boys are here,” Ehret said to Lano.

“For the occasion, Theo brought along a DVD of his work,” wrote Davis. “For the next half-hour, his black-and-white images transfixed the crowd. Every time a new face appeared on the screen, people started yelling and cheering. Several approached Theo with their copies of Exquisite Mayhem to get his autograph. He was the rock star in the room.”

“He seemed strong and vital,” said Lano about that day with Ehret. Indeed, Davis said that Ehret drove them to the event in his “spiffy BMW.”

“He will best be remembered by those legions of fans who knew he had a true eye for photography and capturing the essence of a master,” concluded Westbrook.

NOTE: This story could not have been written without the contributions of Dan Westbrook, Dr. Mike Lano, Steve Yohe and Jeff Walton. Thanks to all.