“The Manbeast” Rhino has his sights set on championship gold as he clashes with ROH World Champion Kevin Steen at Ring of Honor’s Death Before Dishonor X iPPV in Chicago tonight.

“The company has produced a lot of good talent. Everybody in Ring of Honor is very passionate about pro wrestling,” Rhino said. “Hopefully our styles will mesh well, but I’m definitely hoping to become ROH World Champion in Chicago.”

Rhino is one of the most experienced veterans in the ROH locker room, so it shouldn’t be a shock to anybody if he is looked up to as a mentor. It’s a role that he hasn’t had too many opportunities to fill in his career, but advice is something that he is always willing to give out.

“It’s nice to see so many hungry guys in the locker room. I look at it as my time to give back,” he said. “I don’t want anyone to feel obligated to come to me for advice, but sometimes I get people coming to me and asking if I watched their match, and what I thought. I really appreciate that.” 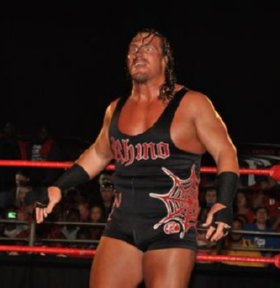 Rhino returned to Ring of Honor in the spring of this year, and clearly hasn’t missed a step. He is always looking to prove himself against some of the young stars in the locker room, and is well aware of what’s in store for him at Death Before Dishonor X.

“Kevin Steen is very talented, both in the ring and on the mic. He’s one of the most over people in Ring of Honor. I’m going to give it my all in this match and hopefully it’ll be a hell of a match,” Rhino said.

One important variable that hasn’t really been brought up on ROH TV lately is the Chicago audience, which has proven to be one of the most volatile crowds in wrestling history. It seems like the days of heroes versus villains have slowly faded away, as tonight’s main event features a heel against an anti-hero. Rhino hopes that his match will be a crowd-pleaser.

“If you have a sh—- match in Chicago, the fans will definitely let you know. They’re a lot more vocal than most fans, but at the same time, that’ll motivate you to work much harder,” Rhino said. “The wrestling business has always had the classic good versus evil story. I’m really only a heel because of my connection with Truth (Martini), but I’ve never crapped on the fans or anything like that.”

Kevin Steen is obviously the most wanted man in Ring of Honor, but despite the odds against him, he is somehow always able to overcome them, and remain the champion. This is partly due to his entourage, consisting of Jimmy Jacobs and Steve Corino, a man whom Rhino knows all too well.

“Steve Corino and I have known each other for a long time, and I’m just glad he’s Kevin Steen’s problem now, and not mine,” he said with a laugh. “We’ve talked here and there, but haven’t had a lot of time to catch up. I still consider him a young guy though, and I still consider myself a young guy as well.”

Kevin Steen and Rhino have an opportunity to create another classic tonight, as they do battle for the ROH World Heavyweight Championship. In addition, new Tag Team Champions will be crowned, as both the semi-finals and finals of the tag team tournament take place before the fans in Chicago Ridge. And Adam Cole takes the challenge of Mike Mondo for Cole’s Television Championship. All of this and more will happen at Death Before Dishonor X tonight.