Rhett Titus tagging in with a new partner

Tag team wrestling will be the name of the game at Ring of Honor’s newest iPPV, Death Before Dishonor X this weekend. Rhett Titus knows that game perhaps better than anybody, but he finds himself in an unusual predicament, as he has to team with a strange bedfellow — a rival Charlie Haas.

“Charlie is a few years older than me, and I can’t really relate to him,” Titus told SLAM! Wrestling earlier this week. “We don’t see eye to eye on anything. It was actually Haas’ idea for us to team up. We can’t relate to each other when it comes to music or movies or anything like that, much less wrestling. But I do respect his credentials.” 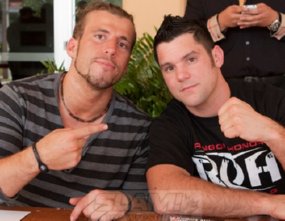 Rhett Titus and Eddie Edwards at a Ring of Honor fan fest in March 2012 in Ft. Lauderdale, Florida. Photo by The Masked SLAM! Wrestling Photographer.

The pairing of Titus and Haas all came about following the departure of Titus’ former partner Kenny King to TNA, which forced Jim Cornette’s hand to set up a ROH tag team tournament. Even though Titus isn’t too thrilled about the situation, he definitely wants to win back the titles that he never lost in the first place.

“It’s hard when you’ve been with one partner for four years and have practiced team moves and everything,” Titus said. “Kenny and I basically had different lengths to our contracts. It’s sad to see him go, but at the same time, I understood why that happened. He was very friendly with everybody and I’m sure everybody’s going to miss him. And I wish him all the best.”

With only four teams left in the tournament, Titus certainly likes his chances of walking away with the gold — or at least half of it. But he is also well aware of his competition.

“As far as the tag tournament goes, I’ve worked with everyone involved in it. The Briscoes are obviously the odds on favourite, as they’ve been together longer than anybody. I’d expect Steve (Corino) and Jimmy (Jacobs) to be out early. And then there’s Caprice (Coleman) and Cedric (Alexander), who are a great team, but still kind of wet behind the ears,” Titus said. “I’m a homegrown ROH guy, and chasing after these titles again has made me a lot hungrier. The tag titles are the launching pad for most guys in ROH.”

As seen with Davey Richards, Eddie Edwards and Adam Cole lately, the tag team championships have often led to singles gold. Even though Titus has really only held those titles for a cup of coffee, he wants them back so he can also serve notice to any singles champion. 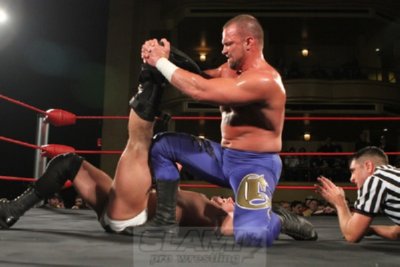 Charlie Haas bends Rhett Titus’s leg in March 2012; they will team to try to win the ROH tag titles this weekend. Photo by George Tahinos

The tag team tournament might be a major attraction at Death Before Dishonor X, but it won’t be the only highlight. Titus is definitely looking forward to some of the other events at the show.

“There are a lot of big things happening this weekend at the iPPV,” Titus said. “A lot of people are debuting like ACH, as well as Tadarius Thomas making his iPPV debut. And just announced, Matt Hardy will be at the show to sign autographs, so that’s something to look forward to.”

The tag team tournament semi-finals and finals will all take place at Death Before Dishonor X this Saturday night at the Frontier Fieldhouse in Chicago Ridge, IL. In addition, Kevin Steen defends his ROH World Heavyweight championship against “The Manbeast” Rhino, and Adam Cole puts his TV Title on the line against Mike Mondo. Plus Davey Richards makes his return to Ring of Honor. All this and more is happening at Death Before Dishonor X.