“Instead of tweeting, what about reading?”

This is the kind of answer you’re going to get if you interview WWE Superstar Damien Sandow. In this day and age where everything is about shoot interviews and breaking character, Sandow brings back the old-school mentality by doing an interview in gimmick. With a persona so culturally savvy, it was nevertheless a real treat to enter the world of the self professed “Intellectual Savior of the Unwashed Masses.” 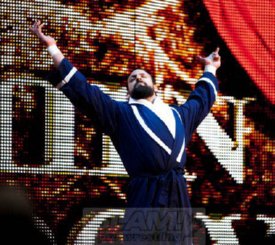 Damien Sandow arrives as only he can. Photo by Devin Chen, www.chdevinphotos.com

The Damien Sandow character started last April on Smackdown, but this was not the first run with the World Wrestling Entertainment for the man behind Sandow, Aaron Steven Haddad. In fact, many will remember him as Aaron “The Idol” Stevens as he worked for the company from 2002-07. How did he change as a wrestler from his first to his second run with the WWE?

“It was more or less when I stepped back and realized that I was the Intellectual Savior of the Unwashed Masses. Upon that realization, everything kind of took care for itself. When I realized the ignorant people needed to be saved, I have taken upon myself to do just that. Things have been working very very well. I don’t think it’s a change of personality, it’s actually who I am,” told Sandow to SLAM! Wrestling. “I don’t have to work harder because this character is really who I am. I’m going to pass or fail on my own, but as the Intellectual Savior of the Unwashed Masses, I do not fail and that’s it.”

Recently, WWE.com released the ranking of the top 25 smartest WWE wrestlers of all-time. Despite the fact that Sandow has just a few months of experience on the regular roster, he was ranked number 12.

But according to him, it was just a huge mistake.

“Quite frankly, I think there was a miscommunication here. I was actually named number one and two. As the Intellectual Savior of the Unwashed Masses, I’m clearly number one, but they thought number one wasn’t a big enough spot for me, so they actually said that I am the first and second smartest superstar in WWE history. It must be a misprint from someone working at [WWE].com,” said the native of Worcester, Massachusetts.

With his anti-pop culture attitude, he’s not really into Facebook or Twitter, he has no idea what the Song-Pop game is, and would rather talk about his favourite philosophers.

“I have studied Socrates and Plato, but their work is partially true, while my philosophy is true. I’m actually working on a lengthy indictment against the moral state of our generation today. It will explain my philosophy, what is wrong with society, how it can simply be changed and quite frankly leading the WWE is simply a step in my plan to enlighten the world,” explained Sandow.

Even with his revulsion for pop culture, his fans can actually see him on Twitter.

“I have my own personal scribe whose name is Ignatius and he’s doing a lot of my tweeting for me,” he clarified.

The only time Sandow broke character was to talk about his mentor and trainer, the late Killer Kowalski.

“It was very unique in my own experience. I was allowed to train there as a 16 year old, when it required 18 to be trained,” he recalled. “As a junior in high school I was the biggest kid, the fastest, the strongest. But when I got to the wrestling school, I was a boy in a man’s world.”

To train with such a legend was quite significant.

“It gave me a work ethic that I still have and that’s the difference between someone who was really trained by Killer Kowalski and people who claimed they were. Guys that came to the Killer Kowalski wrestling school and got trained by him, it’s always that sense to be the best, making people notice you and making people remember you. And if you just look at the track record of the people he trained, it speaks for itself,” he said, more Aaron Steven Haddad than his current WWE personality.

With Smackdown in Ottawa this Tuesday the very last show before the Night of the Champions PPV in Boston — Sandow’s courtyard — and with his recent altercations with Randy Orton and Dolph Ziggler, what can the fans expect from him?

“Well, you know what, a great general never reveals his battle plan, but rest assure I do have a battle plan,” he simply replied.

“Since my crusade has been launched, I have yet to compete in Canada. So it’s going to be my first Smackdown taping in Canada. I will be sharing my philosophies with everybody, which is worth the price of admission alone. This is like a trip to the doctor’s office,” he added modestly.

The night before Ottawa, WWE will be in Montreal the return of Raw to the city after six years. One could think that a person like Sandow, with so much intellectual background, should be able to communicate with the French-speaking fans of La Belle Province.

As he usually does, Sandow has a unique answer to that.

“I have studied French. I have studied the culture, the language and everything like that. But the way people in America speak English is horrible. There’s a battle of linguistic in the United States and I promise myself to speak the Queen’s English only until that situation is rectified. In fact, I could have done this interview in French, but due to my commitment to the cause, I must continue to speak the Queen’s English so I can set example for everybody in the United States,” Sandow clarified.

Indeed, Damien Sandow was a character right until the end.

Damien Sandow and the rest of the Smackdown crew will be in Ottawa, at the Scotiabank Place Tuesday, September 11th, as the show starts at 7 p.m. The show will then air here in Canada on The Score, Friday night September 14th at 8 p.m.