HAMILTON, ON — World Wrestling Entertainment ventured north to Copps Coliseum in Hamilton, Ontario, on Saturday night, and the crowd was quite into the bad guys, perpetuating Canada’s reputation as “Bizarroland.” Here’s the run-down of the matches: 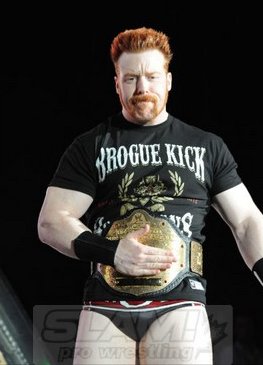 On the big screen, Smackdown GM asked fans to vote on whether the main event match between Sheamus and Alberto Del Rio should be a street fight or a 2 out of 3 falls match.

2) Heath Slater vs Roman Reigns. Slater’s opponent is an NXT guy. He won after a long match.

3) Natalya vs Alicia Fox. Pro-Natalya crowd chanted “Canada” during the match. Good match with Natalya going for the Sharp Shooter a few times. She finally clamped it on for the submission win. Her Sharp Shooter is better than the Rock’s.

4) Tyson Kidd and Justin Gabriel vs Johnny Curtis and Michael McGillicutty. Good match. After a mistake that saw Curtis accidentally hit McGillicutty, the two nearly came to blows but instead hugged it out. It looked like Tyson slipped or mistimed a moonsault attempt as he nearly landed on his head. But he was fine, and after a double-team elevated blockbuster, he and Gabriel got the win.

5) Dolph Ziggler vs Randy Orton. A good match, despite Orton being boring as always. At least in the ring with Ziggler, who many of the crowd supported, things get pretty interesting. After an exchange of rollups, Orton hit the RKO for the win.

6) Wade Barrett vs Ted DiBiase. A glorified squash saw Wade win after a short-arm running elbow to the face. Crowd was very pro-Barrett.

7) Jinder Mahal vs Ryback. A longer match than Ryback usually has, which isn’t necessarily good. Jinder gave it his all but eventually Ryback hit his walking slam for the pin. The “feed me more” chants have really caught on.

8) World Heavyweight Championship match. Alberto Del Rio vs Sheamus. Del Rio announced that he had successfully petitioned to have the Brogue Kick banned and that if Sheamus used it, Del Rio would become the champion. Odd stipulation, given that the crowd voted for a Street Fight in which there should be no rules. The story of the match was Sheamus in control, then Del Rio would run away and get the advantage by using weapons like the ring steps, a chair and a Singapore cane. After an extended beatdown, Sheamus fought back. In the end, Del Rio ran into a chair that he had propped up in the corner earlier in the match. Sheamus hit him with the Singapore cane, then hit his Irish backbreaker for the pin.

After the match, Sheamus gave his elbow pads to young kids sitting ringside and sweatily hugged some others.