Undertaker Streak DVD a must for creatures of the night

The bell tolls once, twice and a third time. The organ music grinds through the air chilling the audience to the bone just before they explode. The sounds are at their best at WrestleMania when The Deadman makes his way to the ring to add another victim to The Streak — 20-0. A remarkable feat never to be equaled in the annuals of Sports Entertainment for there will likely not be another professional wrestler so universally respected as The Undertaker. 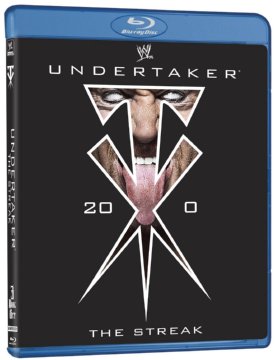 Still the question remained — would World Wrestling Entertainment’s The Undertaker: The Streak Blu-Ray/DVD be simply a resurrection that compiled all 20 of The Phenom’s WrestleMania matches or would it be more? Would we hear the deep dark voice of The Undertaker methodically taking us through the psychology of his matches, the perspectives from some of those who went down to defeat at WrestleMania, and the macabre tones of Paul Bearer as he pulled back some of the mystery behind the leader of the Ministry of Darkness? All the answers to these questions and more await.

As the crypt of secrets opens, the first disc unfurls a documentary on the legendary WrestleMania winning streak. Comparisons are made to other winning streaks throughout professional sports, but ultimately the 56-game hitting streak of Joe DiMaggio is cited as being the closest individual record. The documentary next slowly takes you all the way back to the early days of Big Evil’s career when his first victims at WrestleMania were Jimmy Snuka and Jake Roberts. The Undertaker’s trusted confident and mentor Paul Bearer even stops by to reveal his thoughts on these halcyon gone days.

Jimmy Snuka, The Big Show, Kevin Nash, Mark Henry, Ric Flair, and JJ Dillon share their feelings, but it is Triple H, Shawn Michaels, Batista, Randy Orton, and Edge who provided the most insight. Randy Orton speaks some dry wit about how his taunting of The Deadman may not have been the best idea, while Batista passionately expresses how much not only his match with The Undertaker meant to him, but stealing the show. Clearly for Edge, his match against The Phenom at WrestleMania 24 was a highlight of his career and one he looks back on fondly.

However, it is Shawn Michaels and Triple H who each may have had the most compelling matches during the long tenure of the streak. Each one speaks with a great deal of reverence and respect, but clearly there is the subtext of mixed emotions. It is particularly apparent as Michaels talks about his WrestleMania 25 and 26 matches.

Yet there is one key voice missing from the documentary and that is The Undertaker himself. Not even a whisper is heard from The Phenom about his thoughts on The Streak. It is perhaps not as strange an absence as it might appear at first. The Undertaker has always tended to let his actions speak for him in place of the spoken word. Still, imagine what might have been learned.

The remainder of the Blu-Ray/DVD collection consists of all 20 of the Undertaker’s WrestleMania’s matches. The Blu-Ray/DVD menu shows a quirky sense of humour as each opponent is listed as a victim. Out of the numerous matches some of this SLAM! Wrestling reviewer’s personal favorite matches included those against Jake Roberts, Diesel, Psycho Sid, Randy Orton, Batista, Edge, Triple H, Ric Flair, and Shawn Michaels. You can even hear while watching the Jake Roberts match a whisper in the wind saying over and over again “trust me, trust me, trust me…”

Alas, the DVD version has no extras, while the Blu-Ray version has only history packages for the WrestleMania 24, 25, 26, 27, and 28 matches, along with photos taken of The Streak over the years.

So we come to the point of whether or not to recommend WWE’s The Undertaker: The Streak Blu-Ray/DVD. Paul Bearer fixes me with a stern look. It leaves me transfixed and my fingers numb to typing. There is suddenly a chill in the air and out of nowhere a growl seems to voice in a deep tone to me that anyone who doesn’t recommend this collection will rest in peace.