The news that Tyler Reks was released from World Wrestling Entertainment on Monday was not a surprise, as he was a midcarder at best who didn’t seem destined for more. But his announced reason why is very much a surprise in this crazy wrestling world, and he has my respect and admiration for choosing the path he did.

See, in a real world far too full of absentee parenting, Reks (real name Gabriel Tuft) chose to stay home with his newborn daughter, taking a hiatus from the grind of the WWE travel schedule and live in the moment. 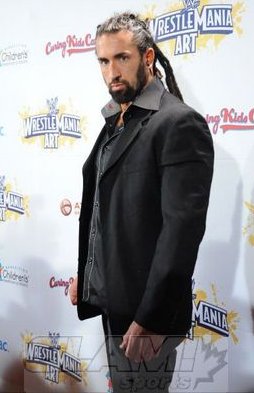 Tyler Reks at a WrestleMania 27 event. Photos by Mike Mastrandrea

Wrestling and family have always been in conflict, but back in the day with a territorial system in place, wrestlers could at least make it home a couple of days a week to spend time with their loved ones.

I remember having a nice talk with Don Leo Jonathan and his wife Rose at a Cauliflower Alley Club reunion one year, and Don Leo explaining that his kids basically treated him like a human jungle gym when he got home.

Reks’ daughter, Mia, is still too young to be climbing on Daddy, but there will come a time when she will.

In a similar vein to Jonathan, in my interview with Joe E Legend up on the site [Joe E. Legend’s global resume very impressive], he talks about his four-year-old twins and his love of life with them, and through them. His wrestling schedule works out pretty good for him to have lots of time with them.

Is there a way for wrestling, especially the travel-heavy WWE schedule, and the parenting of young children to co-exist? Probably not.

But wrestling is hardly alone in that respect.

Consider my recent interview with ex-NHL player Shawn Chambers, who played for 14 years and won two Stanley Cups. The first Cup, with New Jersey Devils in 1995, came at a high price. “That first time, the New Jersey one, that run, I’d just gotten there so I didn’t know the guys that well, and it was kind of a weird deal, because my son was born, I got traded and two weeks later my son was born in Tampa. I saw him three times. It was so much mixed emotions for me. Your whole life, you want to go play for the Stanley Cup, you want to win the Stanley Cup, but at the same time, I’d seen my newborn son three times in two and a half months.”

Like the defenseman Chambers was in hockey, Reks was a bit of a role player. He had a unique look, with his hair in dreads and all, but did not seem headed for much more than perhaps a run with Curt Hawkins as tag team champions. Though he doesn’t mention that in particular in his goodbye tweet to the WWE Universe, no doubt that factored in his decision as well. 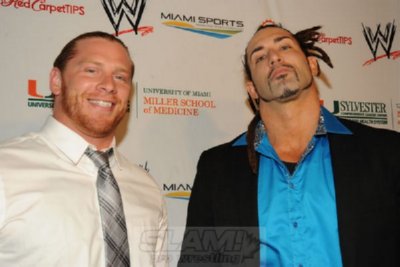 Curt Hawkins and Tyler Reks were a tag team with potential, seen here at WrestleMania 28.

Here is what Reks wrote on his Twtter account:

I just want to say thank you to WWE, Inc. for allowing me to be part of an incredible entertainment experience. On Monday, I asked for my release and the company was gracious enough to grant my request.

I realized recently that being a Superstar means sacrificing certain things, including time with my family. As a new father, my heart broke every time I had to leave to go on the road. I didn’t ever want to miss another moment with my daughter, so I made the decision to be a full time dad and hang up my boots.

I will miss everyone in the locker room tremendously as they have all become a second family to me. I want to thank my coaches and teachers that really helped me along the way: Fit Finlay, Arn Anderson, Edge, Christian, Kane, Jericho, Dr. Tom, Norman Smiley, and Billy Kidman.

I also want to thank my boys. You know who you are. Especially though, a huge thank you to Hawkins. You were like a brother to me the last year and I’ll miss you and will always love you bro. I wish you the best and thanks for understanding that I had to go be a dad. When she’s older, and able to realize what happened, I know Mia will thank you as well.

Thanks to all the dedicated fans of #ReksAndHawkins and to The #RekkingCrew. I would never have survived without you.

For anyone interested, I am currently the owner of an Internet Marketing Company that specializes in Search Engine Optimization, Pay-Per-Click, Website Design, and Reputation Management. You can find my company here:

If you need any of our services, don’t hesitate to contact me. And yes, there’s even a cartoon on the multimedia page

In short, it appears that Reks has his head screwed on right, his priorities straight, and somewhat of a post-wrestling plan in place.

My hat goes off to him.