Despite being the current TNA Knockout Champion, Miss Tessmacher still feels that she has something to prove. Specifically, that she’s not just another pretty face, and that she truly deserves to walk into this Sunday’s Hardcore Justice pay-per-view event with the belt … and to walk out with it, too.

For Tessmacher (real name Brooke Adams), competing in such a high profile match (she defends against Madison Rayne) is validation of her ability, and testament to the hard work she’s put in since joining the company’s roster.

“I have given it everything I have,” she said on a media conference call earlier this week. “I’ve put in a lot of work, and I think I’ve improved greatly in a short period of time because of it. (As a result), I think people are taking me more seriously. I think I’ve opened everyone’s eyes that I can work, I can compete. And I’ll continue to keep improving and proving everyone wrong.” 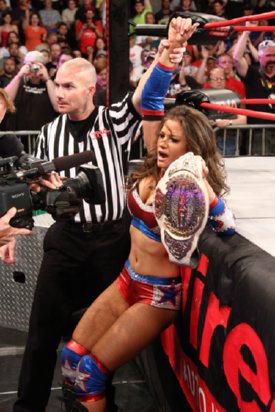 It would be easy to dismiss Adams based only on her ‘on-paper’ experience in the business. After trying out, but not making the cut for WWE’s 2006 Diva Search, Adams instead was offered a developmental contract. Shortly thereafter, she debuted for the ECW brand, as part of the Extreme Expose dance troupe. But her goal was to be a more active in-ring competitor, and she felt like the dancing role wasn’t going to get her there.

“I wasn’t fulfilled by doing a dance routine out there each week,” she said. “I’m an athlete — I would have rather been training then going out there just to dance.”

After her release, Adams took a hiatus from the business until debuting with TNA in early 2010, playing the character of Eric Bischoff’s assistant and being used primarily in vignettes and backstage storylines. It wasn’t until December 2010 that she had her first match on TV. An injury shortly thereafter took her off of TV for a few months, when she returned with a new-found focus.

This was a real-life goal for Adams, too, and she committed herself to improve her in-ring skills.

“To make an impact, I had to quit everything else I was doing to start training. Wrestling ended up being my life and the most important thing to me, and so I did what I could to get better. I trained, I watched a lot of video, I watched the matches at live shows. I had to work a lot on my cardio, do (strength training), and learn the moves, learn reversals, learn (how to) outsmart opponents.”

She credits many of the Knockouts for helping her learn and grow, and in particular, Tara, with whom she captured the Knockouts Tag Team belts.

“Tara helped me tremendously, both in the ring and out of the ring,” she said about her friend/mentor. “When she and I won the Knockouts Tag Championships, that’s when it really hit home for me. That’s when I realized that I wanted to become better. She carried me a lot, and I knew I had to go home and train and grow in order to get better.”

Other inspirations of hers were Gail Kim and Awesome Kong, whose series of matches Adams considers mandatory viewing for anyone looking to learn the craft, and WWE legend Trish Stratus, who Adams named as someone whose career she hopes to emulate.

“I also watched a lot of Trish Stratus. Trish (also) started off from being a model. She wasn’t being taken seriously originally — but she became one of the best women wrestlers ever.”

In order to be held in the same esteem someday, Adams is committed to constantly improve her game. Knowing that she’s put in the work makes the results that much more satisfying, she said.

And that hard work has definitely paid off — most notably at the Slammiversary pay-per-view where, in her home state of Texas, she became the Knockouts champion. On that night, Adams knew that her efforts had paid off. 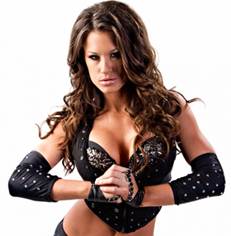 “I was so excited, there were all these emotions rolled into one,” she recalled about that night. “When I won, the crowd was just unbelievable. My tears when I got backstage were just uncontrollable. Nobody thought I could do it — you know, she’s just a model — so it was a great feeling to prove them wrong. Now, the pressure is to stay there — you can always go up, but once you’re up the only way you can go is down. It only takes one small mistake. So I am going to have to continue to keep getting better, continue to do what I’ve been doing, continue to grow.”

That growth also extends to her opportunities outside the ring. Adams’ modeling career continues to flourish, and she has also made appearances in music videos and magazines in the past couple of years. She’s also planning to take on some new ventures in the future.

“I’ve been working with a company to improve my acting skills and my speaking skills,” she said, knowing that to be successful in wrestling today, one can’t make it purely on wrestling and nothing but.

“Did you say butt?” she laughed. “Actually, I am working with a company in Dallas to come out with my own glute workout video. I do (a workout routine) that will give you killer glutes.”

Which is not to say that she’s going to put wrestling on the back side — er, back shelf. In fact, during the conference call, Adams excitedly announced that she had been asked to participate on the company’s January 2013 tour of the UK.

“I just found out about it today,” she revealed. “I’ve never been there, and I can’t wait to have that opportunity.”

Beyond those members of the media on the call, the next people to find that out are Adams’ Twitter followers. She has embraced the social media site, and tweets regularly to her fans at @BrookeIMPACT. While she enjoys communicating on Twitter, Adams is careful about what she posts on the site, lest it be misinterpreted — as has happened in the past.

“You have to watch what you say and how you say it all the time. The worst thing that happened to me happened over Twitter,” she shared. “I was called a racist because of an inside joke that I made with Gail on Twitter. The last thing I am is a racist.”

Unfortunately, in today’s world, that’s a hazard of being in the public eye. But Adams also sees a good side to it.

“It’s great that you have a voice and people hear you. There are a lot of kids that look up to you (when you are a famous person), so it’s an opportunity to be role model for them.”

With her strong work ethic, her desire to continuously improve, and a passion for the business she’s in, it’s safe to say that Adams is living up to challenge. And one that she takes seriously.

“What really matters (to me),” she concluded, “is that I come to the ring and perform to my best ability every time.”