Hardcore wrestling mixes with hardcore music this weekend in Toronto at Downsview Park as some of the stars from the glory days of ECW and many top indy names wrestle during the second annual Heavy T.O. Music Festival. 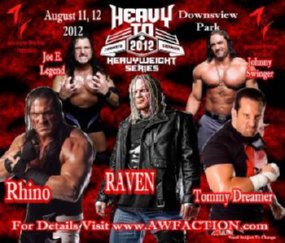 For one ticket price, music and wrestling fans get to see Raven, Tommy Dreamer, Rhino, and Johnny Swinger, as well as bands such as Slipknot, Marilyn Manson, Lamb of God, System of a Down, Deftones, Five Finger Death Punch and many, many more.

The wrestling end of things is organized by Apocalypse Wrestling Federation promoter Ron Hutchison, and there will be two hour-long shows each day. He did take into consideration the love of music when booking the talent.

Ontario veteran Kwan Chang is one of those lucky enough to be on the shows.

“Pro wrestling and heavy metal music are my two passions in life. I’ve been a wrestling fan and a metalhead since age 12,” Chang said. “Music, in general, and wrestling go well together. Music and wrestling both connect with the audience and elicit emotion, they make you feel. A good piece of music, like a good wrestling match should make the hair stand up on the back of your neck and bring out emotion. That’s what metal does to me.”

Pepper Parks, from Buffalo, NY, is another metal fan.

“I’m excited about AWF wrestling at the Heavy TO festival because I get to wear my underwear to a sweet concert!” he joked. “I hope none of my matches are scheduled to go on around the same time as the Deftones, System of a Down or Killswitch Engage. Otherwise my opponent might wanna stay warmed up with some push ups or something cause he’s gonna have to wait a few minutes.”

Like Parks, Chang is hoping his schedule works out.

“I’d love to see Manson again. He puts on a great show. I’d love to see 5 Finger Death Punch and System of a Down. Looks like a pretty good lineup,” Chang said. “I would have loved to see Disturbed on the bill. They’re my favourite band, I’ve seen them six times and I would completely mark out for them playing my entrance music ‘Violence Fetish’ as I came to the ring.”

Cherry Bomb and She Nay Nay make up the two women on the cards. Cherry Bomb is pretty excited about it all. “I think heavy metal is sort of the theme music of pro wrestling. Wrestling is intense hard hitting, exciting, and aggressive much like heavy metal,” she said, noting that she is pumped to see System of a Down play live for the first time. “I can’t speak for anyone else, but when I hear the Deftones song ‘My Own Summer’ I get the sudden urge to hop in a ring and German suplex somebody!”

Also joining the lineup is WWE and TNA veteran Joe E. Legend, a Toronto boy now based in Germany. He has been fortunate enough to see some of the heavy metal acts appear in the various European, African and Asian countries he regularly wrestles in. 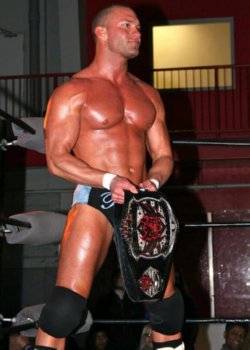 Legend said he isn’t a huge, huge fan of metal, but said he has a Slipknot CD, and is into Marilyn Manson. “I think the album, The Golden Age of Grotesque is, front to back, one of the better albums I own.”

The former “Just Joe” in WWE has given the venue and the wrestling and the crowd a little thought.

“There’s always that worry that they’re here for one product but not the other, like you’re going to show up to do the wrestling, and people are going to say, ‘Yeah, whatever. Move on. Where’s Trivium?'” he said. “You start to wonder if you’re the distraction while they’re setting up another stage. From what I’m told, no, we’re supposed to be a featured deal. And with guys like Raven, Tommy Dreamer, the whole extreme vibe and what have you, that is sort of the same audience. Many of the ECW shows, 9/10ths of the roster that came to the ring came out to some sort of metal. I’m guessing that it’s a similar fan base.”

Legend offered up a little warning to all of those on the show to consider their audience.

It’s obvious he has.

“If I go out there and try to William Regal it up, they’re going to piss on me,” Legend laughed. “But you get up there with Raven and he brings out the shopping cart of weapons, or Rhino starts breaking tables, I think that will be, I get the vibe that they’re going to want a blunt trauma stunt show more than a wrestling match.”

— with files from Doug Chambers