The transformation of an 18-year-old Maurice Vachon at the 1948 Olympic Games into a “Mad Dog” has been well-documented, but what about Harry Madison? The bare-footed boy from Verdun, Quebec, preceded Vachon by 16 years into the Olympics, and turned ring ruffian around la belle province as well.

Madison represented Canada at the 1932 Games in Los Angeles. Competing as a light heavyweight in freestyle, he lost both of his bouts — in the first round, E.R. Scarf of Australia took a fall for a win in 2 min., 26 sec.; in the second round, Madison ran into the eventual goal medal winner, Pete Mehringer of the United States, who beat him in 14 minutes 44 seconds. 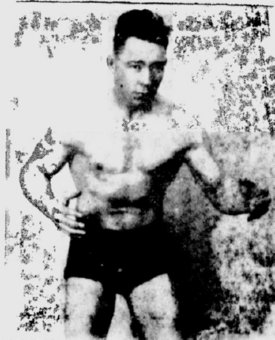 Harry Madison as a pro wrestler in 1944.

Both Mehringer and Madison would enter the pro wrestling ranks following the Olympics, though Madison would grapple off and on into the 1950s, while Mehringer’s career was brief.

And while Mehringer’s life story has been told time and again [see the SLAM! Wrestling feature Overcoming the odds: Pete Mehringer’s 1932 gold medal], Madison’s has not.

Madison was born Henry Maddison, on October 7, 1909, in Verdun, Quebec, to parents Ralph Maddison and Alice Warren. Within two years, however, he was a ward of the Lacken family in Montreal. On May 14, 1936, Maddison married Edna Harriett Porter.

The late wrestler/photographer Tony Lanza knew Madison, and said that the Olympian trained north of Montreal at the famed Camp Maupas.

“He was an amateur here in the province of Quebec. He was a tough guy. He was known for his toughness,” said Lanza in 2002. “He was a streetfighter … and I was also a streetfighter, so we didn’t get along very good in the ring when we met!”

The earliest documented matches for Madison come in Newfoundland in 1933. Though records have not been found, it is likely he did some boxing as well.

Wrestling at about 195 pounds on his 6-foot frame, Madison didn’t have the size to be a main eventer, and pretty well kept to working around Quebec for the smaller promotions or in opening matches.

According to Mad Dog Vachon, wrestling was just a part-time gig for Madison, who once broke the jaw of famed Quebec strongman Victor Delamarre. “He worked for Canadian Pacific emptying the boxcars. He wrestled on the side for years and years,” said Vachon. “He was a tough son-of-a-bitch.”

Bob “Legs” Langevin, another Quebec wrestling legend who has passed on, shared his recollections of Madison. “Harry Madison was a wrestler. He had one eye and one lung. He used to work for Canadian Pacific, the railroad company. He was a very tough wrestler, a good wrestler,” said Langevin in 2002. “He wrestled mostly in Quebec, in the province. He didn’t go outside.”

A 1934 preview in the Drummondville Spokesman newspaper gives fair warning to Madison’s opponents: “Madison is know as the roughest wrestler in the province, always trying to down his opponent by all means; using his fists, pulling his hair and especially an ace when he finds a chance to stick his fingers into his eyes. He is also considered as a dangerous man when using his double drop-kick. Should the audience shoot at Madison, he will simply invite anyone to come in the rink and try his luck.”

Don Leo Jonathan said that Madison really did like to shoot — guns that is.

“He worked for Lucien Gregoire, and I worked for [Eddie] Quinn,” Jonathan said of the two Montreal promoters.” Yet, when I was going to the States, I used to buy bullets for him, because he had an old, odd-sized moose gun that he couldn’t get bullets for. So I used to keep him in bullets.”

A hunting accident in New Brunswick cost Madison the use of one eye, a bullet having exploded, leaving lead in his eye too long.

There was a thriving junior heavyweight scene in Montreal, especially on the smaller shows. Madison wore the Montreal version of the junior heavyweight title in 1939, beating and losing to Zelis Amhara in May and June. Then in September, he took the title off of Larry Raymond, who is better known as Larry Kasaboski.

His career changed in the late 1940s, and with the advent of television, he attempted to be more colourful, and played up his bare-footed style and supposed Native-Canadian roots. 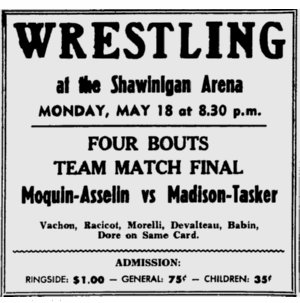 “Harry Madison, the popular bare-footed grappler, part Indian, makes his first appearance this year,” previewed the Shawinigan Standard in 1947. Two years later, the Ottawa Citizen wrote that he was “one of the few remaining barefoot wrestlers now campaigning. Madison is another of the villainous type and fireworks may be expected any time he enters a wrestling ring.”

In a interview with Scott Teal and his Whatever Happened To … ? newsletter, Frankie Cain — The Great Mephisto — recalled wrestling Madison in Northern Ontario in the early 1950s. “I was working with old Harry Madison five nights a week and we had long, hard matches. When you wrestled Harry Madison, it took you a half hour just to get out from underneath him,” said Cain. “Harry Madison was an old, cock-eyed toughie. He used to stutter, and when you couldn’t understand his high spot, he’d get mad. ‘D-d-d-d-d-drop kick.’ It’d take him five minutes to give you the spot.”

The last match for Madison came on September 13, 1954 at Exchange Stadium in Montreal, for promoter Gerry Legault.

Like his older brother, Paul “The Butcher” Vachon knew of Harry Madison before he ever got into pro wrestling. Though he didn’t know Madison when the oldtimer was still active, Vachon did meet him and shared a story.

“When Vince started promoting in Montreal, Hulk Hogan came for the first time at the Forum. I was still part of the association then, with Vince [McMahon], and I was handling some things at the Forum. I’m walking by to go around to the other side, and there’s an old guy up in the bleachers. ‘Hey, Paul!’ I hadn’t seem him for 15, 20 years,” said Vachon. “By this time, he’s in his 80s. He says, ‘It’s me, Harry Madison.’ I said, ‘What the hell you doing up there?’ ‘Well,’ he says, ‘They wouldn’t let me in the dressing room.’ I said, ‘C’mon down, for christsakes.’ I introduced him to Hulk Hogan and Hulk Hogan had heard of him. And Bruno Sammartino was there too.

“Shortly after that, I read in the newspaper, the Journal de Montreal, where he’d been arrested for disturbing the peace. Two guys, he was having a beer up north in the tavern in the little town. He’s 80 years old and they started pushing him around. He beat the s— out of both of them. Knocked them out.”