Competing for their country at the Olympic Games has been the goal of wrestlers since time out of mind.

But where do they go after they’ve reached the pinnacle of amateur competition but still want to live off the mat knowledge and skills they’ve spent a lifetime acquiring? Their options may have fluctuated in the last century-plus, but one opportunity that has always remained open for them is professional wrestling.

In his book Shooters: The Toughest Men in Professional Wresting, Jonathan Snowden reveals the rich history of genuine masters working in the business. It was Greco-Roman, freestyle, catch-as-catch-can, judo, and submission experts who once made up the back bone of professional wrestling, he writes.

And yet, despite the legitimate credentials of its early stars, Snowden makes the case that might come as a shock to the Bruno Sammartinos of the world, that Vince McMahon Jr. was not, in fact, the pioneer of gimmick-laden professional wresting. That perhaps dubious distinction has to go to William Muldoon, a muscular specimen and Greco-Roman practitioner from the 1890s whom newspapermen photographed wearing his Roman gladiator togs prior to his bouts. 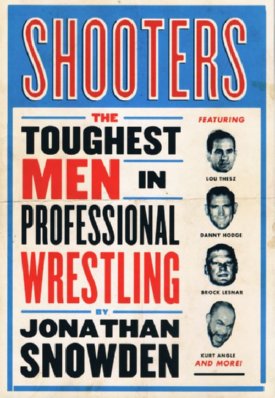 And therein lies the true secret of professional wrestling, according to Snowden. It’s not that pro wrestling once featured legitimate contests before shifting into entertainment and predetermined clashes. Rather, from Muldoon’s time onward, pro wrestling was never a truly legitimate sport. And before we lay praise or blame at Muldoon’s feet, critics before his arrival had contended matches had been scripted, with gambling the main influence in deciding who’d be going over.

Snowden’s profiles on early greats like the original strangler, Evan Lewis, Farmer Burns, George Hackenschmidt, Frank Gotch and Ed “Strangler” Lewis and many others demonstrate a great deal of investigation and understanding of a pseudo sport that would be unrecognizable next to today’s Monday Night Raw. Bouts then were far longer in length — hours in some cases — and bereft of high flying gymnastic-style action we see today. But there are similarities as well. Long before the infamous Montreal Screwjob, double crosses saw champions — even shooters — losing their belts in surprise title switches.

Some wonder whether the big-name hookers of the early 20th century would be competing as mixed martial artists if they were breaking in now. While no one can ever know for certain, Snowden, an MMA writer, reveals that sports origins are directly tied to professional wrestling, with Japanese legend Mitsuyo Maeda having had a fateful meeting with a member of the Gracie family, founders of the UFC. Maeda taught a young Carlos Gracie the finer points of a unique judo style he created that was influenced by the demands imposed on him by years spent touring the world as a pro wrestler.

Certainly by the 1960s and ’70s, many amateurs were avoiding American pro mats. While there were a handful of exceptions, like strongman Danny Hodge, who was a three-time NCAA champion, Olympic silver medalist and boxer, shooters seemed to find a home in Japan. Karl Gotch and Billy Robinson, both trained in the art of submissions in Wigan, England, and while both wrestled in America, they would play key roles in developing talent in Japan.

As the American version of professional wrestling was immersing itself deeper into spectacle, Japan kept serious about presenting the business as a real sport. Antonio Inoki got the world’s attention in his attempt to demonstrate his discipline’s dominance over others by taking on Muhammad Ali. And despite the contest being a stinker, other wrestler-versus-boxer matches would follow.

Shoot-style wrestling promotions would too, like UWF and later similar offshoots. Perhaps the most celebrated and successful of the Japanese talents that emerged from these shoot organizations was Kazushi Sakuraba. Inspired by the original Tiger Mask to get into wrestling, he’d go on to become a highly successful mixed martial artist, fittingly as the “Gracie Hunter.”

WWF briefly made attempts to introduce its own return to legit matches, starting with the ill-fated Brawl for All, the origins and failures of which are well detailed in Shooters. While a fiasco, it didn’t stop WWF from recruiting genuine fighters like Ken Shamrock and Dan Severn, as well as amateur standouts like Olympic gold medalist Kurt Angle, and collegiate champions Brock Lesnar and Bobby Lashley.

And while New York remains a gimmick, showbiz mecca, legitimate credentials continue to be highly regarded by WWE talent scouts to this day.

Shooters is a wonderfully researched and crafted book. After starting out perusing individual profiles of certain favourites, I went back to the beginning and read the book from cover to cover. Doing so illuminated the greater theme of the book and enriched the profiles that could also be read as stand alone stories. Besides being knowledgeably and well written, Shooters also shows Snowden’s own critical thinking when balancing truth from the constant companions of the fight games, worked or otherwise: legend and exaggeration.

Editor’s Note: Watch for a question and answer session with author Jonathan Snowden in the coming days.