Falls count anywhere and street fight matches can be extremely entertaining or they can degenerate into mindless repetitious brawls. Ultimately, it is the effort of the performers to tell a story in the match that determines which it will be. Thankfully the majority of the matches featured on WWE’s Falls Count Anywhere: The Greatest Street Fights and Other Out of Control Matches DVD consist of not only some hard-hitting action, but some great wrestling. 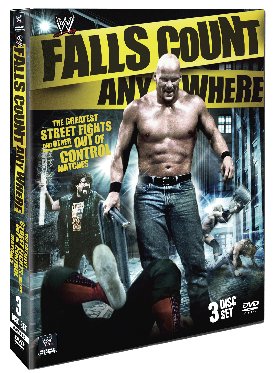 One of the great aspects of this collection is that the WWE has made a concerted effort to use their video library to include matches from WCW which throughout its history provided some pretty intense bouts. The WCW matches include a pretty violent street fight between Jimmy Valiant and Ms. Atlanta Lively versus the Midnight Express from 1985, a hard-hitting 1990 street fight between Doom’s Butch Reed and Ron Simmons, and Barry Windham and Arn Anderson, the classic falls count anywhere match between Sting and Cactus Jack, which for many years Mick Foley rated as his favorite match from his career, and a 1996 Chicago street fight pitting Booker T and Sting against The Road Warriors.

Shockingly though there is only one ECW match included, but the match chosen is a really good one — the 1998 falls count anywhere death match between Taz and Bam Bam Bigelow. For those who have never seen this match it is one of the harder hitting matches from the 1990s and has a truly stunning finish. As to why there is only one ECW match it is very possible that with the WWE starting what appears to be a series of ECW Unreleased DVDs, the first volume of which was reviewed by SLAM! Wrestling [ECW Unreleased brings back plenty of memories], WWE may have decided to save the majority of ECW matches for that series.

Of course, a huge chunk of the matches included in this collection are from the WWE Attitude Era of the late 1990s and early 2000s. However, the WWE has done a good job of not simply focusing on Steve Austin, Mick Foley, Triple and The Rock. Instead the net is cast wide to provide fans with Hardcore Championship matches between Al Snow versus Hardcore Holly which spills over into the Mississippi River and Crash Holly against The Headbangers which takes place in a fun park. While both of them at times have the tendency to descend into brawls, the wrestlers involved all give earnest efforts to keep things interesting by using the environment in which the matches are taking place to their full advantage.

The 1997 street fight between Steve Austin and Bret Hart takes place during the Canada versus U.S. storyline and is a rollicking ride which finishes up with a rather famous ambulance scene. The collection also includes the high quality 1997 falls count anywhere match between Cactus Jack and Triple H that has a hilarious spot prior to the match showing off all three of Mick Foley’s ring personas Mankind, Dude Love and Cactus Jack. The strap match between The Rock and Triple H from 1999 is also pretty good.

One of my favorite matches ended up being the 1999 Love Her or Leave Her Greenwich Street Fight putting Test versus Shane McMahon. The match really shows off McMahon’s athleticism in the ring and how good a worker Test was. Yet, above and beyond that the match is pure unadulterated fun. The Big Show versus Kane is also very entertaining as it took place during 1999 at the height of the McMahon-Helmsley storyline and has both Triple H and Stephanie McMahon changing the rules of the match throughout.

Also, the first match in the collection, an Alley Fight match from 1981 involving Pat Patterson versus Sgt. Slaughter is pretty interesting. While the match consists of a lot of brawling it additionally has some very creative spots using the ring posts. However, be warned it’s pretty bloody.

The latter portion of the collection includes matches of more recent vintage includes three street fights involving Triple H against Shawn Michaels from 2002, against Kevin Nash from 2003, and against Umaga from 2007. Surprisingly there is even a WWE Women’s Championship match placing Melina against Mickie James under falls count anywhere rules.

The host for the DVD is the Hardcore Legend Mick Foley, who provides some good insight into some of the matches along with some well-placed humor. Unfortunately there are no extras included.

The only reason I can think of to not recommend this DVD is that if you’re not a fan of Triple H, considering how many of the matches he’s a part of here, you probably will enjoy this collection quite a bit less.

Still after being thrown through a plate glass window and then being smacked into the concession stand I give the WWE full credit for putting out a high quality collection in their Falls Count Anywhere The Greatest Street Fights and Other Out of Control Matches DVD. However, due to the violent and at times bloody nature of many of the matches I wouldn’t recommend it for younger children.