Like a lot of people, no doubt, I have a stack of books that I keep meaning to get to. The wrestling pile is in a different place than the pleasure reading, and I’ve made it a policy never to take a wrestling book to bed — work has no place in my bedroom.

Instead, I got through The Midnight Express and Jim Cornette 25th Anniversary Scrapbook in the bathroom (and I know I’m not alone in using the throne room to get reading done). 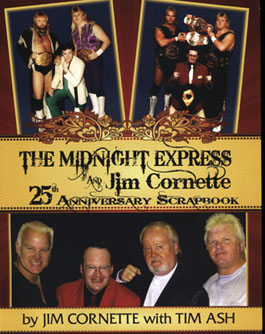 It’s been out now since 2009, and, while I might have missed the anniversary itself, I can strongly say that it is still a great read, full of fun stories and amazing pictures that more than stand the test of time.

In fact, I really wish that MORE wrestlers, managers, referees, promoters — whomever — would take the time to collect and document their careers the way Jim Cornette has.

I loved looking through the old pay stubs, programs, clippings, tickets. The oodles of results, as well as the ticket gate (when known), is interesting as well, but quickly because a glossed-over part of the scrapbook as you head from meatier section to meatier section.

The real gem of the book are the letters from fans, expressing their extreme dislike (to put it mildly) of the Midnight Express and Jim Cornette. You will be surprised at the language used by pre-teen girls for sure.

Also surprising was the number of lawsuits that the Express and Cornette faced from fans over the years, and there is probably a lot to be said about the American justice system that this Canadian gleaned from it.

The scrapbook, done in collaboration with Tim Ash, is indeed just that. You’re not going to get a ton of insight into the wild hijinks of the Express, the lines of groupies, or the recreational opportunities that were available to them. We get the backgrounds of Dennis Condrey, Bobby Eaton, Stan Lane, and Cornette, and a surprising amount about Big Bubba Rogers (Ray Traylor, later Big Bossman), who I had forgotten had played such a big role in the Express.

He collects some of his best one-liners, tells about some of the great ribs the boys did to burn off some steam, and goes off on rants about the politics in Jim Crockett Promotions, and then World Championship Wrestling, as run by Ted Turner and his minions, such as the inept Jim Herd.

Interestingly, I felt rather privileged to learn that I was privy to one of only a handful of matches between the Express and Tully Blanchard and Arn Anderson at Detroit’s Cobo Hall back in September 1988 (our two minivans of fans/readers of my Canadian Wrestling Report newsletter from Kitchener and Toronto made up a small part of the $70,000 house).

If I was threatened by a tennis racket and required to say what was missing, I’d say Stan, Bobby and Dennis. Their voices don’t come through, and at times, a differing perspective might have really helped to temper Cornette’s, well, temper.

I’m sure glad I finally cracked mine open.