‘Warts and all’ Duggan book quick to come together

Scott E. Williams, who had written books with Terry Funk and Bill Watts, and had a Chris Benoit book that disappeared into an abyss when the publisher ceased operations, thought he was done with wrestling books. The journalist-turned-lawyer had a very short list in his head of people that he might consider helping on a project. 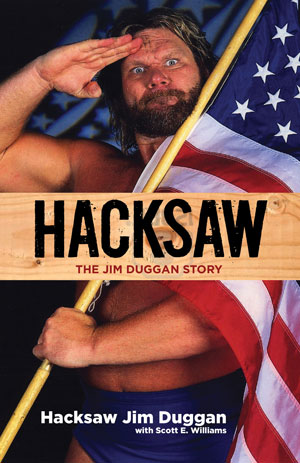 Fortunately, one of them was Hacksaw Jim Duggan.

And, fortunately for the wrestling world, they share a common friendship with Terry Funk, who played matchmaker after the 2011 WWE Hall of Fame induction ceremony, pointing Duggan in Williams’ way. The publisher had already been in touch with Duggan.

“Triumph [Books] contacted me about doing a book, which was quite a surprise. I thought they were joking at first,” Duggan told SLAM! Wrestling.

In the summer of 2011, Williams flew from his Texas home to Orlando, and traveled with Duggan from a charity event back to Hacksaw’s South Carolina home. It was a real getting to know each other process. Then Williams stayed with the Duggans for a few days.

“We just cranked on it, almost from dawn to dusk, for three days and got everything knocked out,” said Williams.

There was plenty of material, going from Duggan’s childhood until his WWE Hall of Fame induction.

Duggan said there could have been even more.

There are few stones unturned in Hacksaw: The Jim Duggan Story, which came out a couple of months ago. Duggan doesn’t shy away from the crazy lives of wrestlers, including alcohol and drugs, women, and the trials and tribulations of all the driving.

“After 33 years in wrestling, anybody’s life after nearly 59 years of living, there’s a lot of stories. We went back to my childhood and stuff. There’s always stuff that I thought of, ‘Oh, I wish I put that in!'” said Duggan. “Some of the stuff that I put in, my sisters were like, ‘You’re a little TOO honest with that, Jim.'”

It’s a “warts and all” story, said Duggan, confessing that a little has been held back for the possible paperback. “I mentioned stuff that I’m not proud of, like my drug use back in the ’80s, talking about the arrest with the [Iron] Sheik, which was a huge blow to my career. I pretty much hit all the hard subjects that I could think of.”

One of the most moving parts of the autobiography is Duggan’s recollections of a car crash in Mid-South that killed his then-girlfriend.

Williams said that telling the story really wears Duggan out, and that it is “something that still made him emotional to talk about it.” 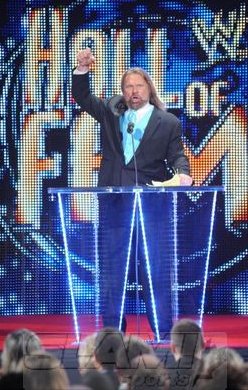 Hacksaw Duggan at the 2011 WWE Hall of Fame ceremony, when he was inducted. Photo by Mike Mastrandrea.

“It was probably the most traumatic thing that ever happened in my life. If I had one thing to change in my life, that would be it. That was a little hard going back to that, because that was something that I hadn’t shared with anybody,” said Duggan. “Actually, it became almost theraputic, I was able to discuss it a little more, maybe been able to handle it a little bit better than I have in the past.”

A unique part of Hacksaw is that his wife, Debra, is allowed to weigh in on a variety of subjects.”They have one of those relationships where she can finish his sentences and vice versa,” said Williams.

“It just seemed natural to give her point of view,” said Duggan. “That was something different that a lot of wrestling books don’t have.”

Overall, Duggan’s grounded nature and humbleness come through in the book. He is proud to be in the rare category of wrestler who has been in the same relationship for decades.

“It’s been a successful business for me. Myself, guys like Roddy Piper, Tito Santana, we’ve been with our wives 25-plus years, our kids go to school, we live in our home, pay our taxes — we’re normal members of society,” he said. “A lot of times, I don’t think people hear that side of wrestling. It’s always about drugs and rehab and death.”

Williams got mostly what he expected out of Duggan, but was surprised by one thing.

“I got the meat and potatoes, no bullshit, this is who I am kind of guy, and there were no surprises there, but I really wasn’t expecting him to be as funny as he was,” said Williams. “He’s a really funny storyteller, just his timing is fantastic.”