The boom-period of pro wrestling’s “behind-the-scenes” outpouring, on high-tide since the mid-’90s, has featured a seemingly inexhaustible need amongst fans to know everything about a business that, for the hundred or so years prior, had told them nothing.

Outside of the fan-base, though, non-observers are still stuck on the same old questions: is it fake? Staged? Do feuding wrestlers really hate each other? Issues that are irrelevant to any fan above the level of casual observer still seem to fascinate the non-viewing public.

Mark Rattelle can confirm this first-hand.

A documentarian and videographer based in Queens, NY, Rattelle followed the reliable “write what you know” path and applied his film skills to his interests, both as a fan and with a career in mind, in professional wrestling. He reveals that the response to a 10-minute long film he made on the subject, titled Independent SLAM, was not what he was expecting, leading him to expand his efforts and create a 30-minute long follow-up called The Indies; and he may not be finished yet. 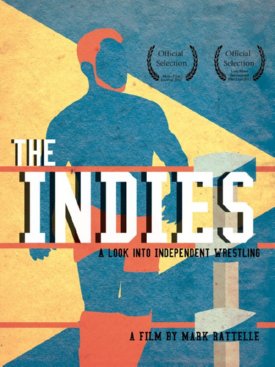 “Wrestling has pushed me towards everything I’ve ever done,” Rattelle explains in recounting the path towards the creation of the two documentaries focused on wrestling. “I remember taking communications in my undergrad because I wanted to work in the production truck of the WWF. I worked as an indie wrestler for about two years, stopped for two and a half, then worked for another three. The reason I did that was not to make it in wrestling, but to better understand the business. My thinking was that if I’m a wrestler, they’d be more likely to hire me.”

He thus found himself in a favourable position to capture the lives of wrestlers on film — thanks to his theory that he was indeed now a part of wrestling’s inner circle. “At first I tried to talk with a lot of people, and I found that the people that knew me from my time in the ring were much more open,” he recalls. “At that time I had been out for almost three years, and I did get the cold shoulder from a lot of the people who didn’t know me. I was thankful for my connections.”

One of those connections is a Massachusetts-based wrestler named Chris Gallerani — Chris Camaro between the ropes. Following Gallerani through a couple of shows on a weekend bore Independent SLAM, and it was, in Rattelle’s words, largely a chance to try out some new equipment and experiment with the creation of a documentary portrait.

It was the reactions he received from viewers, though, that really surprised him.

“I showed it to a couple of people, and most of the reactions were that they were shocked to see people do this in bingo halls,” Rattelle points out. “I took for granted that when people think of wrestling they think of the WWE and that’s it, not knowing that [independent shows] exist.”

With both the technical creation and critical reception of Independent SLAM enhancing his vision, Rattelle decided to tackle the life of an independent wrestler on a larger scale. He knew what kind of story he wanted to tell, he knew the characters he wanted to capture, and he started working on what would become The Indies.

Once again, his connections were to play a key role. One of Rattelle’s friends from his time in the ring had found his way into the WWE: Antonio Thomas, known during his TV time as one-half of the Heartthrobs. “I had originally thought that the movie would be about him and his time during and after the WWE,” Rattelle suggests. “We’re good buddies and we trained together. Right around the time I started filming, though, he got injured, and I did shoot some stuff with his physical therapy but it ended up being cut from the film.”

Thomas, for his part, wished he could have helped out more with his presence in the film but recognized that the timing just couldn’t have been worse. “Mark approached me in September of 2010,” Thomas remembers. “I just got back from Japan and was about to have surgery on my shoulder, so I wasn’t involved in the independent scene at the time. I think he wanted to get my perspective as somebody who ‘made it’ and has been around the world, but I couldn’t really help him because I wasn’t going to wrestle for about a year.”

Instead, Rattelle changed his focus and, in a sense, casted his new film. Rattelle was looking to create a documentary version of Darran Aranofsky’s The Wrestler, aiming to expand on the concept and show some different characters in the world of indie wrestling — specifically, workers from the Eastern Wrestling Alliance in Massachusetts.

“I was looking for an older guy, which turned out to be Aaron Morrison, someone who was a weekend warrior and didn’t look like a wrestler,” Rattelle begins. “I think Aaron is funny, a nice guy, very serious about what he does, and he was very open with me.

“I had always thought I would include Sarath Ton (Kid Mikaze in the ring) because he was thinking about quitting, and knowing him I knew what a big deal this was; I had known him half his life. And I also wanted someone who was on the cusp, and Frankie Arion had gone through a couple tryouts with TNA.”

These three, all of whom had worked and trained with both Rattelle and Thomas going back to 2001, became the focus for The Indies. The diverse characterization pays off from the start, as this trio showcases a mixture of enthusiasm, optimism, contentment, and resignation.

At his current stage, Arian understand that wrestling is perhaps a hobby by definition, but he is focused on his diet, training, and networking in order to turn it into a career. Morrison, by contrast, is happy to escape into the ring just for a chance to do what you can’t get away with in everyday life — smashing someone with a chair, for example.

Mikaze exists somewhere in between the two of them. He shows his picture from Pro Wrestling Illustrated in which he competed in the East Coast Wrestling Association’s Super 8 Tourney in 2009, and the question of whether he’s still chasing that kind of recognition and success, or whether his chase is over and behind him, weighs heavily on his mind.

Tyson Smith, a professor of Sociology at Brown University, is one of two academic voices that Rattelle consults in the film, where he elaborated on his interest in what motivates pro wrestlers through their hardships; investigating, in his words “what they do and how they make sense of what they do.”

Smith has interviewed a host of independent wrestlers for his own research, and states that it isn’t hard to see that they all start with big dreams but quickly realize that, for most, it isn’t going to happen.

Kid Mikaze is perhaps at that point of realization. “By 25, if nothing’s happened, I’ll stop,” he says with some conviction. “But right now I’m 27.”

The film dips into the familiar and murky territory of how many fundamental aspects of pro wrestling need to be addressed. We see a ring being built, accompanied by the obligatory assurance that it’s not soft by any means; Arian breaks down the storytelling of a match, and then opens his envelope after an event to find fifty dollars and expresses a gratitude hovering just above his expectations. 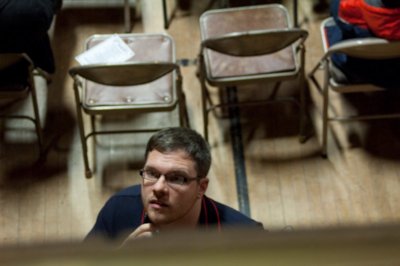 Rattelle confesses that these elements are not enough for wrestling fans because they already know these things. The film, therefore, is better aimed at non-fans — the people who inspired the making of the movie in the first place by their reaction to Independent SLAM and the mere existence of indie wrestling.

Further to that, Rattelle is certain that he has more to say about the business. “I still want to do something with this topic — not necessarily with these guys, depending on where they are, but I didn’t tell the story I wanted to tell,” he concludes. “I want to show more of the sacrifices that they go through, I wanted to get more about the try-outs. I want to take Colt Cabana’s The Wrestling Road Diaries, which was on a smaller-scale of three days, and make ‘the life of an indie wrestler’ — the whole picture.”

Thomas, while somewhat conflicted by the emergence of “behind-the-scenes” access to wrestling (“Nothing is hidden in wrestling anymore, and it sucks,” he declares. “Nobody is up on a pedestal anymore and so much of the mystique is gone; I guess it’s just the way things are.”), would still nonetheless love to help Rattelle in the future should he wish to tackle the subject again.

The three subjects of the film all had a moment at the end to discuss where they thought things were going personally: Arian is still the most focused on getting signed; Morrison is trying not to get hurt and plans to quit within a year (he said this in August of 2011), and Mikaze once again steals the philosophical spotlight in admitting how hard it is for him to walk away from his childhood dream.

Rattelle revealed that since the film’s conclusion, Mikaze’s girlfriend has had a couple of tryouts with the WWE and her involvement is probably the only thing keeping him in the business.

As for himself, Rattelle would never turn down that job in the WWE production truck, but is thrilled to be currently working on documentaries with two-time Oscar-nominated filmmaker Marshall Curry. From the sounds of things, he will never stray far from the world that, as the wrestlers in his film suggest, has a way of getting under your skin and staying there.

The Indies is playing on July 17th at 7:45 in the Long Island International Film Expo (liifilmexpo.org) in Bellmore, NY at the Bellmore Cinema. The film’s website has more information on events, the cast, and Rattelle.