HERSHEY, Pa. – Any WWE fan over the age of about 15 probably looks back on the Stone Cold Steve Austin-Vince McMahon feud fondly. It was easy for people everywhere to relate to the “evil boss” revenge fantasy, and the result was arguably the signature storyline of the Attitude Era.

Judging by the reaction of the fans at the Smackdown taping at the Giant Center on Tuesday night, the WWE is doing a pretty decent job recapturing that feeling again. 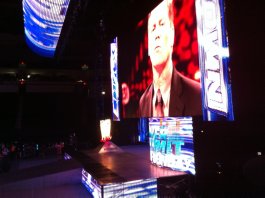 Going back to the well with John Laurinaitis as the heel authority figure may not have been the most innovative idea ever to come from the creative team, but all one has to do is listen to the crowd at a live event to hear proof that it’s working.

Let’s be clear right up front: Big Johnny is no Vince. He doesn’t possess the same larger-than-life swagger, that megalomania that made the storyline version of Mr. McMahon so great. McMahon also served as a commentator for years to create a contrast in the minds of fans once he started throwing his weight around on camera. Laurinaitis doesn’t benefit from that either.

But as fellow SLAM! Wrestling contributor Dale Plummer pointed out on Tuesday, Laurinaitis’ character is the perfect blend of evil and incompetence. He runs people over and gloats about it when he gets the chance, yet he can be backed down by someone more intimidating (see Brock Lesnar) or by a person higher up the WWE’s fictional food chain (like Triple H).

He’s more evil middle manager than CEO, making him closer to the stereotypical horrible boss most fans have in their heads. Installing him as the GM on both shows was an obvious move once his character took off, especially since there is little difference between Raw and Smackdown at this point anyway. The first time Laurinaitis appeared, the Hershey fans booed him lustily.

The other big difference between McMahon and Laurinaitis is that the former tended to feud with one wrestler at a time, while the latter is being used in multiple angles at once. The major one, of course, is with John Cena, a feud that is about to turn physical at the Over the Limit pay-per-view this Sunday. Cena’s notoriously mixed crowd reaction leans toward more cheers than boos when he’s up against Laurinaitis, something the WWE has struggled with for years.

Tuesday’s live audience also reacted strongly to replays of Laurinaitis’ firing of The Big Show, a development that is rife with possibilities. And without spoiling anything major from Friday’s broadcast, WWE Champion CM Punk came out to engage in some verbal sparring with Laurinaitis. The writing team has effectively set the GM up to clash with anyone it wants to push as a face. With a dearth of strong heels on the roster right now (Daniel Bryan is blossoming, but his “Yes! Yes! Yes!” bit is making him too popular to stay a bad guy for long), that approach is paying dividends.

Punk, Randy Orton and Sheamus all got big cheers on Tuesday, and the younger fans in attendance reacted strongly to Kane too. Yet if the definition of being over is strictly how loud people get the first time you show your face, Laurinaitis probably topped all of them. He’s not likable — and really, that’s the point — but the charisma-challenged man with the gravelly voice is working exactly the way the WWE needs him to at the moment.

“Best of luck with your future endeavors” doesn’t roll off the tongue as easily as “You’re fired,” but it may end up remembered almost as fondly once it has run its course.