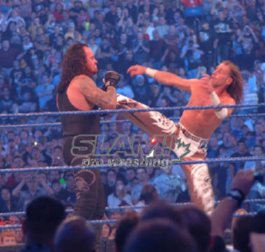 When The Undertaker told Shawn Michaels “It’s hell, trying to get into heaven,” Michaels responded by challenging The Phenom to a match at WrestleMania 25. Veteran Announcer Jim Ross recalls that all hell did indeed break loose.

“Announcers can only embellish what they see and can’t make something great with smoke and mirrors,” Ross said. “The in-ring talents lay the ground work, but the broadcasters should be able to make a good match better and a great match a classic.”

This was actually the last WrestleMania that Ross called, as part of the main roster. Looking back, he has no regrets, and really considers the match between Shawn Michaels and The Undertaker as a highlight of his last few years with the company; maybe even a highlight of his career.

“I was ecstatic. It was very important for me to personally be a part of this event and specifically this historic bout at the 25th WrestleMania,” Ross said. “My respect for both Undertaker and Shawn Michaels is genuine and goes back many, many years. It wasn’t about me. It was about being able to contribute to what two men that I professionally admire, were doing on the biggest stage of their lives.”

This was the first time that Michaels squared off against The Undertaker at WrestleMania, but it was nothing new to him, as he was a huge part of several ‘firsts.’ Michaels participated in the first WrestleMania ladder match, the first WWE Ironman Match, the first Elimination Chamber and the first Hell in a Cell match; he won three out of those four.

Before Michaels made a name for himself as ‘The showstopper, the headliner and the main event,’ his early years in the business were spent as part of a tag team with Marty Janetty; a combination known as The Midnight Rockers in the AWA.

The Midnight Rockers had a heated feud with Buddy Rose and Doug Somers, before bringing their gimmick to the World Wrestling Federation, and dropping the word ‘Midnight’ from the team name.

The Rockers were quite a pleasure to watch, as they showcased some of their skills in the aerial department, bringing everyone to their feet.

But as the popular saying goes ‘All good things must come to an end.’ The Rockers officially split up in early 1992, when Michaels turned on Janetty and launched him through the Barber Shop window; a segment that is still referenced today.

After the break-up, it seemed like a rocket was strapped to Michaels’ back. He was managed by Sensational Sherri and captured the Intercontinental Championship later that year. Once Michaels and Sherri parted ways, Michaels introduced Kevin Nash as his bodyguard Diesel.

He and Diesel were an almost unstoppable force, as they won the Tag Team Championships in the summer of 1994. Unfortunately for Michaels, he was never great at keeping friends, and actually challenged Diesel for the WWE Championship at the following year’s WrestleMania. Of course, this was after Michaels had become the first man in history to enter the Royal Rumble match as number one and win it.

Michaels came up short in the WrestleMania match, but would later recapture the Intercontinental Championship from Jeff Jarrett that summer.

The following year, Michaels’ childhood dream was realized as he defeated Bret Hart for the WWE Championship in the 60-minute Ironman Match, which Michaels actually won in overtime.

In early 1998, Michaels was the reigning WWE Champion, but was taken out of action due to an injury, actually caused by his WrestleMania 25 opponent The Undertaker. He was able to fight through the pain long enough though, to be able to drop the title to Stone Cold Steve Austin at WrestleMania 14.

At this point, Michaels feared that he would never wrestle again, but four years later, he returned triumphantly to square off with his long-time friend Triple H, and won the World Heavyweight Championship shortly afterwards.

Michaels will also forever be known as the man who started D-Generation X, the man who lost his smile, and the man who retired Ric Flair.

It seemed like Michaels had done it all in the business, except for one thing: ending The Undertaker’s WrestleMania streak.

Michaels gave it everything he had, but quickly realized why his moves are called ‘high risk,’ as he attempted a moonsault, but was caught in the waiting arms of The Deadman and driven into the mat with the Tombstone, moving Taker up to 17-0.

Michaels did not take that loss well. He ended up taking a few months off, immediately following WrestleMania, only to return that summer to reform D-X with Triple H. It was fun while it lasted, but ultimately, Michaels could not get over the loss to Taker at WrestleMania, and he needed another opportunity at WrestleMania 26.

Taker refused at first, but Michaels wasn’t exactly a one-hit wonder. He even went as far as costing The Undertaker the World Heavyweight Championship.

With that action, Undertaker agreed to the match on the condition that Michaels put his career on the line. Without blinking an eye, Michaels accepted the terms and was ready to make history again.

“I thought that they would have a heck of a time topping the previous year’s classic,” Ross said. “But they succeeded. It was an amazing bout to watch as a fan.”

Most agree that sequels are not as good as the original, but this was as close as it gets to duplicating an outstanding performance the previous year. 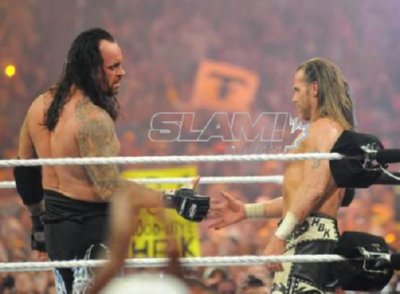 Both guys clearly only got better with age and the WWE had so much faith that this match would steal the show that it was placed in the main event slot, which is rare, since it wasn’t for any title. But the stakes were far too important to be ignored.

Michaels pushed The Undertaker to his absolute limit, but it wasn’t enough, as Taker always kicks it into his highest gear at WrestleMania, and was able to put Michaels away with a series of Tombstones.

Michaels may have lost the match and been forced into retirement, but he did expose a more human side of The Undertaker, who was almost showing signs of compassion in the final stages of the match. But a thunderous slap from Michaels forced The Deadman to keep his focus on the task at hand and move his undefeated streak to 18-0.

“I’ve generally been able to naturally allow the fan in me to take over and to do my job as a broadcasting professional,” Ross said. “I’ve become emotional during many matches, but have been able to suppress those emotions, as to not distract from what the athletes are doing. Sometimes, those emotions are manifested in the presentation.”