The Streak: Batista bows down 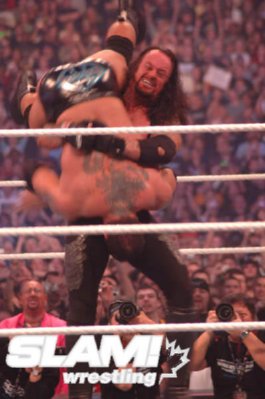 Dave Batista is one “Animal” who would not be classified as man’s best friend. At WrestleMania 23, The Undertaker made sure there was an open grave for him at the pet cemetery.

“There’s no one on his (Undertaker’s) level. He’s our president,” Batista told SI.com in a 2007 interview. “He’s our locker room general. He’s also been the locker room judge for years in ‘Wrestler’s Court,’ an unofficial court, where older wrestlers police others and keep everyone in line. The catch is most of them can be bought off, especially the judge. He (Undertaker) will settle any dispute, but he’ll also always let it be known that he can be bribed.”

The WWE has a history of pushing wrestlers with impressive physiques, so it was only a matter of time before the six-foot-five, 317 pound (at the time) Batista would be included in the main event mix.

By the time the match with The Undertaker came around, Batista already had years of experience being at the top of the card. In fact, he was the defending World Heavyweight Champion going into the WrestleMania match. And surely The Undertaker scans through the experience summaries on his opponents’ resumes.

Although Batista entered the wrestling business in his early 30s, which is fairly late by wrestling standards, he clearly wasn’t looking to waste any time. He started training at WWE’s developmental territory Ohio Valley Wrestling, using the name Leviathan.

And as quickly as he could say his own name (actually spelled Bautista), Batista was then brought up to the main roster in the spring of 2002, as Reverend Devon’s henchman.

The gimmick didn’t really work out, and Batista took some time off to be repackaged. He returned later that year, under the tutelage of Ric Flair, and shortly afterwards, he joined forces with Flair, Triple H and Randy Orton, to form the group Evolution.

Batista was the muscleman in the group, who oftentimes served as backup. But sooner rather than later, he proved that he was more than just a sidekick.

After leaving Evolution on his own terms, he defeated his former mentor Triple H to win his first World Heavyweight Championship at WrestleMania 21.

Following that win, Batista took on all challengers, but was taken out of action by Mark Henry, due to a legitimate injury that he was working through. He was forced to relinquish the title as a result.

Injuries may have prevented Batista from reaching his full potential, but they could not stop him from climbing to the top of the mountain.

Batista returned triumphantly in the summer of 2006 and not only got his revenge on Henry, but also recaptured the World Title from the new champion King Booker.

In 2007, Batista was on top of the world once again. But at WrestleMania, he was faced with another challenge; that being a match with The Undertaker.

“There’s an energy and a feel about WrestleMania — it’s such a special event and I can’t really explain why,” Batista told the Detroit News in a 2007 interview. “But there’s definitely an electricity about it. This will be my second main event in five years with the company — I can’t even put into words how good it feels. It’s like a dream come true.”

That dream may have become a nightmare for Batista, who became The Undertaker’s 15th WrestleMania victim. Regardless, Batista still considers it a career highlight.

“It’s one of those things that is hard to put your finger on, but there definitely is something there,” Batista told the Baltimore Sun in a 2007 interview. “When we get in the ring together, I think it’s magic. I think we always have the same goal, and that’s just to give a heck of a competitive match. It’s not easy with us both being babyfaces, but as long as we’re competitive and we’re physical and give the crowd their money’s worth and take them on a ride, then it’s going to work. I think people have really been sucked into this rivalry, myself included. It’s like a dream come true. Him (Undertaker) being such a large man and so athletic. He’s the perfect opponent for me.”