No. 24 – Bret Hart has WrestleMania to remember 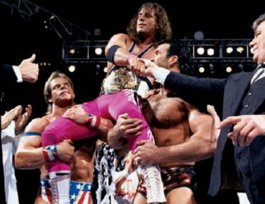 Bret Hart is hoisted on the shoulders of the other babyfaces after his win at WrestleMania X.

WrestleMania X has to be one of the crowning achievements of Bret Hart’s illustrious career.

After being declared the co-winner of the 1994 Royal Rumble with Lex Luger, both men would receive WWF Championship matches at WrestleMania. Hart earned the right to have the second match, in the main event, but would end up pulling double duty, wrestling his brother Owen Hart in the opener.

That match is widely considering to be on of the top matches in WrestleMania history and saw Owen upset Bret. The two would battle back-and-forth, each locking in the Sharpshooter at points, but it was Owen who would block Bret’s victory roll attempt out of the corner, sit down on it and get the three count in a tremendous 20-minute match.

A few hours later, Hart came back out to challenge the gigantic 586-pound Yokozuna, victorious by disqualification over Luger earlier, for the world championship.

With Rowdy Roddy Piper as the special guest referee, Hart’s leg was still hurt from his match with Owen and Yokozuna jumped on him right as he entered the ring. Yokozuna would dominate the match until Hart moved out of the way of Yokozuna’s corner back splash. Hart would hit a bulldog and start to fire up. Yokozuna, though, would catch Hart in a belly-to-belly throw and bring him over to the corner for the deadly Bonzai Drop, but he lost his balance on the rope, falling backward (with Hart moving), allowing Hart to cover and get the three count.

Hart would eventually rise as the good guy locker room would empty to congratulate him in the ring.

Why it was important: This would be Hart’s second title reign and would be sweet revenge after being cheated out of the title by Yokozuna and Mr. Fuji at WrestleMania IX. The win here cemented Hart as one of the top stars of the new World Wrestling Federation.

The moment: Brock Lesnar tries to cap WrestleMania with a bang

Brock Lesnar was the youngest WWE Champion in history but had his first title run unceremoniously ended when his manager Paul Heyman turned on him. After winning the 2003 Royal Rumble, Lesnar would go on to face Kurt Angle in a highly-anticipated match in the main event of a loaded WrestleMania XIX.

The two went back-and-forth in an epic match (even though Angle had a severely injured neck at the time). Both men would hit their big moves but Lesnar pulled ahead with not one, but two F5’s to the champion. That wasn’t enough, though. Lesnar sat up in the corner with a smile on his face, got to his feet and went to the outside where he climbed the ropes to the top turnbuckle. As he climbed, the buzz in the crowd started increasing. He steadied himself and came off the top with a Shooting Star Press but ended up coming up short on the move, jamming his head between Angle and the canvas.

Angle quickly moved to cover Lesnar, who kicked out at two. Angle would pull Lesnar up, but Lesnar kicked him in the gut and gave him another F5, draping one arm over him for the cover and the championship win.

Why it was important: A few inches in the other direction and Lesnar might’ve had his career ended or severely altered. All told, he suffered a concussion and was able to return to defend his title at the next pay-per-view. It could’ve been much, much worse.

The moment: Hogan fights for the right of every man, wins title

Hulk Hogan was just an innocent bystander. After Bret Hart was robbed of the WWF Championship in the main event of WrestleMania IX via Mr. Fuji’s dreaded salt, Hogan came down to contest the decision and console the “Hitman” and help him to the back. But then, Fuji got on the mic and challenged Hogan to come face Yokozuna for the championship right then.

At Hart’s insistence, Hogan returned to the ring and it was on, as Yokozuna grabbed Hogan and held him for another salt attack from Fuji. This time, it backfired as Hogan ducked and the salt hit Yokozuna. Hogan hit a clothesline and then the famous leg drop, pinning Yokozuna and winning his fifth WWF championship.

Why it was important: This would be Hogan’s last title reign before leaving for World Championship Wrestling and his last WWF title reign for nine years.