Preparing for his World title defence in Montreal at the Bell Centre on Friday, Daniel Bryan took the time to talk about his World title reign, his days in Ring of Honor, his relationship with mentor William Regal and what he thinks about facing Sheamus at Wrestlemania for a second straight year. 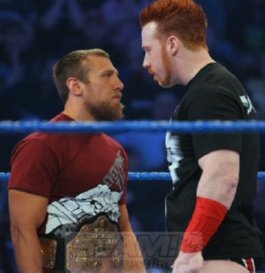 Looking back at the start of his reign, on December 18, 2011, Bryan confessed that he wasn’t aware he was going to win the World title even on the day of the show. In fact, he believed he would be the first one to not cash his Money in the Bank title shot successfully.

“I had some experience with NXT as they were not always telling us what was happening to set up a legitimate reaction,” told Bryan to the RDS Website. “As you know, I wasn’t booked on the Survivor Series pay-per-view, and the only reason I was in Baltimore [for the TLC PPV] was for an autograph signing.”

Instead, he became the 10th Money in the Bank winner to cash in, by defeating The Big Show, who had only just defeated Mark Henry himself.

“Right before it happened, they told me to stay dressed and when it was time, to come,” he recalled.

Before being World Heavyweight champion and signing with WWE, Bryan wrestled for many independent promotions, including Ring of Honor, where he made a name for himself wrestling in the very first main-event of the company’s first show. He was ROH World champion in 2005 and 2006.

“ROH was so important for me. I felt like I was the main guy ever since I won the title. They gave me the opportunity to prove that I could draw. Me and Takeshi Morishima drew 2,500 people in New York City,” he reminisced.

In ROH, he used his real name of Bryan Danielson.

Was there any discussion of using that name with WWE?

“WWE never gave me this option. They gave me a list of ten names and it’s William Regal who came up with that one,” said Bryan.

Regal not only helped pick Bryan’s new name but has also been a great influence on his career.

Bryan still talks to The Heartbreak Kid every now and then.

“We’re going to chat, but not about wrestling,” explained Bryan. “Sometimes, he gives me a suggestion on something but not to the level of Regal who constantly gives me his advice because he’s on the road with us all the time.”

Two weeks after the show in Montreal, Bryan will defend his World title against Sheamus in his first “real” Wrestlemania match.

Bryan was scheduled to be on the show last year — against Sheamus — but because of a last-minute decision, his match was rescheduled to the pre-show.

It is ironic that a year later, he will face the same opponent as 12 months ago.

Was it a way for WWE to make it up to them?

“I don’t think so. These things just happen. I’m just happy to have this opportunity,” he said. “I’m in a much better position than last year and I’m excited to be part of what could be the greatest Wrestlemania of all-time.”

On April 1st, whether you know him as Daniel Bryan or Bryan Danielson, the World Heavyweight champion will be part of a historic event in Miami and will surely come down the aisle with his new catchphrase: “Yes, Yes, Yes!”

But first, there’s the bout against The Big Show and Randy Orton in Montreal on Friday.

Bryan has been testing a new catchphrase for that occasion.