Dick Woehrle, who died Monday afternoon of colon cancer at 81, was easily one of the most recognizable wrestling referees in history. In a time when the state athletic commission generally assigned the arbiter in the ring, he worked in the Northeast, in some of the biggest markets, for the biggest promotions, and with the biggest names.

“In the ’60s and ’70s, he handled every big match that was ever in New York, from Bruno to Pedro to Billy Graham, whenever there was a title match or an important match, Vince McMahon Sr. always had him in there. That tells you that he was the go-to guy,” said veteran Ray Apollo.

Licensed in states such as Pennsylvania, New York, Delaware, New Jersey, District of Columbia and Maryland, Woehrle worked some big-league arenas. “When Vince Sr. had a big, important match, it was Dick, especially the Spectrum and the Baltimore Civic Center and the Cap Center in Washington,” said his friend of 40 years, Davey O’Hannon. 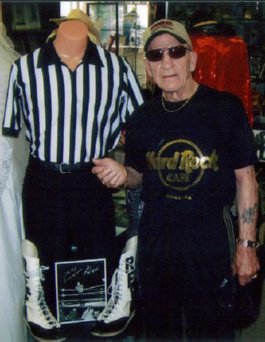 Dick Woerhle stands beside a display in his honour at the Pro Wrestling Hall of Fame in Amsterdam, NY.

Born April 1, 1930, Woehrle was a boxer growing up, which led him into training boxers and refereeing boxing.

There came the time that Vince McMahon didn’t have a referee and called the commission, which sent over Woehrle.

“What the hell am I supposed to do here? I don’t know anything about this wrestling stuff. I’m a boxing referee,” Woehrle said.

“Well, they sent you, so you’ve got to get in there and referee,” replied McMahon.

Impressed, McMahon Sr. asked for Woehrle on a regular basis.

“I think a lot of the no-nonsense part came from breaking up boxers and pushing people around,” said Apollo. “Dick was always in great shape, he was always fit, he was always wiry and strong. He was a middleweight.”

Though he might have been assigned by the commissions, Woehrle was no stranger to taking bumps for the good of the match.

“I took so many bumps. I’ve been at least into the third row, going over the top,” Woehrle joked at the 2011 Pro Wrestling Hall of Fame induction weekend in Amsterdam, NY.

He told the story of once getting knocked over the top rope by Ivan Putski. “My neck, I thought I broke it. They were trying to drag me back into the dressing room. I said, ‘Wait a minute, I’ve got to finish this match.’ I’m seeing stars every colour in the book and I’m hanging onto the drape of the ring. All of a sudden I hear BOOM! And I reached up with my hands — smack, smack, smack — that was the end of the match, and I made it.”

Baltimore was one of those cities that saw WWF and WCW action, so Woehrle worked a lot of matches with “Nature Boy” Ric Flair.

“Ric Flair would come over to me, and he’d talk to me and he’d say, ‘Dick, here’s what I’m going to do. I’m going to nail this guy left and right in the corner. You keep breaking me up. Then I’m going to hit you with a right hand, then you go underneath me and you nail me with three or four shots — you used to be a boxer.'” recalled Woehrle. “I said, ‘Geez, I can’t do that. I’ll get fired.’ ‘Nah, nah, no, don’t worry about it.’ So he’s beating the hell out of this guy in the corner and I’m breaking him up, pushing him back. Finally, he throws a right hand, and I mean, it’s coming. I hit him with a left-right, and he flies over the top rope, right out into the crowd. I said to myself, ‘This guy is crazy.’ He goes over to the timekeeper, grabs the hammer and he’s coming in after me. Meanwhile, the other wrestler comes over and stops it. But that’s how Ric Flair was. He could make you look like a million bucks.”

Woehrle said his philosophy was simple when he was asked to get involved: “I always told the guys, ‘Look it, when you hit me, hit me, I don’t want to fake anything like I’m flying this way and make myself look stupid. Hit me.'”

“Pretty Boy” Larry Sharpe worked with Woehrle often. “He was a great referee. He liked to be the babyface — he didn’t want any heat on himself,” explained Sharpe. “He was very helpful to new guys that were coming in

the business, he would help them out, give them some suggestions while the match was going on.”

Given his experience, Woehrle promoted some shows, including small shows around the northeast and a few in the Caribbean, and helped share his experience with young wrestlers, such as Reckless Youth (Tom Carter) and John Rambo.

Like the wrestlers he officiated, Woehrle faced numerous physical issues once his career ended, including shoulder surgery, from hitting the mat so many times, and bum knees from the boxing-like dancing on his feet — “I’m a guy that likes to keep moving.”

For the last number of years, Woehrle was a regular at fan fests around the northeast, happily chatting with fans who remembered him, and seeing his old friends.

“We had such camaraderie. We might not see each other for 10 years, but it’s just like we left each other yesterday,” Woehrle said in May 2011.

With a Remco referee figure to prove his worth, Woehrle always felt like he was somebody, said Sharpe, launching into a story that Dick hated him sharing.

Sharpe was hired to present a wrestling show for a Pathmark supermarket event, where all the executives and bigwigs were there. In the battle royal, Sharpe’s Monster Factory students wore shirts representing Pathmark competitors, like Piggly Wiggly, and it ended with James Karen, who played Mr. Pathmark in the ads, cleaning house and winning the match, which had Woehrle as the referee.

“I know you. I think I used to train you for boxing in Scranton. I never forget a face,” Woehrle said.

“No, I never boxed before. You must have me mixed up with somebody else,” said the stranger.

Woehrle persisted, and the man said, “Well, you are you?”

The regulars around the northeast, like O’Hannon, Johnny Rodz, Manny Soto and Pete Sanchez kept in touch with Woehrle, and knew the end was near.

The initial prognosis for Woehrle’s colon cancer — actually just outside his colon — was good and the chemotherapy seemed to work. A second occurrence resulted in a different version of chemo, which left him “sick as could be,” said O’Hannon. The doctors gave Woehrle the option of continuing with treatment, for maybe another six months of life but being really sick, or stopping and letting nature take its course. He chose the latter option, dropping to under 100 pounds, and for the last week, hospice care was provided at his New Jersey home.

O’Hannon said his friend had no regrets. “He said to me, ‘I had a really good life. I got to spend it in the business. I met all kinds of people and went to different places. No

Though the third man in the ring is often overlooked, they were key to the show, concluded O’Hannon. “We used to have a saying that it takes three to tango, and you never really knew what a good referee was until you had a stinker. Dick made it so easy every night.”

Greg Oliver got the chance to meet Dick Woehrle on numerous occasions at the Pro Wrestling Hall of Fame induction weekends. R.I.P., Dick. He can be emailed at [email protected].