The Streak: Sid drops the belt

EDITOR’S NOTE: SlamWrestling.net’s Blaine van der Griend has been going through The Undertaker’s undefeated streak at WrestleMania, one match at a time. 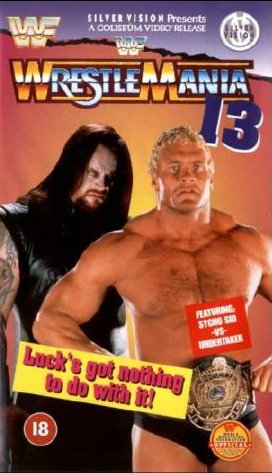 The Coliseum Video release of WrestleMania 13.

“Psycho” Sid Vicious is certainly no stranger to WrestleMania main events. In fact his last WrestleMania appearance was quite memorable, as he not only had to worry about losing his World Wrestling Federation Championship, but also had to concern himself with ending The Undertaker’s undefeated streak, which was no easy task. But it seemed like nothing bothered him.

Many will recall that the WrestleMania 13 card changed directions several times before it was finalized. Actually the card was only finalized about a month before the event. Shawn Michaels, who was originally supposed to work the main event against Bret Hart, was out with a knee injury, just after he delivered the infamous “lost my smile” promo and relinquished the title.

Hart then won the title at the following pay-per-view in a four-way battle royal, only to drop the belt to Sid the next night on Raw, after interference by “Stone Cold” Steve Austin. It was then decided that Hart would work with Austin at the pay-per-view, while Sid would main event against The Undertaker. And Sid had no problem with this, as like many others, he had a tremendous amount of respect for Taker.

“Mark was a regular and easy going guy,” Sid said. “He was a nice guy.”

Prior to his WWF stint, Sid spent the early part of his career in Japan and at one point, he competed under a mask as Lord Humongous, but the gimmick never really took off. His wrestling name derives from the famous rock star Sid Vicious of Sex Pistols fame.

After being signed by World Championship Wrestling in 1989, Sid formed a tag team with Dan Spivey, called The Skyscrapers, who were managed by current Smackdown General Manager Teddy Long.

Sid was removed from the team due to injury, and was coincidentally replaced by his WrestleMania 13 opponent The Undertaker, who was then known as “Mean” Mark Callous.

One of the high points in Sid’s career was being a member of The Four Horsemen, which was again short-lived. But Sid was the powerhouse of the stable.

Sid first came to the WWE in 1991 (then known as Sid Justice) and was immediately pushed to the top of the heap, as he main evented his first WrestleMania the following year against Hulk Hogan.

His next run in WCW was very forgettable. But he was positioned for a run with the title, until a violent altercation with Arn Anderson changed those plans.

Sid spent a brief period in the mid ’90s, working in the USWA, but would soon return to the WWE in 1995 as Shawn Michaels’ bodyguard. He turned on Michaels shortly afterwards and then began feuding with the WWE’s top star Diesel (Kevin Nash).

After a brief absence, Sid returned to the company in the summer of 1996, and almost immediately won the title from Michaels, only to drop it back to the Heartbreak Kid two months later. However, because of Michaels’ injury, Sid was able to win the belt back just in time for WrestleMania.

The finish of the WrestleMania match came when Bret Hart provided a distraction, allowing The Undertaker to take full advantage with the Tombstone and pick up his sixth WrestleMania victory.

After taking some time to reflect on the match, Sid would not have had it any other way and he wishes The Undertaker nothing but the best.

“I think it’s great that the guy has been able to stay healthy for a long time,” Sid said.