The Streak: Nash lays down on way out 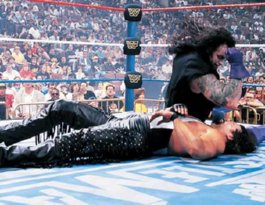 The Undertaker drops an elbow on Diesel.

A new generation was taking over the World Wrestling Federation in 1996. And The Undertaker made sure that everyone knew who was running the show, including the company’s top dog at the time, Diesel.

In the early part of his career, Kevin Nash may have given Kevin Costner a run for his money, due to the fact that Nash played the bodyguard role for most it.

Nash’s forgotten WCW gimmicks such as Oz and Vinnie Vegas have been forgotten for a reason. Older fans may also remember Nash for playing the Super Shredder in the sequel to the Teenage Mutant Ninja Turtles movie.

It wasn’t until the mid ’90s when Nash finally found his niche with Diesel. He was originally brought into the WWE as Shawn Michaels’ bodyguard, but following a standout performance in the 1994 Royal Rumble match, where he eliminated seven men by himself, Nash soon had his own run of success.

He is one of only a handful of men to capture the WWE Tag Team, Intercontinental and Heavyweight Championships all within his first year with the company.

Nash formed a bond with some of his friends in the locker room and stood by each of them, no matter what the circumstances. Of course that group is now famously known as ‘The Kliq.’

Following one of the most successful years in Kevin Nash’s career, he decided to pursue competition elsewhere. Prior to his WrestleMania 12 match with The Undertaker, Nash told WWE boss Vince McMahon that he wanted to leave for rival competitor WCW.

So with that, Nash put on one last big performance for the company that made him a star.

At least Nash can now claim that he’s part of yet another piece of history — being an Undertaker WrestleMania opponent.

In 2005, Nash did a lengthy interview with the Pro Wrestling Torch where he talked about the match, tied into his decision to leave.

“Because Vince told me when I told him I was leaving, he wanted me to put over Mark (Undertaker) at WrestleMania. I said, ‘A pleasure. I will put Mark over 100 days in a row.’ I have nothing but respect and love for Mark. He’s a man’s man. I saw him work with f—in’ broken ribs in a flack vest with a face mask on and a broken orbital bone. He is a stud.”