Femmes Fatales bringing all that Jazz to Montreal

Usually the Festival International de Jazz de Montréal takes place in late June into early July. However, the Femmes Fatales promotion is moving up the schedule a bit this weekend, with women’s wrestling veteran Jazz coming to town to battle LuFisto.

On the phone before yet another gig, Jazz — real name Carlene Moore-Begnaud — is downright excited for the trip north from Louisiana to work for the Femmes Fatales women’s promotion. 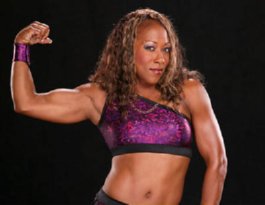 Jazz in her WWE heyday.

“I’ve heard a lot of great things about [Femmes Fatales],” Jazz told SLAM! Wrestling. “A lot of my friends I know have worked with that promotion and they have nothing but good things to say about it. I’m more than excited to be a part of it this coming weekend.”

The phone continues to ring for Jazz, who has contemplated stepping away from the sport now that she is 38 years old, with two young children.

“I’ve heard so many good things about them and I’ve been trying to get there for the last year, and finally my time has come. I’m ready to come up there and show Montreal what I have to offer,” she said.

LuFisto (Gen Goulet) is not only one of the top women on the independent scene today, but she is a lot of the strength behind Femmes Fatales as well. This will be the first time Jazz and LuFisto have danced. “I’ve had a few girls tell me about her and they put her over big time. I am really anxious to get out there and have fun,” she said.

“Although I was a heel, fans hated me as far as that, but they respected for me for what I did in the ring. They respected me for my work. That’s all I can ask for,” Jazz said.

She has a lot of respect for the women toiling on the indy circuit, and lists Mercedes Martinez, Portia Perez and Rain as three who have not gotten the break in one of the big companies yet, though “the list can go on and on.”

“There are so many girls out there now that are so good. There’s no reason they shouldn’t be on TV, know what I mean?” lamented Jazz. “There’s some awesome female workers out here and they just haven’t gotten the opportunity to showcase it on the mainstream. But they’re doing their thing out here on the indies, let me tell you, they are representing.”

Given that Jazz and her husband Rodney Mack run a wrestling school and a promotion that raises money for at-risk youth, she is more than aware of what WWE and TNA are looking for as far as the women go.

“We try to teach them that if you look good, don’t focus on letting it be your main thing, looking good. You stay in the gym and you stay fit, your body is going to look good,” she said. “Once you go through that curtain, they see how you look. But then you’ve got to showcase your talent in the ring and that’s the main thing. They want to see you get in that ring and brawl to the wall.”

“Your ring work is what’s going to get you booked again.”

She and Mack take the teaching seriously, and given that they were both trained by Junkyard Dog and then Rod Price, they are on the same page.

“We try to pass along the knowledge that we have. That’s one thing that me and Rodney really apply ourselves to doing, is sharing the knowledge. A lot of people, they tend to be greedy and not want to teach people. But in order to keep this business alive and keep it the way we was brought into it, you have to share your knowledge. You can’t be greedy with it and not share it. We thrive on sharing and teaching them the right way of the business and being in the ring as a professional wrestler.”

As for their youngest students, their four-year-old twins, well, it’s next to impossible to keep them away.

“We have a ring set up, we have a school, and they’re out there doing rolls and trying to bump themselves,” Jazz said, admitting that while she may not really want them to follow their parents into pro wrestling it might be out of her hands. “I think it’s kind of in their blood. I don’t think there’s nothing I can do about it.”

On top of the wrestling, teaching and promoting — and mothering — Jazz is enroled in a physical therapy program, with the goal of having something to do after her in-ring work is done.

But for now, it’s hard to imagine living without the rush of performing, she confessed.

“I keep saying I’m ready to give it up, but it’s hard, it’s really hard to hang the boots up. I see why Terry Funk had 12 retirements,” she laughed. “It’s the whole package, the whole package. I love what I do, and I consider me being pretty good at what I do. I’ll always strive to be, if not the best, then one of the best. That’s just what I get high off of, getting in the ring and just showcasing my talent. That’s what it’s all about. I’ve never been one about showcasing your body, your T&A, and all that. I’ve never been about that. I’ve always been about strictly in-ring work, that’s my thing.”