The Streak: Slaying a giant 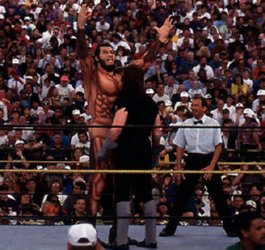 It’s very seldom for The Undertaker to enter any match as the underdog; much less a WrestleMania match. But at WrestleMania 9 in Las Vegas, all bets were against him, as the Deadman went face to chest with the seven-foot-seven Giant Gonzalez.

“I was amazed that Undertaker’s skill level was able to garner a solid match against the very limited Giant Gonzalez. WrestleMania 9 was a testament to the fact of just how great Undertaker was as an in-ring performer, if anyone had any doubts,” WWE Hall of Famer Jim Ross told SLAM! Wrestling. “It was my first live event in WWE, so the entire day was eventful and memorable, but Undertaker’s entrance and presentation was awe-inspiring.”

Many stood back and watched in awe, as these two giants collided. This included Gonzalez’s own manager, Harvey Whippleman.

“Being at ringside and involved in any match with The Undertaker is an honor in itself, considering the calibre of a superstar the Deadman actually is, and being there on the grandest stage of them all, WrestleMania, only intensifies the magnitude,” Whippleman told SLAM! Wrestling. “Gonzalez, may he rest in peace, wasn’t probably the greatest opponent that The Undertaker has gone up against at WrestleMania. But he was certainly the biggest.”

Jorge Gonzales was actually a basketball player in Argentina and later played for the NBA’s Atlanta Hawks, before ever making his way into the professional wrestling business.

He eventually caught the eye of media mogul Ted Turner, who actually owned the Hawks at the time, and then offered Gonzalez a job at World Championship Wrestling. Though Gonzalez was used in small doses as El Gigante, he certainly made a big impression on the wrestling world, as he literally towered above all of his opponents. The majority of his career was spent as a babyface in WCW, as he would occasionally team up with Flyin’ Brian Pillman, and he also served as an enforcer for the World Championship match between Sting and Ric Flair. Gonzalez was actually handcuffed to Ole Anderson on the outside.

His WWE career was quite forgettable. Once he debuted, Gonzalez immediately started a feud with The Undertaker, which reached its climax at WrestleMania and then culminated at that year’s SummerSlam.

“I was somewhat amazed that he (Gonzalez) lasted as long as he did in the business, and had the level of success that he experienced,” Ross said. “Nonetheless, Jorge was a good person in an extremely large body. Needless to say, Jorge had a memorable presence and was a classic example of being an attraction.”

Perhaps Gonzalez’s greatest claim to fame was when he made the millennium edition of the Guinness Book of World Records for being the tallest wrestler of all time.

“He (Gonzalez) was of extraordinary size in a unique vocation, so making this distinction wasn’t totally a shocker,” Ross said.

The WrestleMania match was far from a catch-as-catch-can classic, and got very ugly, very fast.

“I called many brawls, so this bout was simply adapting and reverting back to what I had experienced in the past,” Ross said. “Not unlike broadcasting a slugfest in boxing versus a contest where the sweet science is in full forced, or a low-scoring football game versus a high-scoring one, etc. Broadcasters have to adapt to what they see on their monitors.”

The end result was Gonzalez getting disqualified after using a cloth, supposedly covered with chloroform, to smother The Undertaker. Undertaker was quickly stretchered to the back, after being rendered unconscious. But then, fans went nuts when they heard yet another gong, signifying that The Undertaker was indeed still breathing and he made it back to the ring, finally knocking Gonzalez off his feet after a series of running clotheslines.