Edge made a career out of shocking the world. Whether it was cashing in Money in the Bank twice, surprising everyone by returning early at the 2010 Royal Rumble, or staging a live sex celebration with Lita on Raw, Edge was given the nickname “The Ultimate Opportunist” for a reason. In his final WrestleMania match, the 2012 WWE Hall of Fame inductee successfully defended the World Heavyweight Championship against Alberto Del Rio. 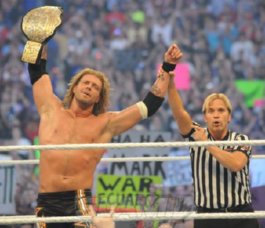 Edge gets his hand raised by referee Charles Robinson at WrestleMania 27. Photo by Mike Mastrandrea

Why it was important: On the April 11 edition of Monday Night Raw, Edge shocked the world one last time when he announced his retirement from professional wrestling due to cervical spinal stenosis, making his match with Del Rio at WrestleMania his final big match.

Even being completely in the dark about his injury, you could tell there was something a little bit different about the “Rated R Superstar” during his match with Del Rio. Edge certainly pioneered a high-risk style in the late 1990s, but in his later years, toned that down for the most part, simply focusing on being a pro wrestler instead of taking unneeded and unnecessary risks.

His match with Del Rio, though, was different. Edge pulled out all the stops, doing things that weren’t usually in his moveset. At one point, with Del Rio on the floor, Edge hit the back ropes, came flying across the ring and went over the top rope with a cannonball right onto Del Rio.

“Rarely do you see Edge put his body in that much danger,” Michael Cole said on the broadcast.

As the match progressed, Del Rio would work over Edge’s arm in hopes of softening it up for the deadly cross-armbreaker. Del Rio would apply the move, but Edge would twice escape, eventually hitting the spear to retain his championship for the final time.

This is the only moment on the list that is here in retrospect. At the time, it was a nice win in a very good match that opened WrestleMania. But in hindsight, this is a big moment, as Edge retained the title in his last big match, going out on top, retiring as World Heavyweight Champion.