The French Angel was more man than monster

Maurice Tillet — The French Angel — was one of wrestling’s biggest stars in the late 1930s and the 1940s, and provided some wonderful copy by the newspapermen of the day. The St. Louis Post Dispatch, reporting on Tillet’s win over Leo Lefebvre on March 19, 1940, provides one such example: “The ‘Angel,’ stripped, proved to be a misshapen specimen of manhood. True, his big hideous head scared the women around the ringside, and probably would alarm even Boris Karloff. He has a barrel-like chest, a long torso, but his arms did not seem possessed of unusual strength and his legs were the legs of a 36-year-old man.” 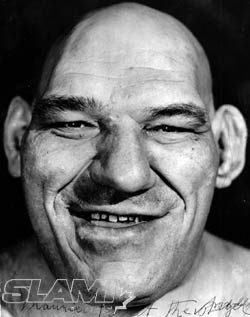 A multi-time world champion in the 1940s and one of the most recognizable men in pro wrestling — and crossing into mainstream culture — Tillet is a worthy inductee into the Pioneer category for the Class of 2012 at the Pro Wrestling Hall of Fame in Amsterdam, NY.

Tillet was born on October 23, 1903 in the Russian Ural Mountains to French parents, his mother a French teacher, and his father an engineer on the railroad, who died when Maurice was young. “He was perfectly normal at birth, had a keen mind, an intelligent curiosity and a well-built body. He was a slim boy with blonde hair and an angelic face. His friends nicknamed him Angel,” reads The French Angel Record Book.

In 1917, the Russian Revolution forced Maurice and his mother back to France, where she taught languages at a women’s college in Rheims. At age 17, Maurice noticed an unusual swelling in his hands, head and feet, and doctors diagnosed it as a disease called acromegaly, a condition that causes swelling of bone and is caused by malfunction of the pituitary gland.

For five years, Tillet served in the French Navy, an engineer on cruisers, torpedo boats and submarines. His disease forced him to set aside other dreams, including practicing law.

In February 1937, Tillet met Carl Pojello an American wrestler of Lithuanian descent in Singapore. Pojello convinced Tillet that pro wrestling would be his route to riches, and they set off for Paris for training. “The Angel” wrestled in England and France until World War II drove the pair to the United States in 1939.

It was Boston promoter Paul Bowser that saw dollar signs everywhere, and pushed The French Angel to the moon in 1940. At 5-foot-7, 270 pounds, Tillet was an awesome, if disproportioned, physical specimen, able to shuffle three decks of cards at a time in his massive hands, or pull a subway car. News of the new star spread quickly and spectators flocked to see him.

“The fans crowded arenas to get a look at him and when the aberrant animal ambled down the aisle their curiosity was well satisfied,” wrote Paul Boesch in his autobiography. “The Angel was difficult to wrestle. His size and his balance, along with a certain clumsiness that created an unorthodox defense, made you wary when you entered the ring with him.”

Bowser and Pojello protected their meal ticket, and he went 19 months undefeated in one stretch.

Tillet held the Boston version of the World title from May 1940 to May 1942, and again for a few weeks in 1944, along with the Montreal version of the belt in the spring of 1942. He held wins over all of the top stars of the era, from Strangler Lewis to Man Mountain Dean to Joe Savoldi to Lou Thesz.

Given his success, it was a natural for enterprising promoters to bill their own characters, and no promoter was more enterprising than Jack Pfefer. The wrestling impresario would promote a stable of bald-headed angels. The greatest of the knockoffs was The Swedish Angel (Phil Olaffson, who would end up promoting Salt Lake City), who actually had a series of matches with Tillet. Other Angels included the Super Swedish Angel (Tor Johnson, who achieved lasting fame through Ed Wood’s notorious B-movie Plan B From Outer Space), Polish (Wladislaw Tulin), Russian Angel (Tony Angelo), Canadian Angel (Jack Rush), Czech Angel (Stan Pinto), Irish Angel (Clive Welsh), Golden Angel (Jack Falk), Black Angel (Gil Guerrero) and the Lady Angel (Jean Noble).

In the Pfefer Collection at the University of Notre Dame, there is a letter from Ed White to Jack Pfefer, dated October 29, 1940, where White refers to attempts to stop the non-stop use of the “Angel” nickname.

“Pojello appeared before our Commission and asked them to stop everybody else from using the word ‘Angel’; so they had a good laugh over it. They kidded him some and told him the Angels ought to get together and wrestle it out to see which was the best Angel,” wrote White. “Of course Karl had to say he was willing. The French Angel by the way is so sick with ‘Yellow Jaundice’ that he had to call off a lot of shows. That is a good word, don’t you think, for him and a lot of others in our business. The yellow color must come out some time.”

In his autobiography, Freddie Blassie remembered Tillet for his ability to deliver another color — green.

“The French Angel, Maurice Tillet, had a distorted head and amazing strength. Pfefer even managed to get him publicity outside the wrestling world when he pulled some subway cars in New York City. He was a nice enough guy, but it was hard to have a conversation with him. Besides his French accent, his vocal cords sounded like they were stretched — a little bit like Andre the Giant a few decades later — and he bumbled when he talked. People have asked me what kind of condition he had, but, to tell you the truth, I never thought to ask. The wrestlers would just say, ‘He was born that way,’ and that was that. Plus, he was growing money, and you couldn’t knock the pocketbook.”

By 1945, Tillet began putting new stars over, but still continued to travel extensively, even though his health was failing.

“Gentleman” Ed Francis wrestled and traveled with Tillet near the end of the Angel’s career. “His head was so big, you couldn’t get your arm around his head. He was so weak at that time, he coached me on what to do; if he went down to his knees, you had to pick him up, help him back up.”

The French Angel’s last match was on February 14, 1953, a loss to Bert Assirati in the same place it started — Singapore.

Away from the ring, Tillet was shy around people he didn’t know, but brilliant as well, a polyglot and avid reader.

“He was very stiff and slow, had very slow reflexes. I really felt sorry for the guy,” said Lou Thesz in a 1997 interview with Whatever Happened To … “He was a lovely man, too. We traveled by train together one time, from Montreal to Quebec City. We talked. He spoke enough English to tell me his mother was a schoolteacher and his father was a farmer. He came from normal parents. Very, very nice guy.”

By 1954, Pojello had lung cancer and Tillet had recently recovered from pneumonia and was suffering from a heart condition. Karl and Maurice, at that time, were living in adjoining rooms at 726 W. Garfield Blvd in Chicago. Pojello died on September 4, 1954. When informed of Karl’s passing, Maurice became ill and was taken to a county hospital where he passed away 13 hours after his friend. They were buried side by side in the Pojello family plot in the Lithuanian National Cemetery in Justice, Illinois.

The official cause was heart disease, but “Tough” Tony Borne, who knew both starting out in Chicago, said he died of a broken heart. “He was a money-maker for Carl. Carl was basically interested in the dollar. The French Angel told me that 50 cents of every dollar he made went to Carl,” said Borne. “He wasn’t bitter about it at all. In fact, Carl’s wife told me, ‘Carl doesn’t love me, he loves the French Angel.’ Dollar signs.”

— with files from Steve Yohe and The French Angel Record Book