PWG and breakfast with wrestlers wrap up WrestleReunion 6

Home in Calgary after my third consecutive year of WrestleReunion in Los Angeles, let me give the readers of SLAM! Wrestling some advice. If you are going to be in Miami for Wrestlemania weekend, or are able to be in Toronto April 13–15th, go immediately to the WrestleReunion website and get yourself tickets to the conventions in those cities. It was very clear early in the weekend that the fans were having the time of their lives. The experience is worth every penny.

“You have no idea what it means to me. This is my baby, I want to make these fans happy, because doing that makes me happy. Seeing these people live out their childhood dreams like eating breakfast with Kevin Von Erich, who they watched growing up, having them thank me and [organizers] Sal [Corrente] and Michael [Bochicchio] and the team for doing this every year and how much it means to them makes my day, it makes my life,” said fan coordinator Amber Gertner. “I just read an e-mail from someone that almost brought me to tears because he was so happy to come and live out his dream as he had never been able to do that. I know the rest of the staff appreciate that but for me I live and strive to make people have. I looked around the breakfast room this morning and saw everyone’s smiling faces, everyone was so happy and it made me happy.” 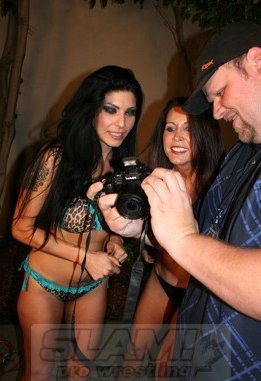 Sunday was the quietest day of the weekend. The convention hall aspect was closed, leaving just the Breakfast with the Champions and Pro Wrestling Guerrilla shows. How many people get to say they had breakfast with Rick and Scott Steiner, Vader, or Tommy Dreamer? Each table had one or two talents that told stories and chatted casually with over eggs, fruit, breads and bacon. I was seated with Tommy Dreamer and Mikey Whipwreck, who are two of the nicest guys you could meet, and very funny. “The Destroyer” Dick Beyer was the guest speaker who shared stories from his career as wrestlers and fans alike listened closely.

Unfortunately WrestleReunion had a bit of a surprise when the doors were opened to them for the breakfast — the 10 person per table setup they booked was instead an eight person per table. Some scrambling and shuffling left fans still happy but it was frustrating for sure. For the fans the Westin had many advantages — everything except for some events in a theatre on the second level was on one floor and easy to find. The autograph session was held outdoors on a patio, a nice change from a windowless, hot basement that had been at the Hilton. From a fans perspective the Westin was great, but there were many challenges behind the scenes.

“It was definitely a vast difference, there was good and bad with both the Hilton and the Westin. We decided to give the Westin a shot as they really wanted us. The esthetics of the building was really nice, everything was pretty much on one floor and they had a great theatre room,” said Gertner. “The fans really seemed to like a hotel. I don’t know where we will be next time, but I think fans appreciated the layout. It was easier to communicate where everything was. In the last few years we had challenges where people couldn’t find rooms and missed out on things, we didn’t have that problem at the Westin.”

After the breakfast, fans converged on the ballroom for one final wrestling event as Pro Wrestling Guerrilla offered “KurtRusselReunion 3.” The show featured many of the talents from Dragon Gate USA that had wrestled Friday night along with PWG mainstays like Kevin Steen, Super Dragon, Willie Mack and Joey Ryan. Traffic from a multi-car accident in Boston prevented Eddie Edwards from getting to Los Angeles, so Davey Richards teamed with Harry Smith to face The Young Bucks. At the first two L.A. conventions PWG was the Saturday night show and featured some legends. This year WrestleReunion really wanted to offer more, Gertner said.

“We wanted to do three shows for sure. PWS is something we do from time to time with Highspots, we’ve run several smaller shows under the name in North Carolina. We wanted to take talent from the convention and mix it up and give a versatile show. It was honestly one of the best wrestling shows I have seen in years, it made me feel like a kid, I’ve lost my voice from screaming and having a good time. It had something for everyone and I thought it came off very, very strong.”

For fans of anything — whether sci-fi or wrestling or football — when an event happens that gets you close to your heroes it is pretty special. It is also really sad when it is over, and you go back to your real life. For Gertner and everyone behind WrestleReunion, real life is back to work in finalizing details for two conventions in April. Gertner is excited to be heading to Miami, and to Toronto for WrestleReunion’s international debut.

“I am going to wake up tomorrow and start preparing. In a way sometimes it gets easier and easier. L.A. is hard for me because working for Highspots, I do a lot of the shipping so it can be hard to get to my WrestleReunion stuff with Christmas. I will have more time on my hands to prepare for Miami and Toronto. We did a one-day convention in Atlanta last year that was a huge success, we expected maybe 100 people and had over 500 show up. Toronto is a completely untapped market and I think it will do well. I don’t know if we have anything after Toronto but I am excited for future Wrestlereunions. Things have gotten a lot easier; two years ago when we spoke it was very different. I was just getting my feet wet, now I feel a lot more confident and that things are running smoother every year and I hope that keeps continuing on.”

Jason Clevett flew home from LA and drove directly to Banff for a City and Colour concert. He is now going to sleep for a few days of wrestling detox.