LOS ANGELES – It seems there is no perfect formula to running a convention. In the past two years Sunday had become somewhat of a ghost town, and in some cases attendees who flew in to Los Angeles would have to leave on Sunday to make it home in time for work, missing out on some signings. To address that, WrestleReunion had all of their VIP guests in a three-hour signing block, as well as most of the deluxe photos, as well as the convention room itself which will not be open Sunday.

The positive is that it meant that people could attend just the one day. On the other hand, trying to cram everything in could prove hectic and challenging at times. In addition to 17 vendor guests over 50 other wrestlers were in attendance signing autographs and taking pictures. There was everything from recent WWE stars like Chavo Guerrero to blasts from the past like valet Dark Journey. RF Video hosted Kane’s former TV girlfriend Tori, Guerrero, Konnan, and Tajiri while American Icon & Autographs had a long list of guests such as Sid Vicious, Lanny Poffo, Ken Shamrock, Brutus Beefcake and Mike Tyson. Even the former G.L.O.W. Girls were on hand. 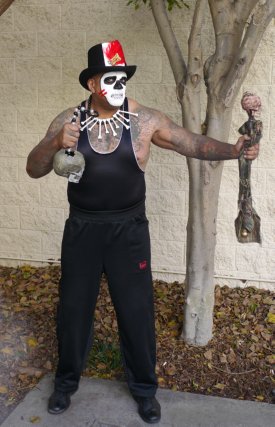 WrestleReunion offered some unique opportunities for photos as well. Much like Friday’s “Three Face of Foley” fans had the chance to get a rare photo with all three members of Rhythm & Blues – Jimmy Hart, The Honkytonk Man, and Greg Valentine who sported dark hair for the shoot. TNA’s Miss Techmacher in a bikini was very popular. For the first time in years Charles Wright donned the makeup and costume for Papa Shango, resulting in one of the longest lines. He expressed surprise at the popularity over an earlier pimped-out Godfather photo. For many of us, The Godfather was part of our teens or twenties, while Papa Shango haunted us in our childhood. Something about being kids again is part of the appeal of events like these, even if the person doesn’t look the same. It was a pretty cool memento, but Wright said his phone is now ringing off the hook requesting him to appear as Shango.

Many of those names were also scheduled to wrestle. In 2010 and 2011 Saturday night featured SoCal’s own Pro Wrestling Guerrilla as the feature show. While excellent shows, they did end up fairly long in an effort to balance both PWG’s regular roster and the legends. So this year Pro Wrestling Superstars was born. Featuring a blend of legends and current independent superstars the show was ridiculously awesome.

After Vader interrupted a match and destroyed two wrestlers, the New Age Outlaws and The Steiner Brothers faced each other for the first time ever, with Mick Foley as the guest referee. Foley, who cut a promo with Mike Tyson in the ring at the start of the night promised Tyson would watch his back. In a display of complete stupidity a fan threw a beer in Scott Steiner’s face, and Steiner seemed ready to tear him apart. While a lot of the match was comedy, the four actually brought their working boots and had a great match. Scott shoved Foley who pulled out Mr. Socko, but when Steiner turned around Mick tossed it behind him. Billy Gunn took advantage to score the win with the fameasser. 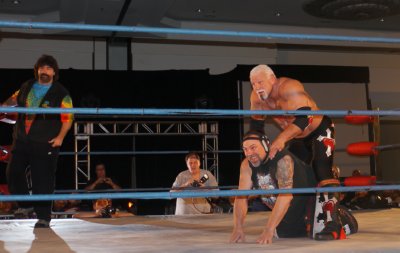 Mick Foley is the special referee for the Steiners against the New Age Outlaws.

Showcasing the diversity of the talent on hand, the next three bouts included Fit Finaly vs. Colt Cabana in a European rules match with rounds, a tag team tilt featuring Yoshiro Tajiri & Mikey Whipwreck teaming for the first time in a decade against Caleb Konley and Cedric Alexander, and a lucha minis match between Mascarita Dorada and DEMUS 316. In another never before seen match, Tommy Dreamer and Kevin Steen brawled in a streetfight. Weapons included a stop sign, cane, and a giant hammer brought by a fan. Although Steen scored the win, he praised Dreamer … before Raven took Steen out and hit Dreamer with a DDT, which got a massive response.

Roderick Strong and “The Manscout” Jake Manning put on a solid bout that took awhile for the crowd to warm up to. It did not take long for the crowd to warm up to Harry Smith vs. Davey Richards. Smith looked like he had something to prove, and he and Richards tore the house down. In no time fans were chanting both of their names as well as “this is awesome” as they traded holds and built up a tremendous match. Smith tried to snare Richards in the same package that his father Davey Boy Smith used to capture the Intercontinental championship, but Richards reversed it to pin Smith’s shoulders to the mat.

“How stupid are they up North for letting someone like you go?” Richards asked as both men received a standing ovation.

Keeping with the theme of great matches, The Young Bucks found themselves across the ring from a legend, Japanese icon The Great Sasuke, who teamed with El Generico. Generico payed tribute to his partner by having half of his mask like Sasuke’s. In a back and forth, high-flying encounter, Sasuke and Generico secured the win.

The grand finale of the evening was the “Wrestle Royale,” a Royal Rumble style battle royal. Matt Classic and Lanny Poffo started things off, and soon the ring was full of legends like Mando Guerrero, Kevin Sullivan, and Greg “The Hammer” Valentine. While impossible to top last year’s epic showdown between Terry Funk and Roddy Piper, the battle royal was highly entertaining. In a unique idea, a fan won an eBay auction to enter the ring against 19 legends. He soon found himself on the end of Brutus Beefcake’s sleeperhold, and received a haircut courtesy of “The Barber.” This once in a lifetime moment seemed worth the $675 he bid to get the chance. Beefcake managed to survive until the final two, but it was The Godfather who walked away the winner and invited the audience to step aboard the ho train.

Sunday will be a quiet day around the LAX Hilton. Fans will have the chance to share breakfast with wrestlers before the matinee PWG show wraps things up.

Jason Clevett is up at 3am writing this report. He hopes he does not fall asleep at breakfast, as judging from the show his tablemate Vader may destroy him.