LOS ANGELES – One of the nice things about WrestleReunion is they have always strived to make the VIP ticket experience special. While to some getting photos and autographs from 17 wrestlers would be worth the ticket price, Friday offered even more bang for your buck with a series of VIP exclusive events.

The first was a tribute to the history of Los Angeles wrestling, hosted by Dr. Mike Lano. Lano spent hours contacting legends, finding photos and footage, and putting together the presentation. Southern California legends like “Superstar” Billy Graham, “The Destroyer” Dick Beyer, “Judo” Gene Labell, Mando Guerrero and Rock Riddle were all in attendance for the slide show and to talk about the old Hollywood territory. Long-time announcer Migel Alonzo, who recently was released from the hoispital after a car accident, received multiple standing ovations. The event was as much — if not more — for the wrestlers themselves than the fans, but it was pretty amazing seeing them all in the room together.

VIPs then headed to the main ballroom for a three-match Arena Chicks card. The main event saw the After Midnight Express of former TNA knockout Cookie and former WWE and TNA leading lady Shelly Martinez face Angel Orsini and Amber O’Neal, known as Fire and Ice. Orsini and O’Neal made for an instantly unlikeable duo, and the fans were not happy when O’Neal threw powder in Martinez’s face to lead her team to victory. 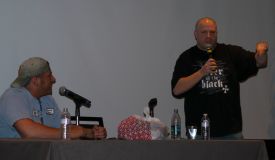 If you have not heard Colt Cabana’s Art of Wrestling podcast you really are missing out. A blend of hilarity and history, Cabana’s comic timing blends well with giving his guests the chance to tell stories. The live taping featured former ECW champion Mikey Whipwreck, who shared stories about his first match with no training against Mr. Hughes and how his career went from there. He expressed his pride in having trained current WWE wrestlers Zack Ryder and Curt Hawkins as well as admitting that his Saturday night tag team match, reforming his Unholy Alliance with Tajiri to face Caleb Konley and Cedric Alexander “scared the hell out of him” but promised to give his all in the match. The broadcast will be available on Thursday on the Art of Wrestling website.

The final VIP only event was a private Q&A session with The New Age Outlaws and Mick Foley. The trio had the audience laughing (as seemed to be a theme on Friday) with stories as well as good natured ribbing of each other — primarily Jesse James teasing Billy Gunn about how much better James is. When the duo’s first time ever tag match Saturday night against The Steiner Brothers was brought up, James made a promise:

“Let me go ahead and start off by saying if you have high expectations for that match you are about 10 years too late. If you have just come to see me do my entrance and intro promo then you are going to be satisfied, it is all downhill after that.” he joked. “I wish we could have worked with them 10 or 15 years ago when we were just starting out and they were in their prime because it would have been a heck of a match. It will still be … nostalgic to see that match tomorrow. And by nostalgic I mean slow paced and painful for me.”

“May I suggest you and Scotty Steiner in a battle of dueling promos?” offered Foley.

Another offering from WrestleReunion is their delux photo ops, which feature wrestlers in gimmicks instead of just street clothes. It was a rare opportunity for fans to get pictures with all three “Faces of Foley” – Cactus Jack, Dude Love, and Mankind. Foley brought along all three gimmicks as well as took on each character’s mannerisms. Each person who had their photo taken with Mankind got a unique Mankind quote as well. After Foley’s photos were done, Shelly Martinez and Ric Flair’s former valet Fifi the Maid donned bikinis for photo ops.

In 2010 and 2011 Ring of Honor kicked off WrestleReunion weekend. With new ownership and a focus on areas where their TV show airs, ROH declined to return, allowing Dragon Gate USA to bring its stars to Los Angeles. Wrestlers like CIMA and Low Ki were no strangers to SoCal fans who had seen many of the talents previously in Pro Wrestling Guerrilla. Highlights included a brutal tables match between Sami Callihan and AR Fox, England’s Pac tearing the house down against Akira Towaza, and Open The United Gate Tag Team Champions CIMA and Ricochet successfully defending their belts against Masaaki Mochizuki and Jimmy Susumu.

If all that wasn’t enough, fans and wrestlers gathered for a live edition of Five Dollar Wrestling. Co-host Colt Cabana said “you’ve seen some of the best wrestling in the world from Dragon Gate. Now for the exact opposite.” Cabana and comic Marty DeRosa provided commentary on horrifically bad matches featuring the likes of Mr. Hughes, David Flair, Buff Bagwell, and Jimmy Snuka. As stated earlier, Cabana is hilarious and his teaming with DeRosa is comedy gold both on $5 Wrestling and their show Creative Has Nothing For You. Most of what they said is not suitable for print, neither is the story and subsequent cell phone photos from Tammy “Sunny” Sytch. As with Cabana’s podcast, $5 Wrestling is worth checking out. The DVDs are indeed only $5 and available through Highspots.

With all of that crammed into one day, fans and WrestleReunion staff were pretty tired. Saturday will be even crazier with over 60 wrestlers and guests from Vader to Mike Tyson invade the LAX Westin. It will be a wrestling fan’s dream day for sure.