Punk, Jericho get big pops in the ‘Peg

With the Winnipeg Jets having a well-deserved night off between games at the MTS Centre, WWE swept into town for their lone appearance in the River City for 2012.

Billed as a “Supershow”, the card featured the best of both Raw and Smackdown over eight matches.

The moment with the highest amount of anticipation, naturally, was the return of Chris Jericho to Winnipeg, his hometown. Jericho didn’t disappoint as he kept his silence streak alive, victimizing everyone’s favourite legal advisor, David Otunga, putting him in the Walls of Jericho to the delight of the crowd. What set Y2J off, you ask? Otunga asked Jericho to take off his jacket, saying it could cause seizures. 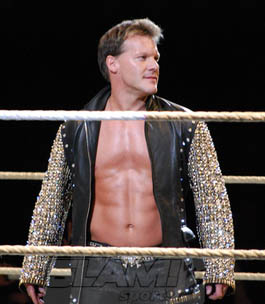 Chris Jericho and his shiny new jacket return to Winnipeg — but he didn’t say a word. Photo by Jon Waldman

The card was main evented by CM Punk and The Miz in a cage match, which easily took Match of the Night honours. Punk and Miz pulled out all the stops, including pulling off a Superplex over the cage in one amazing spot. Ultimately, fans knew Punk was going to retain, since the title was on the line; but that didn’t dampen any spirits as fans gave him the second-loudest ovation of the night.

The rest of the card broke down as follows:

Match 1 Alex Riley fell to Ryback via a spear (and a solid one at that). Interestingly, Otunga introduced Ryback before the match began and even introduced him as a former member of Nexus (Ryback, of course, is Skip Sheffield).

Match 2 Home country advantage wasn’t enough for Nattie Neidhart, as she and Beth Phoenix were defeated by Eve Torres and Kelly Kelly. Kelly got a surprise roll-up on Phoenix for the duke. The highlight, perhaps, was Nattie bringing a box of Kleenex to the ring and tossing tissues to the fans, furthering the Pin-Up Strong storyline of making their opponents (and fans) cry.

Match 3 Jack Swagger threw out an open challenge to anyone in the back to challenge him for the U.S. Championship. R-Truth answered the call and defeated the All-American American. In true Dusty form though, Otunga came out and said the title couldn’t change hands because the title stip wasn’t authorized.

Match 4 In our second title bout of the evening, Cody Rhodes defeated former Legacy brother Ted DiBiase Jr. Rhodes was able to overcome a loud “Goldust” chant from the Winnipeg crowd, but the sentiment definitely got to him, as he even jumped into the crowd at one point to stare down some particularly rowdy hecklers.

Match 5 Sheamus got the third loudest pop of the night when he came out to face Wade Barrett. The two put on a fairly solid match which ended with the Brogue Kick. (Incidentally, Barrett cut a promo beforehand, revealing that Randy Orton promised on Smackdown to return at the Royal Rumble, which ensured that Winnipeg show attendees didn’t miss the “big news” from Friday’s broadcast.)

Match 6 Los Colons v.Dos took on Kofi Kingston and Mason Ryan in a match which actually disappointed. There certainly was hope that there would be more high flying than there was. Ryan didn’t look entirely out of place tagging with Kofi, so don’t be surprised if the two end up tagging on Raw soon.

Match 7 Daniel Bryan and Big Show squared off in a fairly good bout, which was advertised as a three-way also involving Mark Henry. Bryan fell victim to Show’s WMD punch but Rhodes and Barrett interfered, drawing the DQ win for the American Dragon.