The professional wrestling business is certainly a lot more family friendly these days, with all wrestlers essentially belonging to the same extended family. Perhaps the greatest examples of a true wrestling brotherhood are the Pacific Islanders of the business.

“Polynesians always take care of each other, no matter if they’re from the Samoan islands, or I’m from the Fiji islands,” said WWE Hall of Famer Jimmy “Superfly” Snuka. “We’ve always been close to each other.”

Ever since professional wrestling cannonballed into international waters, it seems like the islanders of the business have been influenced the most. And as much as the business rubbed off on them, they may have had the same impact on the business as well.

“Our family is very blessed with good genetics and athletic ability, along with the talent to perform with all of our hearts,” said former WWE Tag Team Champion Afa Anoa’i. “We owe who we are to the Hart family, who gave us our start, and Vince McMahon and his family, for giving us the opportunity for several generations to showcase our God-given talent. I’ve always told Vince McMahon himself to just let my kids get into the ring and show (him) what they have, and if (he’s) not happy with them, they can go home. I’m happy to say that they all passed the test, and I’m confident that there will be Samoans in the WWE for many years to come.”

The image that most people associate with Jimmy Snuka is his incredible leap off the top of a steel cage onto a prone Don Muraco. But what sometimes goes overlooked are the contributions of Snuka, and other islanders to the wrestling business. Men like Snuka helped paved the way, not only for minorities, but for all future wrestling superstars.

Al Lolotai had experienced years of success in the NFL in the 1940s, before ever trying his hand at professional wrestling. He will always be remembered as not only the first Samoan, but the first non-white man to play in the modern NFL. He would then make wrestling his career in 1950 as Alo Lolani. Lolani became the NWA Central States Heavyweight Champion and NWA Hawaii Heavyweight Champion within five years. He would later win the NWA North American Heavyweight title.

When most current fans think of Samoan wrestlers, perhaps the most common names that comes to mind are Maivia and Maiava. Prince Neff Maiava entered the wrestling scene in 1950. Like Lolani, he also had great success in the NWA, as a Hawaii Heavyweight and Hawaii Tag Team Champion with his partner Lord James Blears. Neff also had a unique move, where he would use his own hair to cut his opponents’ hands. 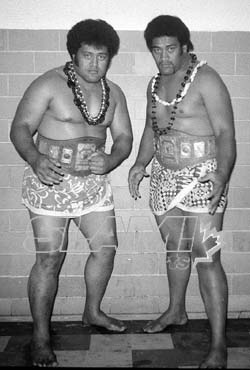 Then along came the High Chief Peter Maivia, who debuted in the early 1960s, and won titles in just about every territory he worked. Actually, before his grandson The Rock ever appeared on the silver screen, Peter himself had some acting experience, as he appeared in the James Bond film You Only Live Twice. He wasn’t in any starring role, but it didn’t really make a difference, as he was a huge wrestling star anyway. Peter eventually moved on to the WWWF, where he had notable feuds with Superstar Billy Graham and Bob Backlund.

“It all started out with my uncle High Chief Peter Maivia, who helped train me, and handed the torch to me to continue the Samoan legacy,” Anoa’i said.

Fast forward to the year 1996, where one of the biggest stars in wrestling history debuted at that year’s Survivor Series. He might be known as Dwayne Johnson in Hollywood, but all wrestling fans know him as The Rock. Initially the fans hated him, but The Rock used his incredible talents and natural charisma to turn those fans around in the blink of an eye, or maybe the raise of an eyebrow. He became the first man in history to hold the WWE title seven times, which was a big deal at the time, especially considering that he did it within six years.

The Rock’s ancestors often feuded with another great wrestling family, the Anoai’s. The patriarch of that family was Afa, who teamed with his brother Sika, whom he also trained, to capture the WWE Tag Team Championships on three occasions.

“We were one of the few real brother teams in the sport,” Afa said. “We trained our sons and nephews, which included Samu, Yokozuna, Tonga Kid, Rikishi, LA Smooth, Dwayne Johnson, Afa Jr., Umaga, Rosey, Reno the Black Pearl, Leakee and Sean Maluta; also great-nephews The Usos and grandson Lance Anoa’i, niece Tamina, and there are more in the workings!”

And apparently acting may run in the family, as Afa has starred in several wrestling-related movies, as well as an episode of Miami Vice in 1987. 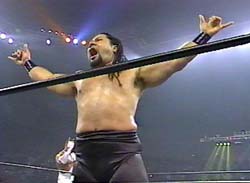 Another island great was Tonga Fifita. Some knew him as Meng, most knew him as Haku or King Tonga, but everybody agrees he was one of the toughest guys in the history of the business — although he was equally acknowledged as one of the nicest.

“I came over from Japan to the WWE, and I learned from everybody I watched,” Fifita said. “They keep telling you to watch every match. It was a great experience for me. I always looked up to those who came before us and tried to follow them.”

Fifita was mostly recognized as a tag team wrestler. Before spending years in WCW, teaming with The Barbarian as The Faces of Fear, Fifita’s early years with the WWE were spent teaming with Afa’s nephew Samuel (Tama), as The Islanders. The duo was managed by Bobby Heenan, and was involved in a heated rivalry with the British Bulldogs (The Dynamite Kid and Davey Boy Smith), which reached its boiling point when Heenan dognapped the mascot of the Bulldogs, Matilda.

“WWE put us together, and I thought it was a good experience,” Fifita said. “Even though I was older, I kind of felt like Tama had more experience.”

Perhaps Fifita’s greatest claim to fame was winning the WWE Tag Team Championships with the late Andre the Giant; it was the only WWE title that either of them ever held.

Prior to becoming Rikishi, Solafa Fatu Jr. teamed with Afa’s son Samula Anoa’i as The Headshrinkers. The team followed in the footsteps of their father/uncle and became the WWE Tag Team Champions. Rikishi also had some success as a singles competitor, winning the WWE Intercontinental title, and also participated in a huge angle, involving the company’s top star “Stone Cold” Steve Austin. 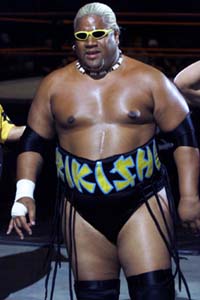 “My uncles didn’t mess around when it came time to train. They were always hard on us — bumps after bumps after bumps,” Fatu told Fighting Spirit magazine. “They wanted to teach us to be safe and protect our body at all times as well as the body of the wrestler you’re working with; always safety. Then came the study of tape after tape, to watch for mistakes and other important things in the match. Then the business part; learning what to expect from promoters and how to talk to them and work together. We lived by our three words: training, studying, working!”

Islanders have also experienced their share of royalty. The late King Curtis Iaukea used to get the people of Australia to bow at will in the 1970s. Iaukea was also a co-holder of the WWWF Tag Team Championships with Baron Mikel Scicluna. Fifita also sat on the throne as King Haku.

There are also those wrestlers who are of Polynesian heritage, but were announced as hailing from another country altogether. Maybe the most famous example of this is former WWE Champion Yokozuna, who was actually an islander, but was billed from Japan. And then there are some wrestlers who were announced as being from Hawaii, but were not of Hawaiian descent, such as Ricky Steamboat and Mr. Fuji (originally).

Unfortunately for some, success doesn’t always come easy. There are those such as Afa and his brother Sika, who have had to overcome hardships to pave the way for future generations.

“Back in the 1970s, there was a lot of discrimination,” Afa said. “My particular story, while negative at the time, ended up becoming something very positive. My brother Sika and I were in Louisiana, and went into a barber shop for a haircut; back in the day, Sika and I were clean-shaven and had short hair. When we went in, a black man was sweeping, and silently signaled for us to leave the shop. We didn’t pay any attention to it, and continued to stay there. Then the barber, a white man, asked us, ‘Can I help you?’ I said, ‘We’re here for a haircut.’ The barber said, coldly, ‘We don’t cut your kind of hair.’ From that point, we were so offended, that we decided we would never cut our hair again, which turns us into The Wild Samoans, and our careers took off!”

On an episode of Piper’s Pit in the 1980s, Snuka appeared as a guest, and was infamously battered over the head with a coconut and humiliated. Some may consider this kind of thing questionable, but Snuka had no problem with anything he was involved in, and always thought very highly of the company and the people he worked with. He saw it as just another wrestling angle, and was happy to do something for the good of the business.

“I never looked at it as discrimination. There is jealousy in every business. I was very relaxed and did not pay attention to that stuff. I just wanted to do my job,” Snuka said. “I always did what I thought was the right thing to do for business. I just wish it (the feud with Piper) could have ended. Our thing wasn’t even over with and I was disappointed that we couldn’t finish it.”

Continuing the tradition of islanders in wrestling is Samoa Joe (Joe Seanoa), who may be the most famous islander of the new breed, even though he is from California. TNA has also signed Zema Ion from The Philippines.

Not to be outdone, the WWE has its own batch of island talent. This includes the Uso brothers, who hang from the branches of the Anoa’i family tree as well; they are the twin sons of Rikishi. And hoping to make her father proud is Snuka’s daughter Tamina. Snuka’s son Sim also had a brief run in the WWE as Deuce.

“I love seeing my daughter there, just like my son was,” Snuka said. “I always take every chance to watch her. I always tell them (children) to take care of number one.”

Snuka was always very proud of his heritage and his family. He always treats everyone as his equal and expects nothing less in return. Other islanders may have similar opinions.

“The Samoan families were brought up to be very close and tight-knit, and respect each other,” Afa said. “We have always been close, and always will be, regardless of wrestling. Love, loyalty to each other, and respect, are the center of the Samoan culture.”