Abyss ready for another Monster’s Ball

During his time in TNA, “The Monster” Abyss has seemingly appeared in every gimmick match possible, from Full Metal Mayhem to barbed wire matches.

You name the brutality, TNA’s resident monster has felt it.

However, it is without doubt that his participation in the Monster’s Ball match is which Abyss is most recognized for. In the ten previous occasions this contest has been staged, since its inception at Victory Road 2004, Abyss has been a prominent fixture and this Sunday “The Monster” will once again experience the pain of this match, when he faces Bully Ray at Genesis. 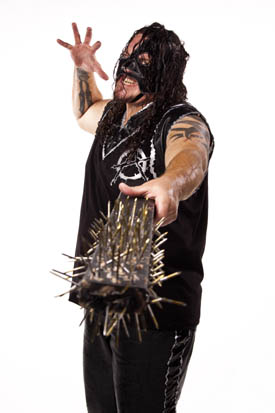 “I really am looking forward to this match for a lot of reasons,” Abyss told the worldwide media during a conference call on Wednesday. “I’ll tell you this much about Bully Ray though, he’s ready now to be world champion.

“He’s in the best shape of his career. He’s an extremely smart guy and could be a world champion at any time in TNA or anywhere in the world for that matter. The biggest being I believe is that Bully Ray vs. Abyss is a match that the people will want to see.

“Bully Ray’s work ethic is unmatched and he has a great mind for the business. He’s a very tough guy, you know going all the way back to ECW he’s had a reputation of being a tough guy and not to butter him up too much, but it’s all legitimate.

“He really has broken out as a singles wrestler. To be in the ring with him I think it’s going to be a war, no doubt about it.”

It’s a match which has huge ramifications for Abyss, as it was announced that if he loses the battle then the 6-foot-8 monster must re-join Immortal, the group he left back in October.

Looking to the contest, Abyss explains that he is proud of the legacy that the Monster’s Ball match has created, he also believes that with his previous experience, he knows what it takes to win these battles and is feeling confident.

“I’m really proud that Monster’s Ball has been established by guys like Raven, Rhino, myself and Rob Van Dam, we’ve really put it over the top as the signature match of hardcore wrestling.”

“The Monster” added. “I’m willing to put it all on the line in this match. I’m confident and going in both feet in, it’s going to be a brutal and barbaric match. It’s going to be hardcore like you haven’t seen in a long time I can tell you that.

“As far as mentally I’m going into this one more aggressively than any Monster’s Ball I’ve ever been in.

“Physically and mentally you have to get into the mind-set that you’re going to go out there and try to hurt somebody and they’re going to try to hurt you just as much. Then when you throw in Monster’s Ball and all the weapons you have to accept that this is not going to be just a regular match.

“A normal match is taxing on your body as it is but with a Monster’s Ball match the risk is quadrupled so you have to prepare yourself for a war. Physically I’m doing three miles every day for my cardio and just trying to keep my body healthy.” 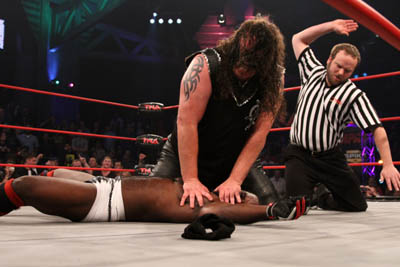 Abyss gets the pin.

Over the past few years, there has been a lot of discussion about unprotected chair shots to the head and concussions within professional wrestling, when asked if this changes his mind-set heading into Monster’s Ball, Abyss addressed the issue and had no hesitation taking it into account.

“This wasn’t an issue a few years ago in Monster’s Ball matches against Sabu or Rhino or Raven, those issues weren’t at the forefront so you didn’t worry about it as much from a perception standpoint as far as people being insulted by our chair shots when they see it.

“There’s no doubt that the issue influences the way you put things together, you know you can be smart and do very creative, very impactful things to avoid those risks.”

Having been seen as the man most willing to take dangerous risks since he joined TNA in 2002, Abyss is proud of what he has accomplished in the near ten years with the company. Although he does realize that by participating in these kinds of matches, could shorten his career length.

“I’m very proud of what my character has accomplished over the last decade. The character has matured over the years; I went from not talking to starting to express myself to splitting from Immortal.

“I think I need to be the kind of wrestler who thinks for himself now. Throughout my career I’ve always been influenced going all the way back to GoldyLocks to Reverend Jim Mitchell to Dr. Stevie and so forth.

Abyss understands that with his style and knowing Ray’s style, this Sunday will be a physical war and one which won’t be for the faint-hearted. It seems that TNA’s monster is not worried about the risks that surround such a dangerous contest.

“I think in the wrestling industry, this match has been the premier match of hardcore wrestling. This Sunday should be a test between two tough guys and I’m looking forward to being in the first Monster’s Ball match that has been featured in almost a year and a half.

“I’m looking forward to getting back to the nitty gritty, so to speak.”