The WWE Greatest Rivalries: Shawn Michaels VS. Bret Hart Blu-ray was one that I had been eagerly anticipating since its announcement several months ago, particularly because it was to include a sit-down interview with both wrestlers discussing all they had been through together. It doesn’t disappoint.

The interview itself was a little over two hours and was hosted by Jim Ross, who alternated between asking questions to both Shawn Michaels and Bret Hart. It’s very different from other WWE releases in tone, in part because the conversation is involving two wrestlers at the same time, but also because you have a sense while watching that there is no part of this that is scripted. 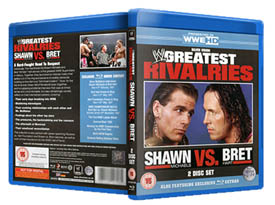 It begins with both Michaels and Hart discussing their beginnings in the WWE in the Rockers and Hart Foundation tag teams and then moved on to their early single careers. At this stage of the interview you could see a real sense of camaraderie between Michaels and Hart, as well as how close they were as friends during that time of their early careers. One of the more interesting aspects of their conversation touched on how both of them felt that the larger wrestlers during the late 1980s and early 1990s were more limited in the ring, but because they [Michaels and Hart] were smaller physically they were not being given the same kind of opportunities that others were being given.

The conversation next moved into Hart and Michaels becoming WWE champions and then the sections that I suspect many people will buy the Blu-ray or the DVD for: The beginnings of their problems and the culmination at the 1997 Survivor Series.

At this point of the interview, Ross asks some very pointed questions to both wrestlers, which I won’t spoil here. While watching, I could clearly see how difficult the conversation was for both men and there were even times I felt uncomfortable because of the emotional pain talking about these events had on their lives. However, neither Michaels nor Hart hide from their decisions or the consequences that arise from them and I have a great deal of admiration for both of them for that. In the latter portion of the interview, both Michaels and Hart discuss their making peace with each other and the resumption of their friendship, which ends the interview on a hopeful note.

As for the special features, there is a virtual treasure trove of classic matches, many of which I had only ever heard about like the 1991 Rockers vs. Hart Foundation Tokyo Dome match, the 1992 Hart vs. Michaels ladder match for the WWE Intercontinental Championship, and the 1993 Hart vs. Michaels Steel Cage match. The set also includes the Wrestlemania 12 Iron Man Match, Bret Hart’s WWE Hall of Fame induction ceremony and return to Raw, and Shawn Michaels’ WWE Hall of Fame ceremony — but there are some differences between the DVD and Blu-ray versions. Only if you buy the Blu-Ray version, you do get several Michaels and Hart interviews along with their 1997 Survivor Series match.

One of the things I would have liked to have seen included in this Special Features section of this set was some of the promos in WWE and WCW from after the 1997 Survivor Series and some discussion during the interview about the 1998 documentary Hitman Hart: Wrestling with Shadows. The lack of discussion about the documentary I felt was particularly glaring since it, and several interviews after the 1997 Survivor Series, were what brought a great deal of what happened between Hart and Michaels to light. It would have been interesting to get Michaels’ take on the documentary as I’m not sure he’s ever even said whether or not had has even seen it. In any event, it seemed a missed opportunity.

Still, for me the WWE Greatest Rivalries: Shawn Michaels VS. Bret Hart Blu-ray fills in the gaps that have been found in the other Michaels and Hart WWE releases. So for any Shawn Michaels or Bret Hart fans out there this is one I definitely recommend, especially the Blu-ray edition!