Definitions of the word “abyss” include: a place of punishment; hell; and, more commonly, a bottomless pit. But for TNA’s resident monster Abyss, he’s not heading downward, but rather looking to reach even higher heights. On the way there, he will be stopping in Windsor Ontario, where this Sunday, TNA presents a rare Canadian house show.

“It’s great to take the show on the road,” he said, in an exclusive interview with SLAM! Wrestling earlier this week. “Going to different places has been incredible for the company. To get in front of a fresh crowd that’s excited to see the show, and has a vested interest in the matches, it’s great. For the fans, and for the talent.” 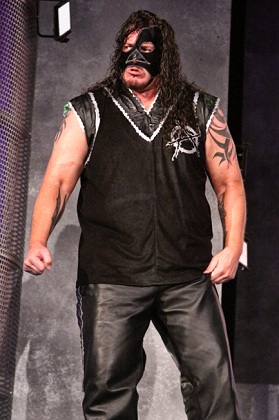 “I know the entire roster gives it 150% no matter where we are — whether it’s in the Impact Zone in Orlando, or on the road. But when it’s a crowd that doesn’t see us live all the time, they are energized, and (as a performer) it gets your adrenaline pumping, it gives you that extra ‘oomph’ before you go through the curtain. It creates a great atmosphere of excitement for people watching, and for the (talent).”

Which isn’t to say that Abyss (real name Chris Park) isn’t appreciative of the fans in the Impact Zone, the studio in Orlando where the company holds most of its TV tapings and pay-per-view events. But he does acknowledge that their regular exposure to the product can sometimes dampen their reactions.

“When you see something every single week, you’re not going to be as excited about seeing it as time goes on,” he explained. “I don’t care what kind of entertainment it is — wrestling, MMA, concerts, truck pulls — if you run it in the same building repeatedly over and over again, it can get a bit stale. If WWE taped in the same building every week, you’d have the same issue.”

Which is why Park is always looking for ways to keep his character fresh and exciting. Though he does acknowledge that it can be hard for a character that’s been regularly featured throughout the company’s history, and has just about done it all.

“The character has got a lot of different directions that it can still go down,” he noted. “There are always new dragons to slay. There’s a number of fresh programs (possible) with some great up-and-coming talent, guys like Gunner and Crimson. Guys like Ken Anderson that I haven’t worked a lot with, or Bully Ray who I’ve never really worked with. Personally, I’m as hungry now as I was nine years ago when I first started full-time with TNA. I’m very proud of what I’ve accomplished, like winning all four major titles, and being a main event heavyweight contender for so many years. I’ve worked hard, and it’s paid off. But I think there’s till so much more that I can do.”

One obvious direction could be in losing the character’s trademark mask, a change that Park is open to.

“Five or six years ago, I would have been more resistant to it,” he said about the idea. “But now I’d be open to it. The character has had a great run — both TNA and I have gotten an awful lot out of it. Losing (the mask) would let me create a new presentation of the Abyss character, give me an opportunity to do different things that I haven’t done over the years, put a little more of Chris Park in it.”

It’s a fine line, he said, in changing the character too much, since he wouldn’t want Abyss to be completely reality-based. Indeed, Park believes that wrestling is missing out on the larger-than-life characters that he enjoyed watching while growing up.

“I know the industry has gone more towards reality, and maybe more towards what MMA is accomplishing in being more real and presenting more real characters, and I certainly understand that. But on the other side of the coin, this is wrestling. And wrestling has been character-driven since day one.”

With Bruce Pritchard only recently taking over the company’s creative reins, it’s a bit early to know whether the company will move back towards that direction. Whatever the decision turns out to be in that regard, Park is excited about traveling down that road.

“I think the company is really on the right track. With the knowledge that Bruce Pritchard brings from his 25, 30 years in this business, I think he’s really going to bring an energized outlook to the creative end of TNA. I think Vince Russo did an incredible job, did a lot of great things, and helped us grow for coming up on ten years. Bringing Bruce in is just going to energize that even more, and make our creative even more enticing and TV-friendly, and make it something people are excited to turn in to see.”

That includes audiences in other countries. TNA is really focusing on global expansion, and Abyss currently is playing a central role in that regard. Specifically, in cultivating the strong working relationship TNA has with Mexico’s AAA promotion — Abyss is currently a co-holder of that company’s tag team championship.

“I think there’s a lot more to come in the future,” he predicted. “We do very well in the UK, India, and some other places. In some parts of the world, we actually outdraw Raw and Smackdown in terms of ratings. We want to expand that, and Mexico is a logical step. Mexico is a huge wrestling market, it’s a surprisingly gigantic country. When you go down there, and you see the AAA crowds, they’re fanatics. They love it, they really eat it up. To take the TNA brand and integrate it with the AAA style, the lucha libre style, that’s a chance for TNA to expand our worldwide market. I’m very proud to be part of that.”

What’s more, is that he’s proud to be able to show audiences that he can adapt and wrestle styles other than only hardcore wrestling, which he is renowned for, but which the company has downplayed in the past year or so.

“I miss it, there’s no doubt about it,” he said about his violent battles, “but you can’t do that forever. Don’t get me wrong, I thoroughly enjoy hardcore wrestling — I truly believe that it’s an art. But on the other hand, I’ve also enjoyed the opportunity and the challenge of showing fans and other workers that Abyss is a good worker, too. That he’s not just a hardcore wrestler that you can only book in a Monsters Ball match, or in a cage match. I can work, I can wrestle. I want to show, and I think I have shown the wrestling world that I can do either one.”

Being able to showcase his versatility, he feels, will be a benefit to him and ultimately open up more doors for him over the long run. His plan is to wrestle for another six to ten years, and then continue on in the business in a backstage role.

“Long term, I feel that I would be a great agent, great at creatively putting things together, relaying that to the talent and working with the talent to accomplish those goals. When I’m done in the ring, I definitely want to get into that side behind the scenes, and use my mind to help TNA grow.”

In the meantime, he wants fans to continue to enjoy his performances, and expresses his gratitude for their support of the Abyss character.

“I don’t get the chance to do a ton of interviews,” he said, “so I don’t get to say it a whole lot, but I really want to say thank you to the fans. Thanks to everybody who has supported Abyss throughout the years, and who has supported TNA. I hope you continue to support us, because even more great things are coming.”