Tara always busy, in the ring or out

Lisa Varon, whether she’s been Tara or Victoria in the ring, has never lacked for side projects. With a restaurant near to opening and a magazine column, plus her pet causes, she doesn’t mind the time away from the ring to be able to catch up.

And, with TNA Impact Wrestling always seemingly in a state of flux, there can be time at home. She has found that if there are no plans for her at the Impact taping in Orlando, Florida, that she would rather stay in Chicago. 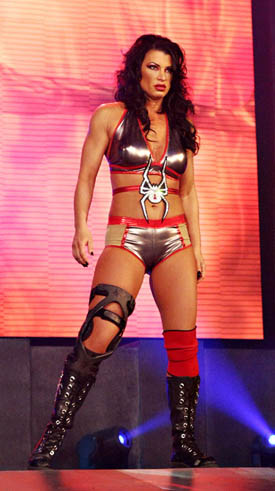 Tara heads to the ring.

“It’s probably better that if I’m not being used that I’m home, because I’m paying to be on the road — we pay for our own hotels, rental cars, food and stuff like that. I don’t want to be there and not be utilized, spend money out of my pocket for not working,” Varon told SLAM! Wrestling. “If I’m off, I have three dogs, I have a family, I’m opening a restaurant in three months here in Chicago. I’ve got a lot going on.”

She also tries to distance herself from the actual reports of what happened at the TV tapings when she isn’t there.

“I like to see it live on TV, I don’t want to really know what’s going on,” she admitted, and often tells her friends to hush on storylines. “I want to see it as a fan.”

That can be an issue for someone who is as much into the Internet and social media as Varon is.

“I’m a social media person. I love it,” she confessed. “I’m an addict on Twitter.”

Social media and being social are two different things, however, and Varon admits that things can get a bit awkward in person with fans, whom generally she likes to meet.

“The only time I don’t [like it] is when you’re eating in a restaurant and someone shoves a book in your face — ‘Can you please sign this?’ — and you’re eating with your hands, crab legs or something. I’m a messy eater!,” she said. “I love to eat, I love my food, you can’t come between me and my food.”

Food is an ongoing concern of Varon’s.

“I’m a foodie, so I always have to find that next fix to workout because I love food so much,” Varon laughed.

She’s been a part of owning two restaurants: Nikki’s Gyros in Lombard, Ill., which was sold when she moved to Miami; and Fat Tony’s Pizzeria in Louisville, KY, which was rolling along until an unexpected offer came in for the business that was too good to turn down. “My husband said, ‘Let’s sell’ and I said, ‘We just opened a year ago,'” she recalled. As well, she owned a custom car shop, Black Widow Customs, with her husband Lee.

Up next is Tara’s Takeout and Comfort Food, which will open in two or three months in the Lincoln Park part of Chicago. “I’m excited about the menu,” she said, not wanting to reveal too much quite yet. Another passion is animal rescue, and with three dogs, she is a dedicated pet lover. 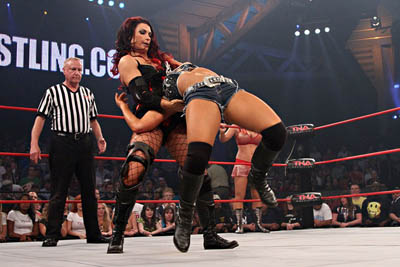 Besides the in-the-works restaurant, Varon has been writing for Chicago Athlete Magazine, about new-style workouts.

She described her goal: “Me being 40, how I fit into that tiny, little ring gear and still compete against the 20-year-olds and look young. I’m just like the average girl getting older — what can I do to get in shape? My metabolism is slowing down, so I’m going around to different gyms and going through their workouts for two weeks.”

Varon has pretty well given up on the side interest of mixed martial arts, though she continues to train in ju-jitsu.

“I still enjoy the sport though. I’m addicted to the show, Ultimate Fighter,” she said. “I wanted to be the first female to crossover. Brock [Lesnar] and Bobby Lashley , it was inspiring when I saw them crossover, so I thought, ‘I could do that too!'”

An angle was lined up with Randy Couture’s wife, Kim, and that went nowhere. An injury during a cage match with Mickie James changed things. “My elbow hyper-extended the wrong way and I tore my elbow. To this day, when I’m working out, I still feel a little twinge in it. I’m asking, ‘When is it going to be 100%?’ and they said, ‘It’s never going to be 100%.’ I had a torn ACL. I just think I have to be a realist. I need to do that sport being 100% healthy.”

As half of the TNA Knockouts tag team champions (with Brooke Tessmacher), Varon insists she isn’t done with wrestling — like she once was.

“When I retired from WWE, I thought I was done with wrestling, I really was,” she said. “But I still loved it, man, I still really loved it. TNA came at a perfect time. ‘I can’t do that travel anymore.’ They’re like, ‘It’s only five shows a month.’ ‘Really? That’s it? I can do that.'”

Lamenting the recently trouble that Travis Tomko, her former bodyguard in Memphis Championship Wrestling, got into, an attempted robbery to address his addiction issues, Varon talked about the way the wrestling business discards people.

“You’re never mentally prepared for when you’re let go. You’re always released or fired when you’re not expecting it,” she said. “I thought I was going to go through depression, but I left on my own terms. I had two more years in WWE, and asked for my out. I was prepared for it, so I didn’t go through that. I was nervous about it. I’m like, ‘Wow, when is this depression going to set in?’ I was ready to take it on. It didn’t happen to me.”

Perhaps that was because she still had a lot to do.