Davey O’Hannon didn’t quite realize how much work throwing a dinner to honor Angelo Savoldi would be, with proceeds going to the Pro Wrestling Hall of Fame. It’s all worth it, though, said O’Hannon; after all, it’s for the 97-year-old Angelo Savoldi. 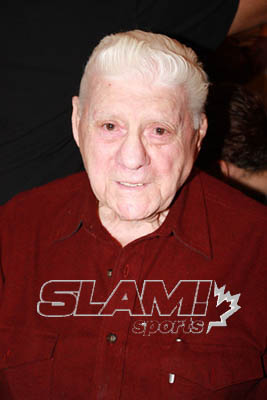 Set for Saturday October 1st, in Carteret, NJ at the Raddison Hotel, a number of top-notch names are coming out to pay tribute to the man believed to be the oldest living wrestler — and if he isn’t, then he’s certainly the world’s leading accomplished wrestler, with a World Junior Heavyweight title reign to his credit, among other accolades.

“I go back a long way with Angelo,” said O’Hannon. “My first exposure to Angelo, like a lot of us, I was a wrestling fan as a little kid, so I naturally saw him on television years ago. To me, he was just another bad-guy wrestler. The first personal contact I had with him, and I’m going to tell the story at the dinner, Angelo doesn’t even know this — I finally got a row one seat. I was probably 11 years old, maybe 12 years old, at the Asbury Park Convention Hall, down in New Jersey, on the beach. I’m sitting there and Angelo was a heel, and he’s doing his thing. I must have been razzing him a little bit. He turned around, he looked at me, and he said, ‘What are you, a boy or a girl?’ That was heavy stuff back in the ’50s! Here’s this guy actually reacting to me. My friend or my cousin went, ‘Oh, geez! He doesn’t like you!’ Why did he say that, though? I didn’t look that bad!”

Later, Savoldi gave the young up-and-coming wrestler, “Irish” Davey O’Hannon, some advice — get out of New York and work abroad before coming back home. “Sure enough, Angelo sent me on my way; back to Kansas City I went. Then I hit a whole lot of territories eventually. I was lucky, I at least got to make a living in some of them, and got really hungry in a couple of them. That was my connection with Angelo. When I came back to New York, he just treated me so well.”

Given that his pro wrestling career goes back to 1937, working alongside such legendary names as Stranger Lewis, Steve Casey, Danny Hodge, and Gus Sonnenberg, there won’t be many of his peers at the dinner.

Instead, most of the attendees will know Savoldi as an agent in the WWWF — and occasional wrestler.

Savoldi recalled being approached by Vincent J. McMahon about becoming an agent. “He was after me. He asked me if I would like to control all New England, in other words, the Boston Garden and all through Maine, Vermont, New Hampshire, all through that area,” said Savoldi from his New Jersey home. “[McMahon Sr.] he did all the bookings. I was the agent only. In other words, I took care of the show, I took care of everything else.”

He stressed that his relationship with “The Boys” that he used to wrestle with didn’t change when he became an authority figure. “I always treated everybody equal. I never made one guy better than another guy,” he said.

“Angelo was a good man, a very good man. I’ve known him since I came into New York in 1970,” said Dominic Denucci, who is coming in from Pittsburgh for the dinner. “Angelo was still wrestling once in a while at that time, but then he became an agent, and he stayed there a long time — until Junior took over. He always traveled with us all the time.”

O’Hannon is pretty sure that Savoldi went into his own pocket on a few occasions to help the workers who weren’t having good weeks.

A big feature of the dinner will be Savoldi’s large Italian family, including Mario Savoldi, who helped promote wrestling with him later in New England. 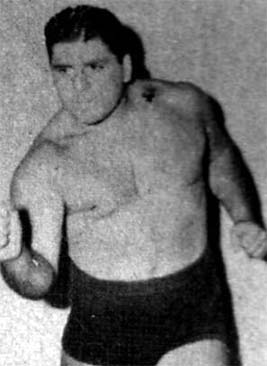 The Italian roots go deep, said O’Hannon. “Angelo found out that I was half-Italian. He used to come to me, and when it was time to go on, he’d say it in Italian. I’d say, ‘Angelo, it was my grandfather that spoke Italian, not me. I don’t know what you’re saying.’ He’d say something in Italian, wave his hands up in the air, and walk away. I’d have to get Denucci or Sammartino or somebody, ‘What the hell did he just say?’ ‘He said, You’re on. Get going!'”

Savoldi is not one to brag, but is looking forward to the event.

“I appreciate so much what they’re doing for me,” he said. “What they have in mind for that day, I don’t know.”

O’Hannon, a huge believer in the Pro Wrestling Hall of Fame in Amsterdam, NY, sort of walked into the responsibility for the dinner when he asked PWHF President Tony Vellano about when the next get-together would be.

“I opened my big mouth,” laughed O’Hannon. “I didn’t realize how easy it was to just lace up a pair of boots and pull on my tights and go wrestle every night, and then go home. … boy, am I learning a lesson on promoting stuff, ay ya ay.”

But, thinking back to lessons learned from Savoldi, O’Hannon took a deep breath and knows it will succeed.

“Angelo kept it very calm for us. It was an atmosphere of trust because we trusted him, we really did,” concluded O’Hannon. “We were fond of him. He was a likeable guy anyway.”