Franky the Mobster may end up becoming a bigger star on the small screen and silver screen than he ever was in the wrestling ring. Franky is one of the best-known independent workers in Quebec and has often been cited as one of the best unsigned talents in the business. He has also already appeared in a national advertising campaign for a mobile phone company and a couple of movies. 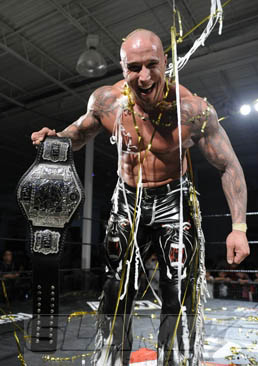 Frankie the Mobster after winning the TOW title in Montreal in June. Photos by Minas Panagiotakis, www.photography514.com

Franky is still active in pro wrestling but has devoted his passion towards other interests.

“To be honest, I am primarily motivated by money to stay in wrestling. I don’t even know if I would accept a WWE contract if I was offered one. I am more interested in pursuing a career in film,” he told SLAM! Wrestling. “I have been in a couple of Quebecois films and have also shot a scene with Trish Stratus. I would love to wake up in the morning and not feel like I had been run over by a truck.”

Similar to many professional wrestlers, Franky’s passion for pro wrestling started at an early age. “Growing up, I loved watching guys who were larger than life like Ricky Steamboat and looked like super heroes,” remembered Franky, or Marc-Andre Boulanger in real life. “I especially enjoyed the monster guys like Sid Vicious and Warlord. My biggest inspiration was Kevin Nash just because of his look and whole attitude.”

Franky would transform his love of pro wrestling into actually becoming a worker. “I started wrestling at 16 and was just a skinny runt of a kid. My in-ring work was just horrible. Around this time, I got into acting at high school and found I could interact well with the crowd and enjoyed it. I may have sucked at chain wrestling but was entertaining.”

More training would come from a local Montreal wrestler, Mark the Grizzly. Franky feels that many indy guys and smart marks put too much emphasis on the sport side of wrestling.

“You get a lot of guys who treat it like it is an actual athletic match. I have great respect for technical wrestlers but scientific holds and matches don’t draw fans,” he said. “I have developed into a reasonable technical wrestler but that is not my strength. I think fans want to be entertained and cheer and curse for guys who are larger than life. A pro wrestler should be someone who walks down the street and gets noticed. For me, I want fans at the end of the night to say Franky the Mobster.”

Any fan who has seen the 6-foot-2, 225-pound Franky the Mobster live will attest that he is memorable and often does steal the show. His bald head, massive arm tattoos and intense expressions leave a lasting mark. He has become one of the top draws on the indy circuit in Ontario and Quebec for the past ten years. Recently, he has started wrestling under the name Draggo. 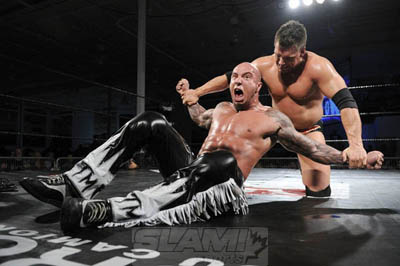 “Sometimes, I have little kids crying when I make my appearance,” he said. “This lets me know I am doing my job. I like to go up to them after the show just to let them know I am actually a nice guy. Franky the Mobster is an extension of my real personality — just amped up a lot.”

Franky’s unique physical appearance and demeanor have been both a blessing and a curse.

“I was supposed to wrestle a dark match for the WWE in Hamilton in 2009. The match was all set. Just before we were ready to go, someone from the WWE came up to me and cancelled the match. He said my tattoos and look would overshadow some of the other WWE talent appearing on the show that night,” recalled Franky somewhat bitterly. “I thought that was the whole point, to be memorable and develop a look that sets you apart. I felt I had done everything right and it left a very bitter taste in my mouth.”